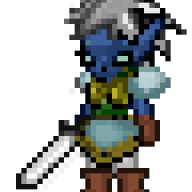 Alright, Sooo..
I've been tinkering aeay at this and I thought it was time I showed you guys some things I've discovered to be possible in IG maker.


As I've shown in the screenshots, this system allows for someone to choose which features their character will have, then play a
zelda like IG Maker style action rpg in which they're clothing and weapon change depending on what's equiped


all of this is in it's early stages so I'm finding out more about the limitations to this method all of the time.


The first thing I think we should know is that when a Gadget which is being used as a "Projectile" that is fired as a slave to another gadget, it will follow it's master gadget's animations in accordance with the order in which the animations are listed under the animations tab.

Now, what I have done is: first I made resources that would represent the different layers of Clothing, Body, Hair and Weapons.
Then, I used those resources to make 'Animation' resources in IG Maker in which all the per animation actions followed the same order as eachother.

In my game the animations are very simple and I only use walking sprites for most  things... however it's an action game.

in my game i actually use this on gadgets other than the player gadget, specifically my 2 3 and 4th player gadgets for which I have made a movement system I'll probably talk about elsewhere.

What is (gender race clothing hair)??

it is option a
shoot projectile 1

it is option b
shoot projectile 2

the initial registering action should be the What is?' action.
What is?' will procede to action a if a specific varriable is at a specific value.
for instance, I'll use:

if Value is 1 procede to 'it is option a'

if 2 procede option b

if Clothing Value > 2 procede to it is something else

-------
now what I would do at this point is make a duplicate of this gadget.
then tell the orignial to fire a projectile of this new clone and fire it as a slave for it's 3rd projectile or shot

now we would need to edit the clone slightly

If Value is 3 procede to 'it is option C'

if Value is 4 procede to 'it is option D'

now you would have made it so that the sprites will be set depending on a varriable. However, this is constantly active.
meaning the sprites are decided before the player ever gets a chance to input their custom parameters for the variables.

so I've solved this by telling is the following:

If  an action called "It is option X" is intiated, this action will procede to "what is it?" if the value is not egual to X

This would be applied to all of the actions which fire projectiles. In the cases of applying this to the actions that use a  > question
have it procede to "what is it?" if the value of the varriable changes to be = or < the maximum value which is represented by an action. For instance, on the action called "it is something else" which I mention earlier, I would tell it:

procede to "what is it?" if Clothing Value is 2 or less


I hope that made sense.

ask me anything you'd like to about it. I'd be happy to answer.