A door with many keys?

Andar said:
@Kisa135
depending on what does and what does not happen there are different possible causes, and NONE of those causes are in the screenshot of the event. If you specify what happens and what not we can ask for other screenshots that will help find the cause.
Click to expand...

@Andar As I said in previous posts, when the item goes down, all of that works fine.
What happens is, once the deed is done and the switch gets activated, I lose all control of the player character.
There's no way to screenshot it because everything looks perfectly normal.
It even animates what's supposed to be animated in the map still!
I just can no longer move and I've no idea why not.

Kisa135 said:
the switch gets activated, I lose all control of the player character.
Click to expand...

that means that there is an event that is activated by that switch and that blocks your control.
As I said it has absolutely nothing to do with what happens on that screenshot - you need to find the other event that uses that switch.

and that is why I said to always name switches and variables on first use - if it is already named you'll know that you can't use it for something else as you did now.

please check all other events to see where you used the same switch
Last edited: May 27, 2019 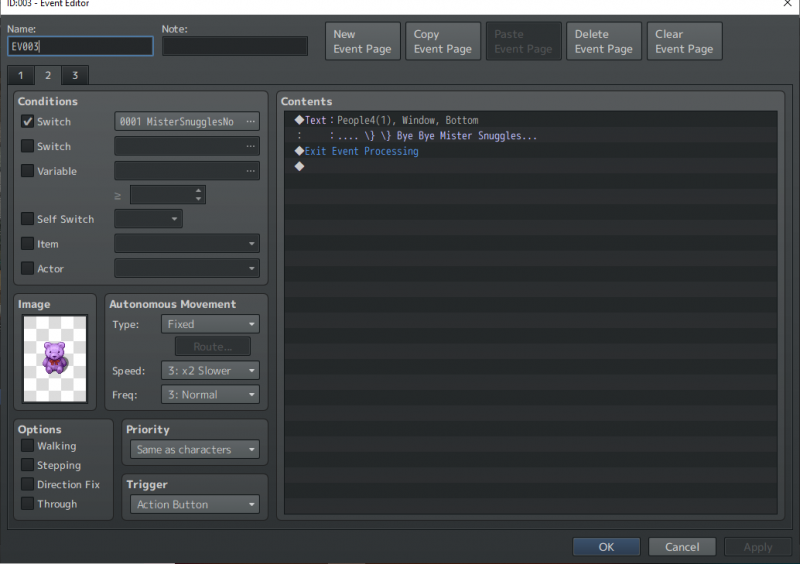 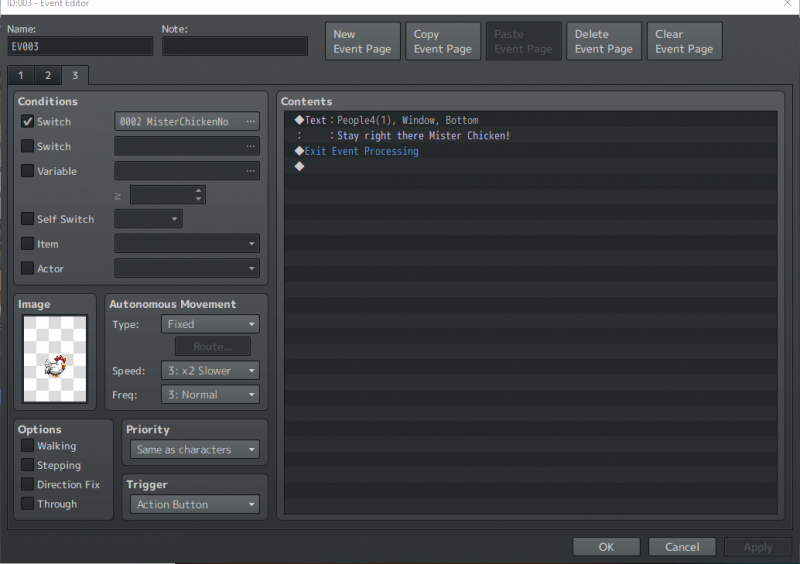 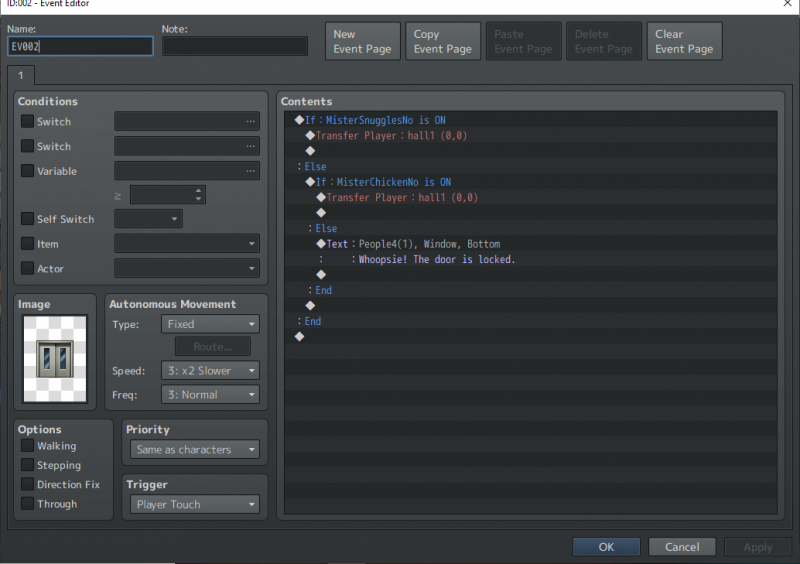 Andar said:
please check all other events to see where yiu used the same switch
Click to expand...

@Andar These are the only other place where the variables are mentioned in any way.

Kisa135 said:
These are the only other place where the variables are mentioned in any way.
Click to expand...

no, there has to be one other place.
by the way - exit event processing is absolutely useless there, because that command simply tells the engine to jump to the end of the event, and since you placed the command at the end it does nothing.

You need to find the other use of that switch, the one still not in the screenshots above. It can be
1) any map event on that specific map
2) any common event including some you only accidentally set to that switch but never used
3) a plugin that has been programmed to use that switch - in which case it has a property where you can set the ID of which switch to use and that property is currently set to 6.

And no, the fact that you neither remember nor found it on first search does not mean that it doesn't exist - only an autorun event or a plugin can block player movement by switch, and the fact that you're now completely blocked proves that this is the case.

Andar said:
no, there has to be one other place.
Click to expand...

@Andar
So, I don't remember touching Common Events in any way, shape or form. But, guess where I found it
Thank you for all your help despite my lack of comprehension!
Sorry it took so long, it seems to be working now!

Broliant112
yo i made a post but it hasnt really gotten any answers so uhhhh
Yesterday at 9:49 PM •••

BurningOrca
Finished switching to a new PC. Now I could potentially start working at projects or plugins again if I feel the motivation to do so.
Yesterday at 4:54 PM •••

(Especially after I cooked up a thing that prevents you from re-applying deadly states more than once in specific occassions.)
Yesterday at 4:24 PM •••

The Voice... They usually show up to talk to you about leaving your mark on the world, which is one of the major themes of my game... How will you be remembered by society.
Yesterday at 11:52 AM •••