MikePjr said:
I'm pretty sure that's why early computers where white text on black screens.. rather than white screens with black text..
It's just always been easier on the eyes.
Click to expand...

And various shades of amber and green. But we digress lol.

Yeah, i struggle as well with my vision.
Bright screens just make my head hurt.. any time there's a dark theme, i switch to it.
So i'm glad there's the same themes in this new one.

I love the brighter colour schemes for the world maps, that gives me hope that I will enjoy this RTP. I've loved every RPG Maker RTP except for MV at the moment (well I've not looked at 95 properly but every other RPG Maker RTP I've seen I liked excluding MV), although I do love MV as an engine.

Even if most or half the RTP is MV I'm excited about this. And if some of it isn't but still similar to MV but different, well I might like the similarities anyway.

And I still like MV's added attention to detail, but I really like the tileset look for MZ.

4 layers + event layer, and I assume, parallax layer (maybe even more than one? *wink* *wink*). With full control to boot! Well, that sounds great.
I hope to have some more control with the tileset tabs too but we’ll see. It’s already a huge step 8n the right direction.

Also, yummy system tabs! More system options is something I’ve been wanting for some time now. Especially, resolution option and fullscreen on startup... I’m excited to see if they are in there somewhere.

Well, while the info was a tad underwhelming, I'm still excited to see what else MZ will bring to the table. The layer mapping already has me in a good mood.

Look at us, doubters and unbelievers a few hours ago, and now the hype train is already starting to gain steam, it seems.

Honestly I'm kind of dissapointed... Tiles and character looks really bad, HUD/GUI looks like MV's, I bet there's not much new addons according to the desciption (same things as always). Imo a better step was to improve MV... but, well... we'll see.

Not too impressed yet but I like @Touchfuzzy confirming those tidbits. I will of course wait till all the other information is out before making a final judgement but I will 99% pick this up anyway as I do with every new maker unless it's like $200 USD or something.

My INTJ analytical mind is thinking there will be 8 more weeks of information. There are 8 "get ready to be wowed statements." So I'm guessing each week they will wow us with one of the categories. That would put August 6th as the last update and guessing the release the following week around the 10th-15th of August. 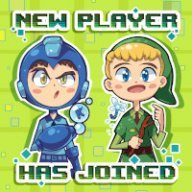 Excited about this news .
I wonder if there will be a lighting system built-in that uses pixi lights/shadows?
Or maybe various fighting options? ABS , In Map active-time battle etc ?

To be honest, I'm impressed. And those functions are just making be even more sure about that. But most important for me is the price, and I'm hoping not to pay "little fortune" for this.

rafman2k said:
Excited about this news .
I wonder if there will be a lighting system built-in that uses pixi lights/shadows?
Or maybe various fighting options? ABS , In Map active-time battle etc ?
Click to expand...

After the popularity of Terrax's lighting plugin, and the 8GB RAM requirement, I'd assume basic lighting effects of some kind are in. That's just my prediction, though.

Hmm, the last (and only) time we had a system 2 was in Rm2K3 because of the ATB.. I'm really curious what's going to happen there.

Maybe system 2 is an expanded menu customisation tab. A man can dream.

Considering how i can put what ever tile i want on what ever layer i want... i might not need auto tiles..
It gives a bit more .. leeway for making maps the way i've tried to before.
In MV i was using A5 tiles for construction of landscape type things.. but i'd always run out of space for things..
It was one of the issues i kept having which made me eventually step away from MV.
If i can't get the auto tile style i prefer back.. then it's the next best thing i suppose.
At least this way, i can use tiles on the BCD or E tiles on the bottom layer to help make up for it when it comes to complex coast lines and forests that aren't so blocky.
I'm not a fan of how squares a lot of the auto tiles end up being...
The entire reason i keep screaming for XP Auto tiles back, is because when i used those back in the day.. it was real easy to prevent the landscape from looking blocky.
So, the layer options at least alleviates some things. So that's good.
I'm feeling a little more positive about this.
But i'm still waiting until all the information is finally revealed before i let myself get real excited..
Once everything is out on the table, i'll make the choice of buying this or not.

Also, an added bonus bit of information: Just because you don't think something is in because the "screenshots" show something, doesn't mean that it isn't in. There is at least one thing I saw mentioned that someone was sure didn't exist, but actually does as a database option.
Click to expand...

I was not wow-ed by today announcement, ,but this information get my hopes high again. database is one of my concern in MV, so any improvement is welcome.

this eventing mode looks neat but need to see how it looks like in the real engine to see if it's really useful or just gimmick.

I know, that this can be kinda harsh and rude, but this marketing company are really lame.
In Russia there is two strong communities ("Light Zone" and "Neutral Line"), that interested in this brand new RPG Maker.
But! There is lack of any userful information about marvelous features, so... For now it looks just like ripoff from MV with nothing really new.
If your product looks almost identical like previous, you need to show off your trump cards first to explain, why customers need this product, not MV.
I was not impressed today and now i need to wait another week. You know what? This is not cool. This is tedious.

OffTop: Glad, that today i can do some weekly jobs in Deep Rock Galactic and today is new update are out for Warframe...

Week 1: announcement of the announcement.
Week 2: "We will reveal more details in the coming days. Get ready to be wowed!" (+ 5 pictures of the engine looking basically the same as RMMV)

I'm so glad the new RMMZ "features a test play function that makes it very easy to check the workings of your game while you are creating it". Great news

I mean MV has a play test feature.

With the extra mapping layer confirmed, that's really nice. I always hated how limited mapping felt in MV, coming from RM2K3. Here's to waiting for the next update announcement.

Seriously, we deserve to be memed for the "prepare to be Wowed" bit. Like saying it once would have been fine...