A Punishment for Mai 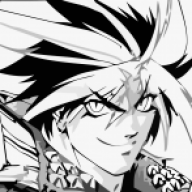 Hello everyone,
after a long (yeah i must apologize cause it took me too long) time I finally had time to get the game i'm working on introduced here...


[IMG]http://media.tumblr.com/56bb0ec1235a2195bcd2de8846d7b17c/tumblr_inline_niabweAR1w1t98aj5.png[/IMG]​
​
A Punishment for Mai is a Thriller based action-rpg game with a horror background atmosphere. You control Mai; a girl which is trapped in an unkown town, fighting to find a way out of there...

Mai is a 28 years old young woman with a sad and dark past from which she remember almost nothing but a deep pain.
Without knowing how, or why, Mai wake up one day in a motel room, wondering, she comes out only to find that she's in a place that she never saw on her life and which has nothing to do with her usual reality.
The girl, who initially thought she was alone in this city, ends up discovering that there is more life than she thought: monsters, demons, strange people and, last but not least, a kind of sect of people in cassocks who seem to be the 'lords of the place '. Under such conditions, Mai, plucks up courage and starts to seek for a way to get out of there, but unfortunately for her, after several months of searching she finds nothing.
However, someone has been watching Mai most of this time, a mysterious man who appears infront of her. He calls himself the 'Driver' and hides his face behind a mask.
Despite the initial distrust, Mai has no choice but to accept the help of the 'Driver', which, promises he will help her get out of the town.
Time passes and Mai begins to lose patience, strange dreams beset her, surviving in the town is becoming more dangerous, the doubts of what the town is and why is she there and above all that, a deep sense of sadness, are making the she starts to doubt on his sanity and to top places of her previous life started to appear in the town, including the house where she lived before appearing here.
All seems lost, but one day the 'Driver' appears and tells her it's time to leave the town, but first she shall pass a test...
Click to expand...


Mai was the youngest of three sisters. She was living happily with them and with her parents also until one day, seven years old still, her parents decided to buy an abandoned hotel and went to live in there.
After a month living in the hotel, Mai's mother found a strange book and, thereafter, everything changed. Her mother began to behave oddly, as if nothing mattered to her, except the book; Shortly afterwards, her father disappeared leaving no trace and, being not out quite, her two older sisters fell ill and died strangely. This left the poor Mai, 9 at that time, all alone, with her mother increasingly isolated in herself.
One day, while cleaning, Mai found her mother conducting a strange ritual. Her mother found Mai was 'spying' her and forced her to participate in the, increasingly more frequent, rituals.
At the age of 10, tired of the barbarism carried out by her mother and having to involve in it in silence, Mai denounced her mother to the authorities. Her mother was jailed but soon after that, disappeared from prison, inexplicably.
Mai, meanwhile, following the arrest and subsequent disappearance of his mother was completely alone and went to one hospice after another until she got full age. After leaving her last orphanagem she became a wanderer until she met a man with whom she established a relationship. After some time living together, Mai got pregnant.
It seemed that, Mai finally would be able to be happy again, but all shattered during the second month of pregnancy. Her partner disappeared and she, all alone again, sank completely in the darkest recesses of his mind.
Suddenly, a day like any other, Mai went off to sleep, but when she woke up, she wasn't on her home anymore...
Click to expand...


Since the death of his mother, Lucy became an introvert and lonely girl. This was also getting increased, due to her inferiority complex caused by her sluttering.
She had no friends, but she wasn't alone, because her father supported her at all times.
Time went by, Lucy and her father were increasingly inseparable and this helped the girl to not be sad, but then everything changed.
Her father began to receive phone calls from an unknown woman and, from that moment on, everything went wrong. He became unfriendly and violent. He spent hours doing strange rituals and talking to that woman in phone.
Over time, Lucy, just like Mai, is forced to participate in the rituals, but unlike she, Lucy did not have nor has the power to bear with those and ends up suffering a lot.
In her eighteenth birthday, the girl finds, during an argument with her father, that she carries some kind of power in which the unknown woman from the phone is interested. The discussion rises increasingly in tone and ends with her father forcing her to participate in a human sacrifice.
During the grisly ritual, Lucy falls fainted. During hours she suffers overwhelming nightmares. When she finally wakes up, discovers that she is in a different reality, that she is all alone and that someone locked her in that place. Like so often throughout her life, Lucy huddles in a corner staring off at infinity and says nothing...
Click to expand...


This strange man hides his face behind a mask. But his face is not only that is hidden because both his past and his intentions are totally unknown.
It is not known how long he's been in the city, but based on his knowledge from it, is sure that he's been long surviving there.
One day, by chance he discovers Mai, as she was looking for supplies. The willpower he perceives in her, somehow attracts him and from that moment on he spies on Mai to see if she is strong enough. When finally he believes she is ready, he comes to her and manages to convince her that he knows how to escape the city.
The driver is not a playable character in the adventure, however, has two main uses. The first is, that transports Mai forth with his car. And the second is that he provides her with ammunition and other items through his 'store'.
Click to expand...

​
Gameplay​
​
As stated before, the game is an Action-rpg. So i'll talk about some elements it has:


Every "thing" you can interact with has a range and when the player enters it, this symbol appears above the "thing":

And when the player leaves the range the symbol disappears of course.

There are more aspects about the gameplay that i can talk about but at the end I'll explain why it's better this way...

​
Here's the Launch Trailer for the Chapter I:

​
​
Fanart​
​
Yeah we even got some fanart already from some friends:


Links​
​
So here are some links to some media feeds we have and the complete profile for the game:

Good luck with your project!

And indiedb is like a data base of indie games where you can add your game and keep it updated (posting news) so everyone interested can follow up. Usually when you write a new report in there and get published in the frontpage your game gets in a high position like the top 100. But give it a few days and it's back to 1000+ position

So here i am with more info on the game...

Magic​
As mentioned in earlier reports, One key thing that generated doubts to Zero0Ichi when he was designing the game was the magic aspect.


Zero0Ichi:Should i add magic to this kind of game? Magic in a horror-game?!...
Click to expand...

Zero0Ichi:If i had the chance to add it, i will
Click to expand...

and so the game end up having magic.
So let's talk a little bit about Magic, because there are some highlights.

what is special in that red box?

Well, it's an object the player can pickup and throw.


More Media​
In this report there are more media to see!

More info as we're getting closer to the chapter 1 release


Levels​
The first part of this system is quite straightforward. It's the classic old-school leveling-up system. You defeat enemies, they give you experience and when you get enough of it you then level up and this results in your parameters growing up.

In APFM, the levels range from 1 to 10 and they require an, increasingly, amount of experience to acquire them.

Through leveling-up your parameters get increased but you won't learn any skill or Magic in this way.

Of course, in this aspect there are some important differences too for every character, since, while Mai has a focused physical abilities (HP, ST, etc) growth, Lucy has a growth more oriented to her magical parameters (MN, MD , etc).

Finally, note, there's one more thing which will lead to the 2nd part of leveling-system. Leveling up will provide AP. You'll get 1, 2 or 3 AP depending on the level, which then, can be used in another section of the leveling-system.


​
Upon examining it you'll get teleported to the *board*.​
The *Board*​
Once in there, you can move freely over the place and interact with all of you *copies*. Everytime you interact with on of them, you'll get the option to learn or forget an ability.​
[IMG]http://media.indiedb.com/images/articles/1/181/180226/auto/Shot_016.png[/IMG]


​
You can learn and forget any ability at will. This allows you to use what you see fit in every situation.​
Abilities you can learn are: Healing Magic, Attacking Magic, Status Ailments Magic and Parameters' Bonuses.​
Differences

Today We'd like to inform you all that the A Punishment for Mai Chapter 1 release is really close and also that we've some surprises and info to show you in the next few days.

As you probably noticed already, we're changing the layouts and stuff on our social networks and blogs to give them a more appropriate look.

To end this post we will let you take a look to a sneak peek of the trailer for the APFM's Chapter 1. Hope you enjoy it.

PS. I dunno if this is allowed to keep updating this topic everyday (i mean for the rule that says that bumping is allowed only after 72 hours) so due to that pleas follow the incoming news on the official blog:

So this kind of "mini special event" for the release of Chapter I keep on going as you may seen in our blog/twitter. But today it's in some way special.

Right now i'll give you this and then later today i will edit this same post to add some more important info:

Launch Trailer with a final surprise.

Here's the trailer for A Punishment for Mai Chapter 1:

So here it is! Chapter I NOW AVAILABLE

TheGentlemanLoser
"but what even is an API??"
42 minutes ago •••

ImaginaryVillain
Poppet Quest stats so far.. 61 views, 20 downloads, 3 reviews, 1 comment, 4 followers gained.... Hmm...
From a content creation standpoint, games really have awful traction. At least the experiment is interesting, time to see what adding Twitter into the mix does. Maybe the supposed 1,290 followers I have on it will prove useful. Then I'll test out Insta.
42 minutes ago •••