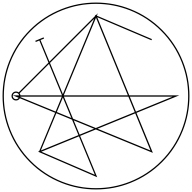 The protagonist Sol wakes up in the Void which is a place where he goes after he decides to end his life by jumping off a bridge due to loneliness and severe depression, he then is greeted by his Holy Guardian Angel who explains where he is and asks him that if he regrets his decision. Sol tells him that he does and that he wants another chance in life so he can do things better.
In order for Sol to get another chance in life, he first must prove that he is worthy by completing a set of challenges that were given to him by Chaos who is also known as the Creator of All.

Sol - Your typical socially awkward introvert that has no friends or girlfriend and is a virgin.

Holy Guardian Angel - They were created as a guide, a source of knowledge and wisdom and a protector for all humans.

Chaos - She is known as the Mother of Life, the Creator of All and God.