A Thief's Voyage by Walldeaf

An easy old school RPG with a sideview battlesystem, lots of character development and a solid story.

The game is complete.

and I'm very proud to say that it's done.

It's ready to be launched.

The date will be:

Hope to see you then. 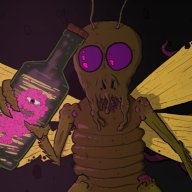 Looks promising! Made with care.

Good luck with the launch!

review after playing the demo: the unbalanced sound design does get annoying after a while.
you know this to be an issue, because you've put that warning at the beginning, and there's no options menu.
if you can't find a plugin for that, at least edit the audio file to be within acceptable levels... you don't need a degree in sound design for that, and there's audio programs available for free.

which ties to my second issue: I can't hear myself think between the loud music, and not knowing where to look in the menus or the battle screen.
some things happen too fast to notice, and some things aren't intuitively where they would be expected, for example the actions for each character in the battle scene: some have their actions above "defend", others are the other way around.
be consistent.
if you're using a plugin to add the extra actions an they conflict with the standard order, ask the creator for a fix, or how to do it yourself.

all of that, the music, the party management, the dialogues, all ties to *pacing*.
if the scene involves a key dialogue, lower the music.... take control of the dialog automatically and add timings for better pacing... make sure the player knows what's going on.
if the scene is a battle, use battle music, but don't be loud.... you want the voice acting to be noticeable (THE one scene where you have voice acting, and it's being muffled by the music).
that, coupled with intuitive menus, makes the player forget about the interface and focus on the actions.

Thank you for your input.
Most of the things you mention are fixed in the complete game.
Sorry that the demo wasn't to your liking, or as much as you expected of it.
In the end, it's a matter of taste.

I've moved this thread to Commercial Games. Thank you.

Your "save game" can be carried over to the full game.

Metthink
The main game of my trilogy/saga 50%OFF on Steam..... its now or never more

sleepy_sealion
I swap between Ace and MZ so I can stay fresh but - what do you mean you can use subfolders in the plugin's folder for easier organization!?
Yesterday at 7:29 PM •••

lianderson
Did some new music again, praise be. To the next song!
Yesterday at 2:55 PM •••