I am working on a game that makes a huge emphasis on interactions with NPCs.
In my game, players will talk with NPCs for various reasons: to assemble them into their party, for healing, for stat increase, convert. 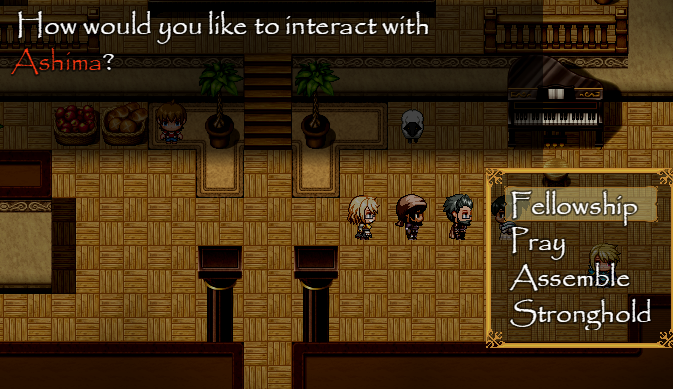 For sake of distinction there are two different types of NPCs: Enemy NPCs and Friend NPCs

In my game, players need to interact with enemy NPCs in order to convert them. They must go through a dialogue tree and select the right choices according to the enemy NPCs personality. As the player interacts with enemy NPCs, they lose energy (because talking with people can be draining!!!).

In order for the player to regain energy, they must go back to the Sanctuary and talk the friend NPCs. When you talk with the friend NPC you gain energy. After talking to the friend NPC certain number of times, you will run out of things to talk about and must come back later to continue talking.

This is all very possible with eventing, but it becomes difficult because I have to create special configurations for every npc. Tedious

If you like the idea, please feel free to take it and make it your own. Add features, subtract features, etc.

I would love to see this in the community. I really hope someone can make something like this for this will greatly benefit us. I am more concerned about seeing this for us, not specifically for my game, but it is something that I do want in my game (don't get me wrong).

Thank you for your consideration

If nobody else has picked this up by the time I've finished my current commissions and managed to remember all the other stuff people wanted that I've forgotten in the meantime, I'd like to take a crack at this one.

I'll take you up on that!
Wonderful, I would love to see this system going.