Hi all. I'm having an issue with Moghunter's Chrono ABS. No matter what i've tried i can't seem to figure it out. What happens is when I attack i only get 2 framesof the weapon animation. is there a way to fix this?

Have you changed anything? Scripts, events, images? If you redownload the demo and play it without making any changes, does it do the same thing? I'm guessing because nobody else is complaining about the same issue, it's got to be something you've done in your project.

Mog hardcoded 2 frames in the "this._user.poseMaxPattern" variable. Use this code to change the maxPatternABS function so it can choose the frame number dynamically

i've had to restart several times before i follow the same scripts as usual. I looks something like this. (Posted Gif) it will play animations 2 and 3 but never animation 1.

Restart said:
Mog hardcoded 2 frames in the "this._user.poseMaxPattern" variable. Use this code to change it so it can choose the frame number dynamically

omg you are a saint. thank you and i'll implement this asap!

wait. it supposed to go into MOG_chronoEngine correct?

mog doesn't wrap his code so you can just toss it into a plugin at the end, or replace his existing Game_CharacterBase.prototype.maxPatternABS

Restart said:
mog doesn't wrap his code so you can just toss it into a plugin at the end, or replace his existing Game_CharacterBase.prototype.maxPatternABS
Click to expand...

alright now ya lost me.

Just put it in a file called 'tweak.js', put that at the end of your plugin list, and you're good.

Alternatively you can just edit MOG_ChronoEngine.js and replace his existing function

Code:
with the one I had above.

yeah i tried the 2nd option first and that did nothing i'll try the tweaks.js idea. 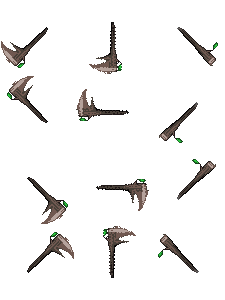 I'm confused about what image you're using as your character's pose for this; that spritesheet only has a weapon.

Can you show me a screenshot of the weapon's tool event?

Why do you have the pose duration set to a negative number?

Restart said:
Why do you have the pose duration set to a negative number?
Click to expand...

KEN Tutorials for Chrono ABS. should i change it?

@Chainer07
It adivesed to make your maps inside the demo game while the weapons and tools
are on 1 MAP and that is been called. creating one from scratch brings more problems
alone and doesn't function properly because mistakes are very easy be mad with it.

ShadowDragon said:
@Chainer07
It adivesed to make your maps inside the demo game while the weapons and tools
are on 1 MAP and that is been called. creating one from scratch brings more problems
alone and doesn't function properly because mistakes are very easy be mad with it.
Click to expand...

i was trying that for a bit but i easily lose track of myself with all the added extra stuff i wouldn't use. 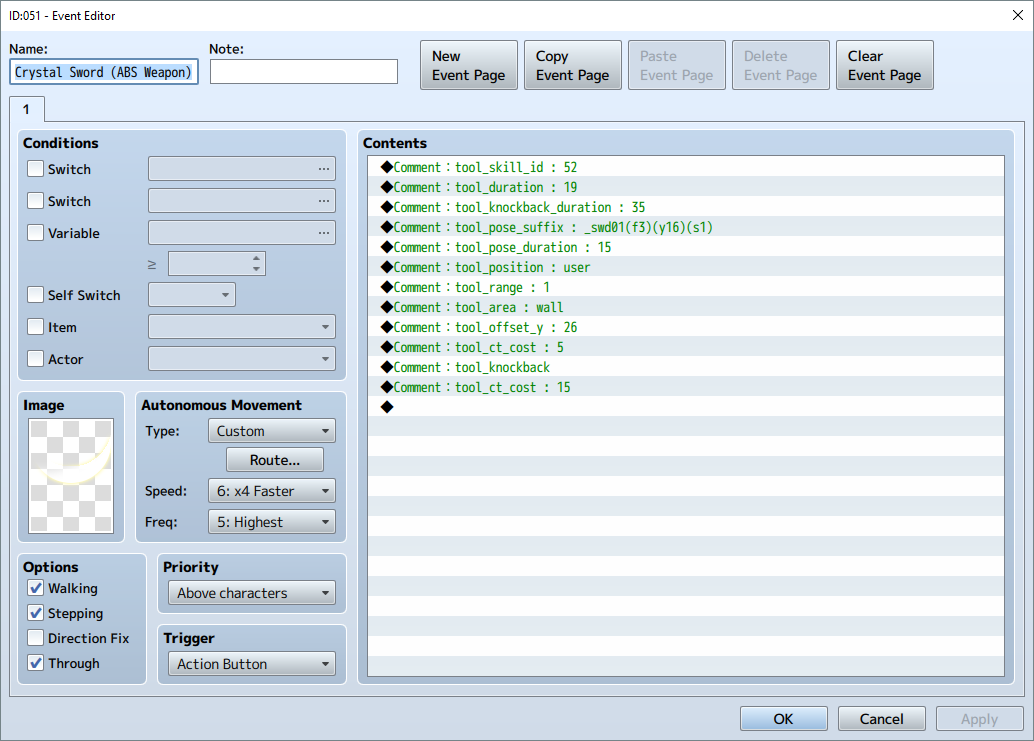 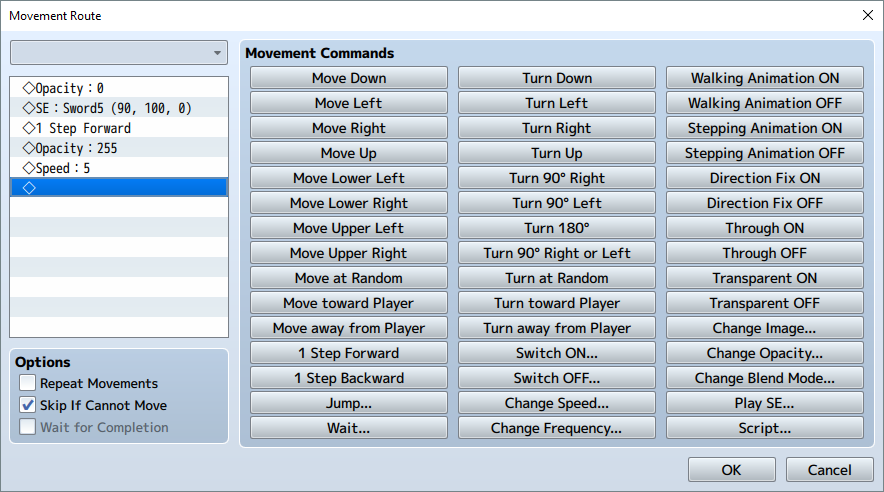 The tool_pose_suffix determines what animation your character will use while using this skill. For instance, if you put in '_stab', and your character's image file is named 'bob.png', it will look for the image 'bob_stab.png', and play that animation whenever you use this tool.

Normally this is capped at two frames long because mog wanted it that way :shrug: my code unlocks that to have higher frames for your poses.

tool_pose_duration determines how long bob plays that animation, measured in frames. It'll keep bob frozen for however long the specified period is.


Now, let's talk about the tool itself.

The animation speed of an object is by default based on its _movespeed stat. The actual velocity doubles every time movement speed goes up by one.

The speed animation frames cycle is a third, different number, with a delay based on [9 - this.realMoveSpeed())]*3

In addition, mog has an a multiplier option to add fine control on an animation-by-animation basis; if you put (s3) in the filename for an image, if will update three times as fast, you can put whatever number you want in there.

Short version is, if you want to show more frames, either
A) make the weapon event last longer, so it can show all of them (which is tool_duration)
increase the event's speed, so the frames go faster
C) edit the file name of the weapon to include (s2) or (s3) or whatever and speed it up that way.

gabrieldiastche
Let's promote our amazing artists in RPG Maker community! I posted right now about my game Phil Alone on Twitter and I decided to thanks Lime Zu, the amazing artist that did all the pixel assets for my game!
15 minutes ago •••

Froggo32
I just realised that the reason behind me not being able to make a game may be the lack of my original resources. I just dont like the look of MV faces and sprites, lol. Guess I will have make my own art.
Today at 5:20 PM •••

MrKiwi
So here's a fun/tragic fact about me: I have an awful memory. But to be correct, I have memory "leaks". My memory is actually amazing, my issue is I can't keep memories for long, in fact, I once forgot my name.
Today at 3:22 PM •••

taarna23
The neighbourhood cats brought me a kitten today. They sat him on the step and semi-circled him. He's adorable, but now I gotta find somewhere for him.
Today at 2:23 PM •••