The game has been released!


Hey guys. I've had a player mention a problem with saving the game (probably a Win8 issue) when it's installed in Program Files folder. The game has a script included that puts save files in the AppData/Roaming folder on the computer, but seems it can still give issues on some computers. If you're experiencing this problem, try moving the game folder from Program Files to another location, like My Documents or My Games. It should sort things out. Cheers
Screenshots:

The last king was killed over 400 years ago and the global rule of the land ceased to exist. Slowly over the years the law and order started to subside, people began to divide amongst themselves, big cities were gradually gone and replaced with smaller settlements, and the whole land started to slowly degrade. Many believe it’s because the angel kind have abandoned it.

Now the bandits roam the roads and wild animals roam the fields. The only safety can be found in smaller villages, where groups of people have banded to work together in order to survive. The relations between the different sentient races are very marginal and fragile. Some have been at long conflicts with one another, at times erupting into full blown wars. A holy Order of Atonement has been trying to keep the people together, but even their influence is limited to a handful of villages. And to top it all off, many believe a “vindicator” will walk the land one day as a punisher of all the sins and bring forth a swift end upon it.

That day has come.

The story is split into two different teams of protagonists, each one following its own path.

Bio: A nomad by nature, Nail refuses to settle down in any of the villages and believes that he can accomplish a lot more if he simply fended for himself. Often aimless in his pursuits, Nail prefers to live each day separately and doesn’t think there’s much future beyond the rewards of the present day.

Weapon: Long sword and a shield

Bio: A highly reliable paladin with firm moral values who often supports and carries out tasks for the Order of Atonement. Apart from being a fighter, Anrid also knows how to use healing and supportive magic in battles.

Bio: Nail’s older brother. Unlike Nail, Kanden prefers a simpler life in a village with his girlfriend, doing regular guard duty and helping to keep the village in peace. He’s a skilled fighter and is highly respected by other guards.

Bio: A rather introverted and nerdy scholar. Meya likes to learn things, especially those that are related to magic. Often very soft-spoken and doesn’t like conflict.

Weapon: Occult Blade (can be enchanted)

Bio: A cynical sorceress with a dark humour who is always after more power and magic. Largely disliked and shunned away by most Humans, Elleria has to use cunning and trickery to get things her way.

Weapon: Curved blade and a gauntlet

Bio: A Karmit bodyguard summoned by Elleria. Just as others of his species, Gashrun is a proficient fighter and is absolutely obedient, but there’s always a degree of mystery to him and his intentions.

Bio: A skilled and somewhat talkative mage. Kizu seems to always have something to say about anything and often enjoys sharing his knowledge of magic and the creatures of the land.

Bio: Nobody knows who or what Habach is. He is a wild, untamed monster of some never heard of species, but at the same time he displays obvious signs of sentience and can even speak.

I've enjoyed all of your games to date, so I'm looking forward to giving this a go.

I hope everything goes well. I'll be keeping my eyes open for future updates.

Thanks guys. I really appreciate the support. This game has already been demanding quite a fair bit of work and this is only the beginning, but I do love working on it very very much.

The first good news is that most script-related problems have pretty much been solved.

The second good news is I've got a bunch of screenshots for you all of the next area that I've been working on (which will be the final area of the demo section of the game). Welcome to Herseras Wood - a wood that grew on blood that was spilled in a huge battle many decades prior to the game's events. Because it grew on blood, many plants in it are unusual. Some have nasty self-defence mechanisms, whilst others have developed an appetite for flesh.

A small announcement. Since the development lately has been going faster than I thought, the demo will be released sooner than planned. I am now expecting to release it sometime in the next week. Watch this space.

I look forward to playing it!

^ What the totally stranger guy above me just said (this stranger not The Stranger! I mean...ok, let's quote both). 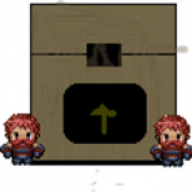 Looks like it could be an interesting twists to an rpg

Act 1 Demo has been released!!!

The main download link is HERE (~146 M, which includes all the necessary RTP components to play the game (in order to keep the file size down, it's not the whole RTP, but only the stuff that's needed).

Alternatively, if you've got VX Ace RTP, you can go HERE (~93 M for the smaller file size.

I really appreciate all the support so far and am hoping to hear plenty of feedback on this demo. The demo includes the entire Act 1 of the game for BOTH teams. There's approximately 1 hour of gameplay for each team, making a total of around 2 hours.

Some possible topics for feedback:

- Did you enjoy the game so far? What was good about it? What was bad?

- Any bugs, errors, and crashes?

- Any reasonable improvements that can be done on the presentation and the UI?

And finally, I shall also leave you with character drawings by Ehcs of two main characters, Nail and Elleria.

I'll probably play it in a couple of hours or so and submit my thoughts about it tomorrow (after work).

Congratulations for finishing the demo Matseb! Looks great so far.

Thanks Dalph. I hope you like it. Your feedback has been very helpful on my previous games so far, so I'd love to hear what you think of this demo.

Ok i played the first bit. Either tho i really really suck at rpgs or this was extremely hard on normal.

Heya Zrk03. Thanks for trying out the demo. Which part of the game have you played through so far? Is it the first dungeon or the bit after? Also, whose team are you playing as at the moment? Nail's or Elleria's? I did try to make the battles a bit more strategic than with my previous games, because I didn't want the players to spam-attack through the battles. So using the special skills is highly advised. The energy regenerates, so don't be afraid to use those skills frequently.

zrk03 said:
Ok i played the first bit. Either tho i really really suck at rpgs or this was extremely hard on normal.
Click to expand...

What?!? No way in hell man, the game was even on the easy side sometimes on normal difficulty...trust me.


I admit I'm not really a fan of these materials but you did a very good job with this game, also the whole thing is surprisingly polished (I haven't found any major problems, seriously) but to be 100% sure I have to play it again.

I finished a playthrough with Nail on normal and the difficulty was pretty much bang on (so normal, even on the easy side sometimes as I said), all the battles are pretty balanced, I only had a bit of troubles against Makkon and the Mage Guards (I had to grind till level 7 to deal with them). Needless to say that I liked a lot the music (those gothic-dark medieval themes are awesome), the possibility to play from two different points of view and the conflict between Nail and Elleria, I will play as her now and maybe try an higher difficulty level too.

Dunno why but Nail reminds me about Shepard from Mass Effect (from his appearance)...ahahahah

I don't think you should change much from what I saw, if I spot anything wrong I'll be sure to warn you.

Thanks Dalph. I am pleased to hear you've enjoyed the experience so far. Since I know you like a good challenge most of the time, would you say the normal difficulty is doable for people who are more into the story side of things and less into combat? It is slightly harder than normal difficulty in Incitement 2, but that's because from the feedback I got, many players thought Incitement 2's random battles had too much of an attack-spam, so I was hoping to change that and to make battles more strategic.


Yeah, level 7 is ideal for Makkon boss fight. Just hoping I haven't made it too hard on normal and that the players would quickly figure out to deal with the mages first before fighting Makkon himself since they can cast heal and all that (plus they instantly cure Makkon off poison if at least one of them is still standing when you apply it).

And lol. I haven't thought that Nail looked like Shepard. Haha. I can see the resemblance now though.

Elleria's team has more mages in it, so hopefully that gives a bit of a different gameplay style than Nail's team, who are mostly fighters. And Challenging difficulty mostly adds some new skills to the enemies and ramps up boss stats slightly.

Going to be downloading this today after class and give it a go, I will give you my feedback when I am done! ^_^

Matseb2611 said:
Heya Zrk03. Thanks for trying out the demo. Which part of the game have you played through so far? Is it the first dungeon or the bit after? Also, whose team are you playing as at the moment? Nail's or Elleria's? I did try to make the battles a bit more strategic than with my previous games, because I didn't want the players to spam-attack through the battles. So using the special skills is highly advised. The energy regenerates, so don't be afraid to use those skills frequently.
Click to expand...

My first time i played through i played as Elleria.

zrk03 said:
My first time i played through i played as Elleria.
Click to expand...

Aha, I see. Don't worry too much about the first boss fight (the one against Nail and Anrid). You can still continue even if you lose it (the only thing is you don't get the XP reward, which isn't big anyway). I realised since it was a 2 on 1 fight and right at the start of the game, it wouldn't be fair to give the player a game over if they lost it. Or is it the enemies in the dungeon that are giving you problems?
You must log in or register to reply here.
Share:
Facebook Twitter Reddit Pinterest Tumblr WhatsApp Email Share Link

RCXDan
This profile banner thing is great! Not sure on the size needed, but it's still a nice feature.

Guardinthena
Anyone ever played Chrono Cross? I have been dying to create another micro-biome tileset that is heavily inspired by the Isle of the Damned in that game. So, a Micro Biome Bones edition. Anyone interested in this?
Today at 3:20 AM •••