I am in dire need of a plugin that would be fully compatible with KageDesu's Alpha ABS Plugin (Version 1200).

The context of this plugin involves allowing a character's core 'attack' skill to change based on the type of weapon the actor has equipped. The skill would need to function just like attack, but it could involve different formulas in the damage, and be treated like a magic attack, etc.

Below is the normal 'Attack' all characters are set up with that I have named 'Attack 1'. I have it set to '1' damage in the formula, so it will always deal 1 damage. The target is 1 enemy, hit type is 'physical attack', and the state effect and element of 'normal attack'. 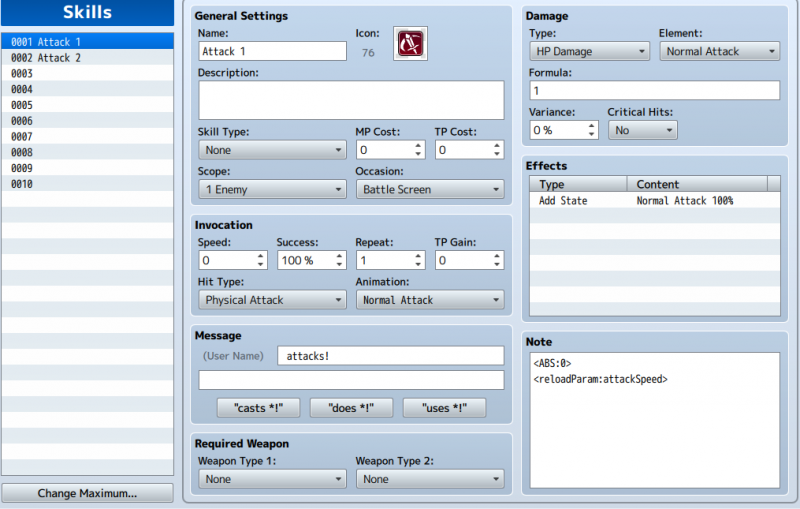 Below is a second 'Attack' skill that I have named 'Attack 2'. I have it set to '2' damage in the formula, so it will always deal 2 damage. The target is 1 enemy, hit type is 'magical attack', and the state effect and element of 'normal attack'. It has the same note that the main ABS Attack uses. 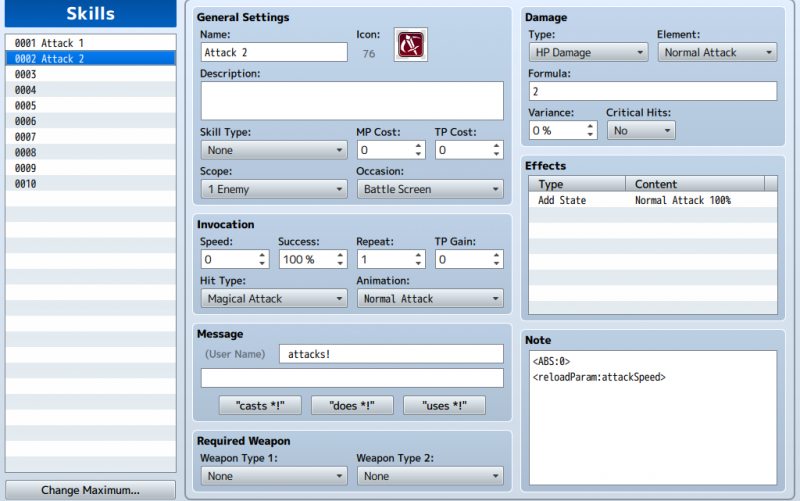 However - the difference with this skill is one factor: How to I actually replace the innate 'Attack 1' within RPG Maker MV with 'Attack 2'? This is where I need a unique plugin made specialized for ABS.

As an important side note - I have attempted to apply Yanfly's Weapon Unleash to accomplish this goal, but it has failed to be compatible on all instances I have attempted with ABS. So now, I am asking for help to have a similar plugin developed that would be more acquainted / friendly to the ABS plugin since Yanfly's weapon unleash won't work. Or, if somebody knows the scripting well for Yanfly and ABS verson 1200, the scripting could be edited possibly to make this work as well? I have made a previous thread about this mentioning the bug report I receive: https://forums.rpgmakerweb.com/inde...nd-yanflys-weaponunleash.130511/#post-1142206