So, I've got my evented battle system in the game, but now it just won't start at all. It's acting as though there's an autorun event when every event in the game is parallel process or action button.

Here's where it gets called. 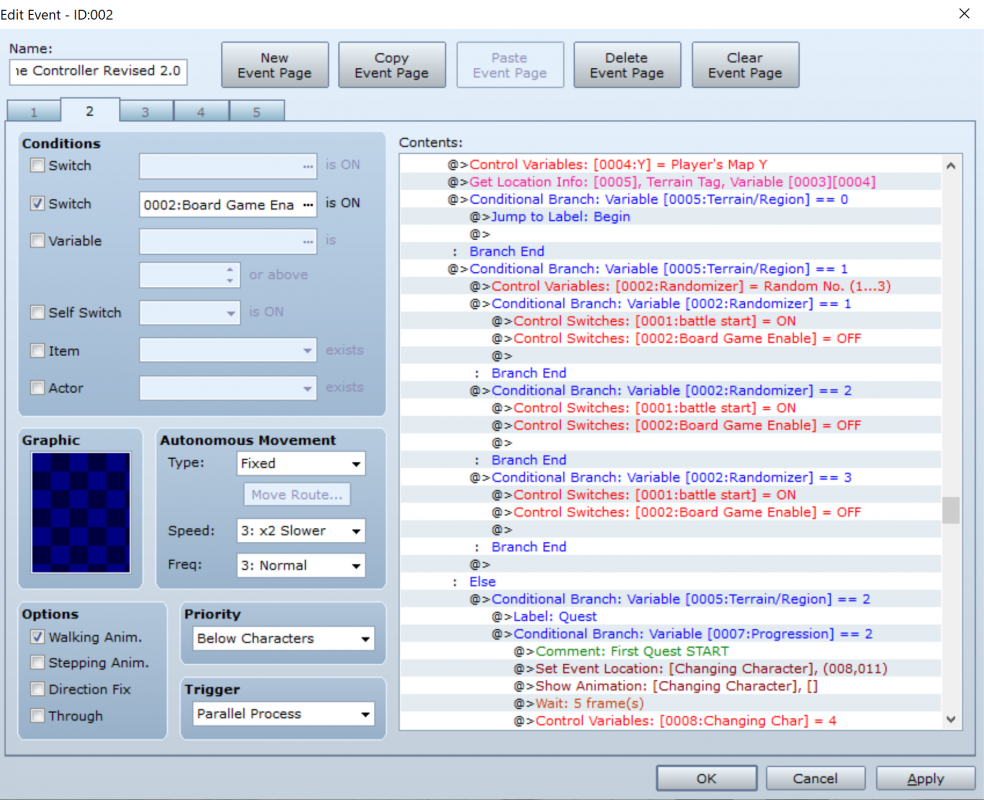 And here's the first page of the battle system. 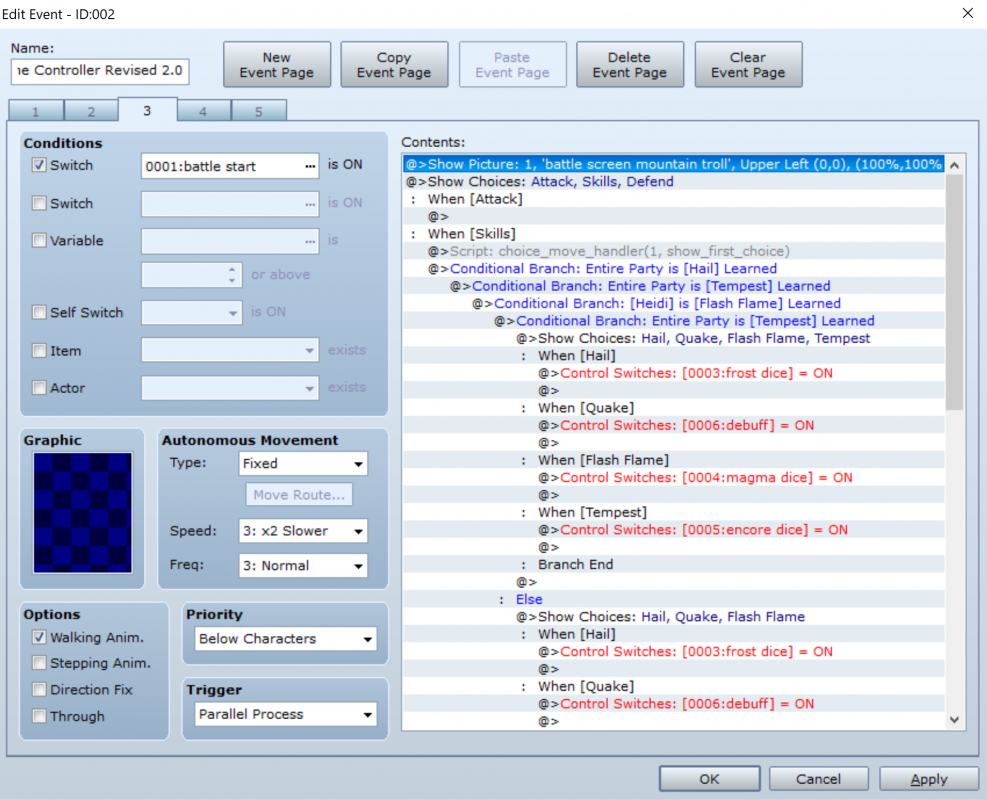 Here are the things I've tried.

1. I tried to move the battle system logic to the event with the main board game mechanic. The same thing happens. It just freezes the whole game.
2. I put a debugging text box on every page. None of the text boxes show up, which leads me to believe that it's not seeing any page at all.
3. I set each page to parallel process instead of autorun. It still freezes, which baffles me. I can't even turn.

It just seems to be fabricating an autorun page and I can't wrap my head around it. If you need me to post a video of what it's doing or even post the game itself, just let me know.

no common events set to autorun? Not even ones with no commands?

Can you get into the debug menu and see what those switches are set to? Can you move around?

No common events at all. Just double checked.

So, I dun goofed and forgot to add a page. (That wasn't the problem, though) 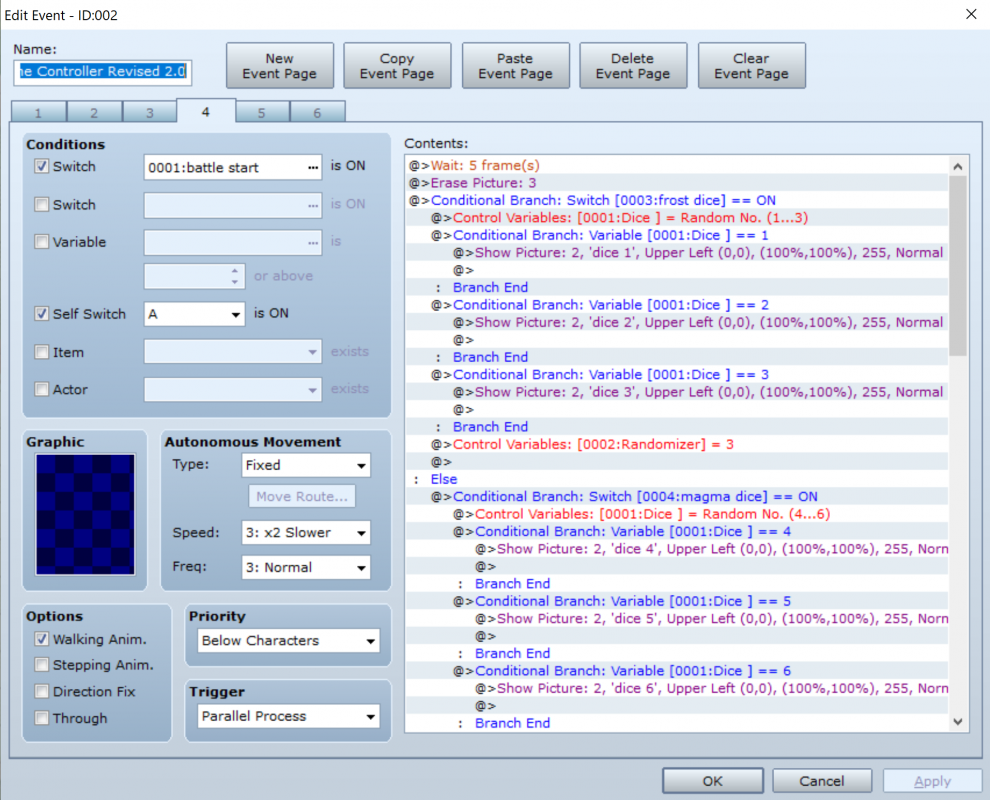 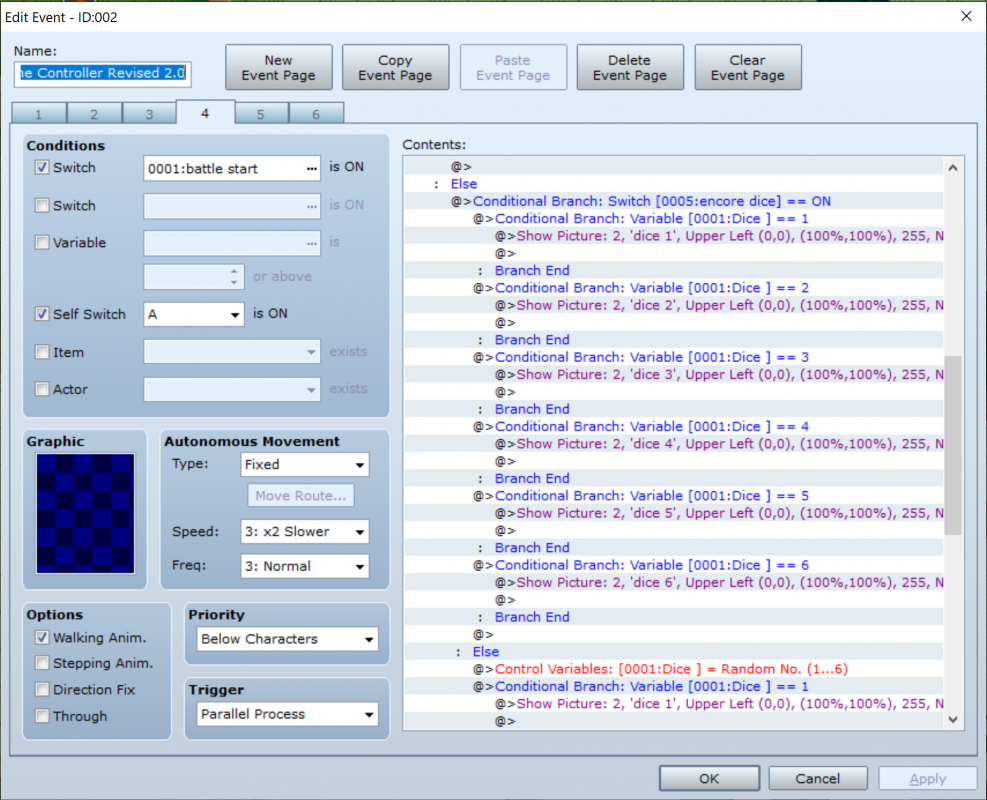 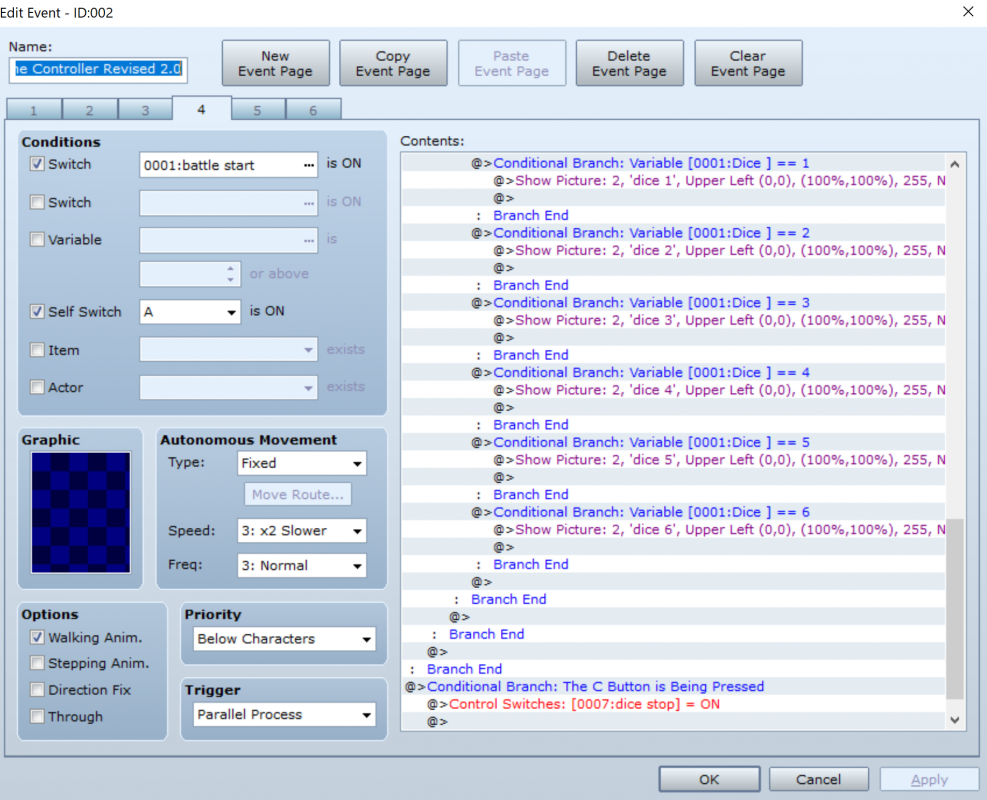 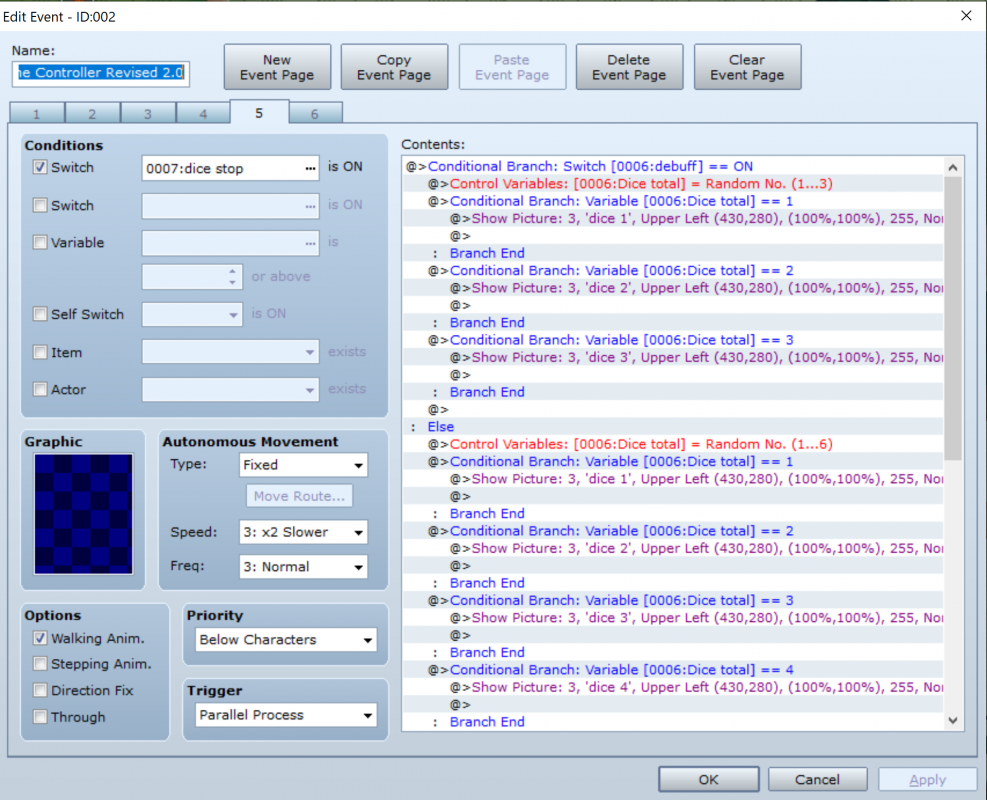 The bottom is just some variable math for calculating damage. 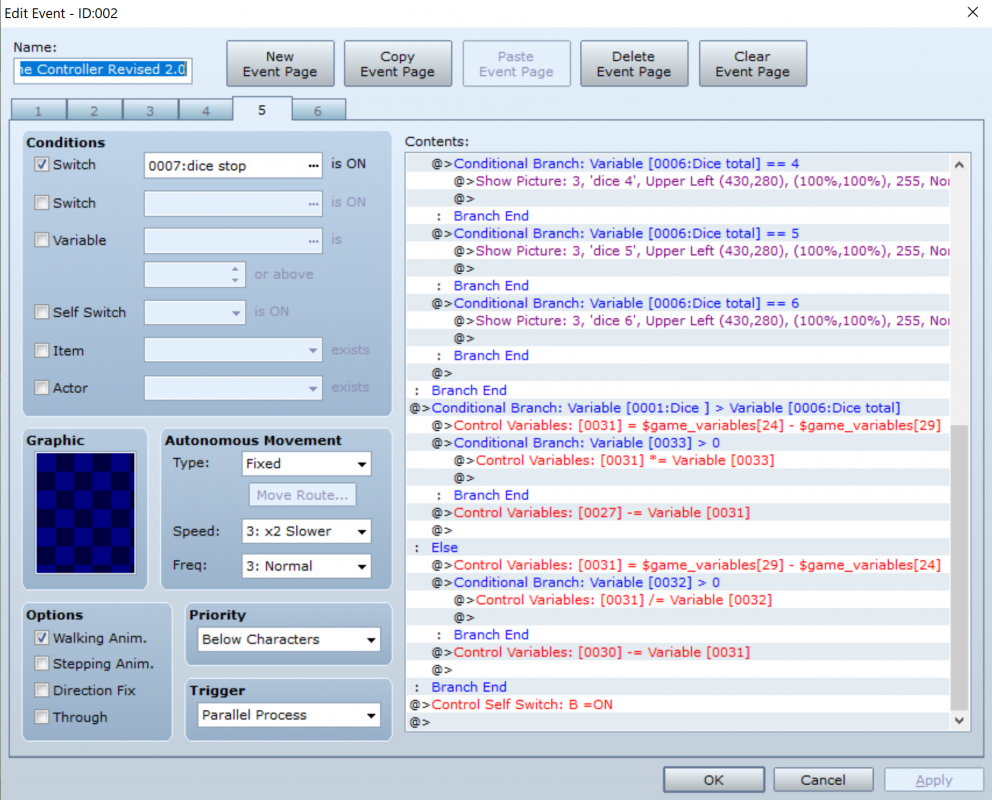 This page just resets everything after a turn ends. 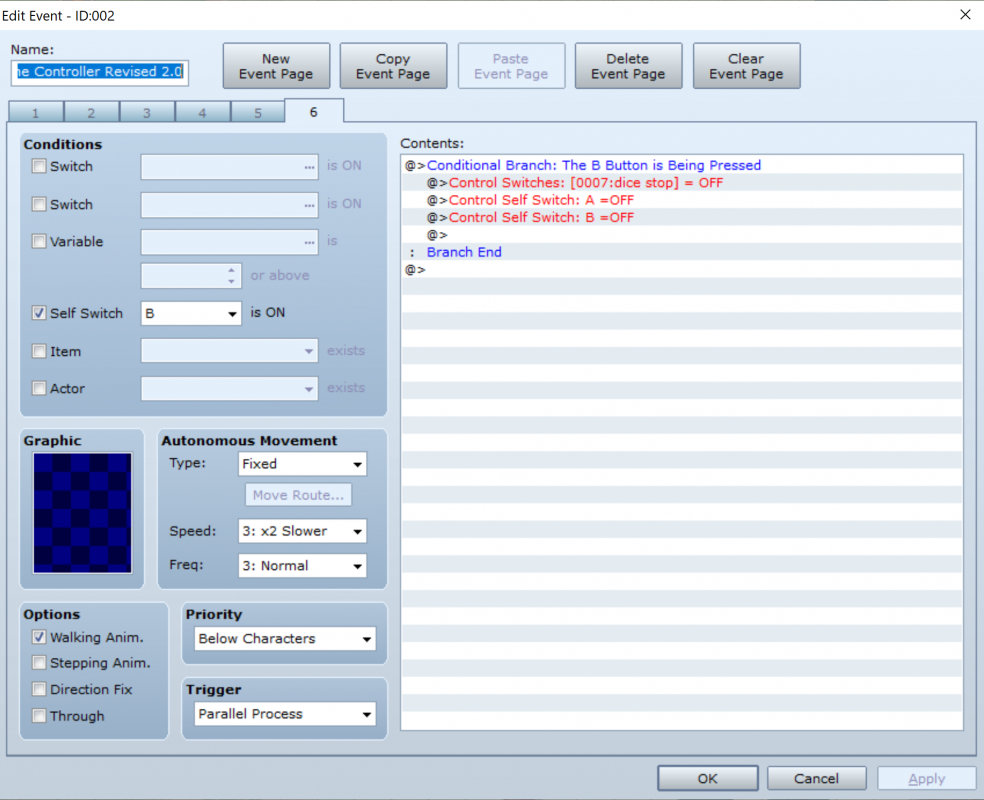 Can't do anything. The game is completely frozen. No debug menu, no movement, nothing.

Well nothing looks wrong yet. Your page two is quite long and We don't know what's on page one.
wouldn't it be easier to make a dummy project and copy that one event into it for us to look at?

If you can't access the menu, debug, and can't move, then there's got to be an autorun event somewhere, a plugin that's causing the game to freeze, or your event is putting you into an infinite loop.

I suggest you add some Show Text commands to your event so you can see if that page is actually active and being run. If it is, move them around a bit to figure out what is running and what isn't.

Roninator2 said:
wouldn't it be easier to make a dummy project and copy that one event into it for us to look at?
Click to expand...

I actually just tried to do that. The problem is because the whole board game logic is in there, I'd have to set up terrain tags and region IDs according to where the player is supposed to be moving. As of right now, the terrain tag is set up, but there are no regions because there's no board. So the player just doesn't move and I can't tell if the game is freezing because of the battle system or because there's supposed to be movement.


Shaz said:
I suggest you add some Show Text commands to your event so you can see if that page is actually active and being run. If it is, move them around a bit to figure out what is running and what isn't.
Click to expand...

OK, so something interesting just happened. I added Show Text commands where the battle system gets called, and it worked. But the minute I take away the Show Text command, it freezes again. I'm going to see if I can take away some scripts and see if that's causing it.

EDIT: OK, so that's a no. I took out every script one by one and it still freezes. There's gotta be some pesky autorun event somewhere that I'm not aware of.
Last edited: Jun 17, 2021

Unfortunately I don't think I made a Dude, Where's my Autorun? for VX Ace. XD

rvdata2 files are a bit less convenient than json data as well...not quite sure how you'd figure this one out.

When you say it works with a show text, do you mean that after you hit enter to close the text box the rest of the system continues as it should?

HexMozart88 said:
It's acting as though there's an autorun event
Click to expand...

what exactly is it acting like?
It doesn't help to compare it to something that you already checked, because what it really does might give us pointers to what else has a similar effect.


HexMozart88 said:
2. I put a debugging text box on every page. None of the text boxes show up, which leads me to believe that it's not seeing any page at all.
Click to expand...

a better idea is not to use show text, but give each page a different sprite - fountain for the first page, crystal for the second and so on.
that way you can see on screen which page is active (or none if no sprite appears) without the need to run any command on the page.


HexMozart88 said:
I set each page to parallel process instead of autorun. It still freezes,
Click to expand...

as said, autorun is not the only thing that can freeze the game.
it could also be a blocked moveroute that is not allowed to skip, a loop that has no exit (especially inside a parallel process) and a few other options

OK. I think I figured it out. It was staying on page 2 despite me trying to move control to a different page. What I had to do was put a Jump to Label command so that it would stop checking the tile constantly. What I think happened is that the conditional branch was always true so it kept generating a random number so that it turned on the switches, but never went to the next page because it was stuck in that conditional branch. I THINK everything works now, but I'm hesitant to have the thread closed in case I find something else, LOL.
You must log in or register to reply here.
Share:
Facebook Twitter Reddit Pinterest Tumblr WhatsApp Email Share Link

Now, my devious machinations can finally be born...
53 minutes ago •••