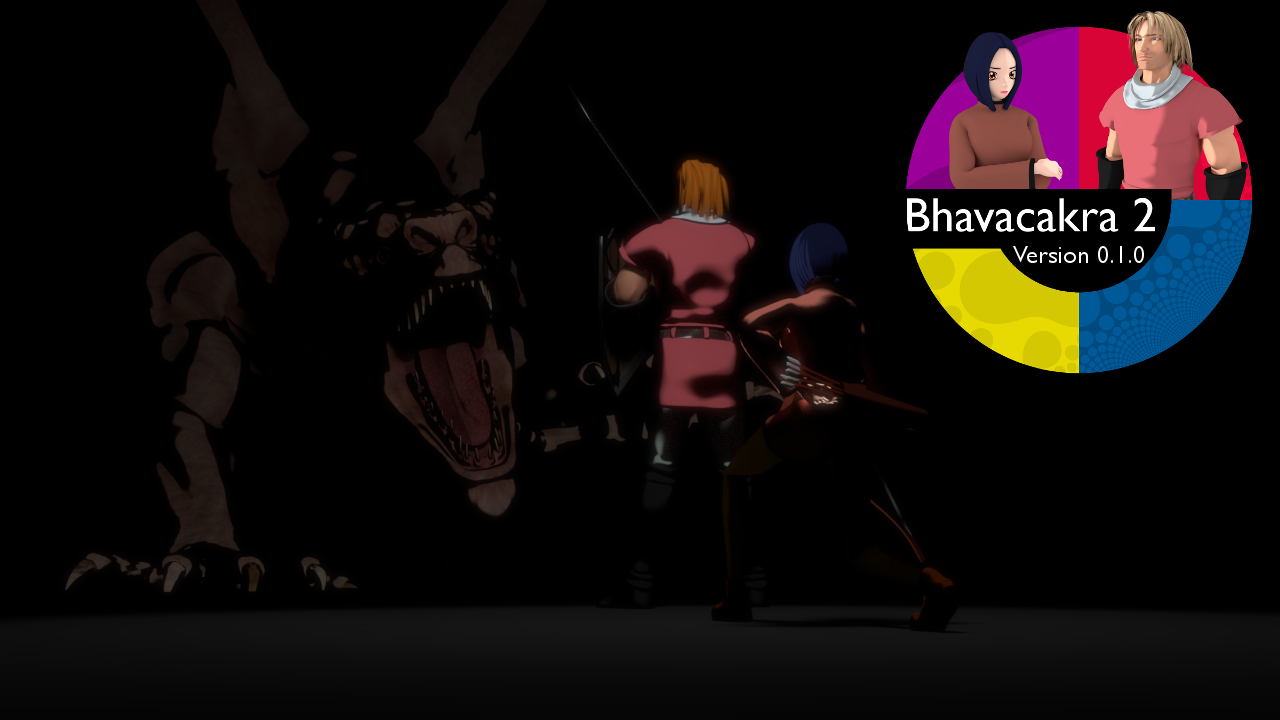 Juan, Sue, and Decon stopped the last genesis war and saved the mankind from total annihilation.

But those aren’t the worst news. Lizardman tribes rise from underground and dragons are rumored to be seen flying around. And monsters they had never seen before are hanging about.

Their once peaceful era is no more. They now have to fight for survival.

Now married to Juan, she has settled down in post apocalyptic Ezona. Being one of few who are capable of hard combat, Jack tasks her with the ultimate quest of ensuring survival of remnant survivors.

Sue's husband. Young but battered beyond full recovery, he has now retired to combat, spending his days at his home most of time.

A old veteran who is originally from Leona's guild. With Leona fallen too ill, he now works for Jack. Like Sue, he is one of few who is a capable fighter. Therefore, Jack asks him to join Sue for the ultimate quest of saving mankind.

He is not very talkative.

P.S. He is the only character who can be played in all three Bhavackara series.

Being a fine doctor, Sue asks her to heal Juan.

He may have retired from combat, but he is still a smartass. He was the mastermind behind preserving Ezona from total destruction and is now tasked to ensure survival of human race.

He is Jack's strategist and he was the one responsible for making Jack a king for a brief period before the hell broke loose.

He is an extremely talented fire mage and is also the last defense of Ezona. Therefore, he is unable to assist Sue and Co. 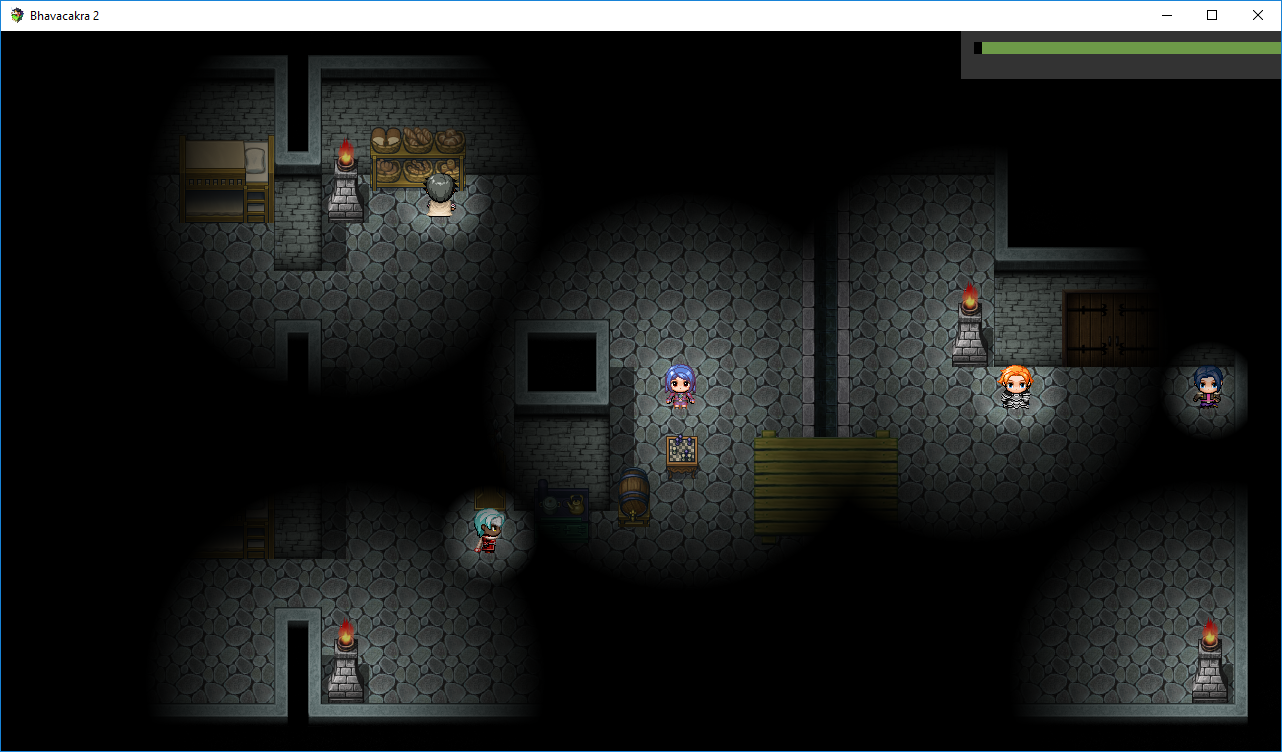 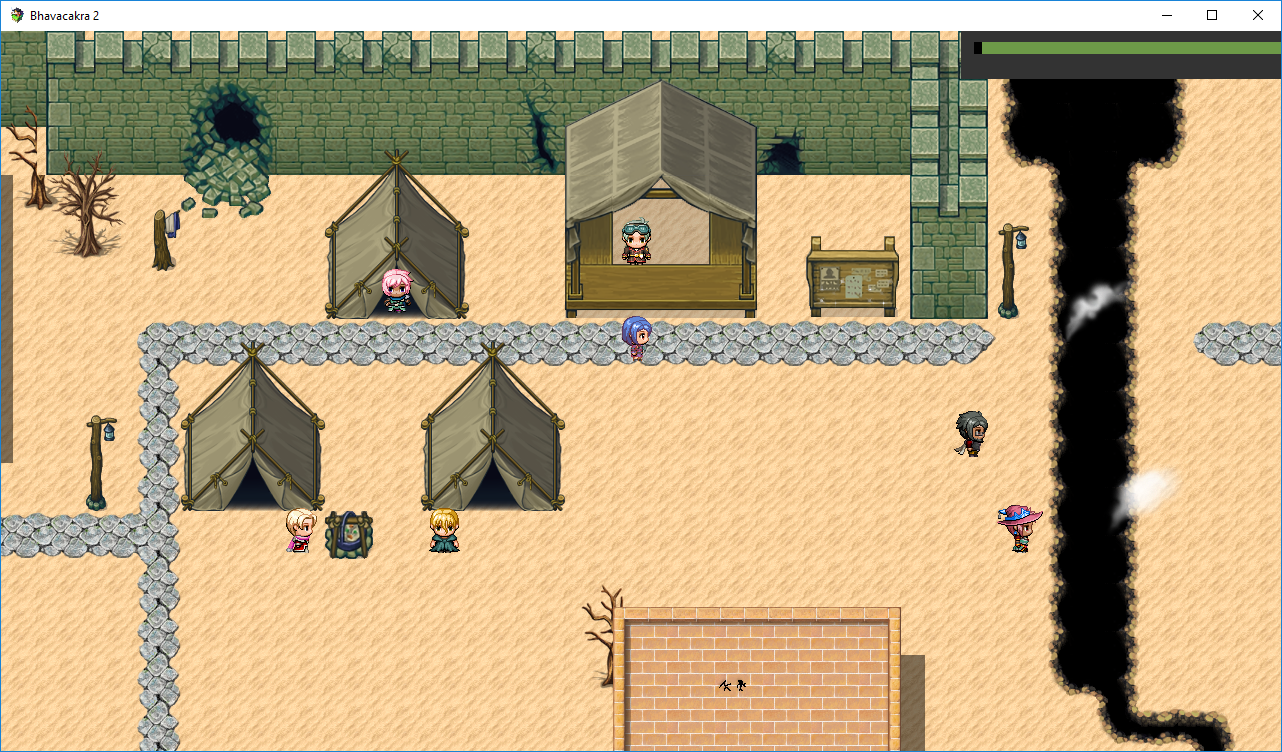 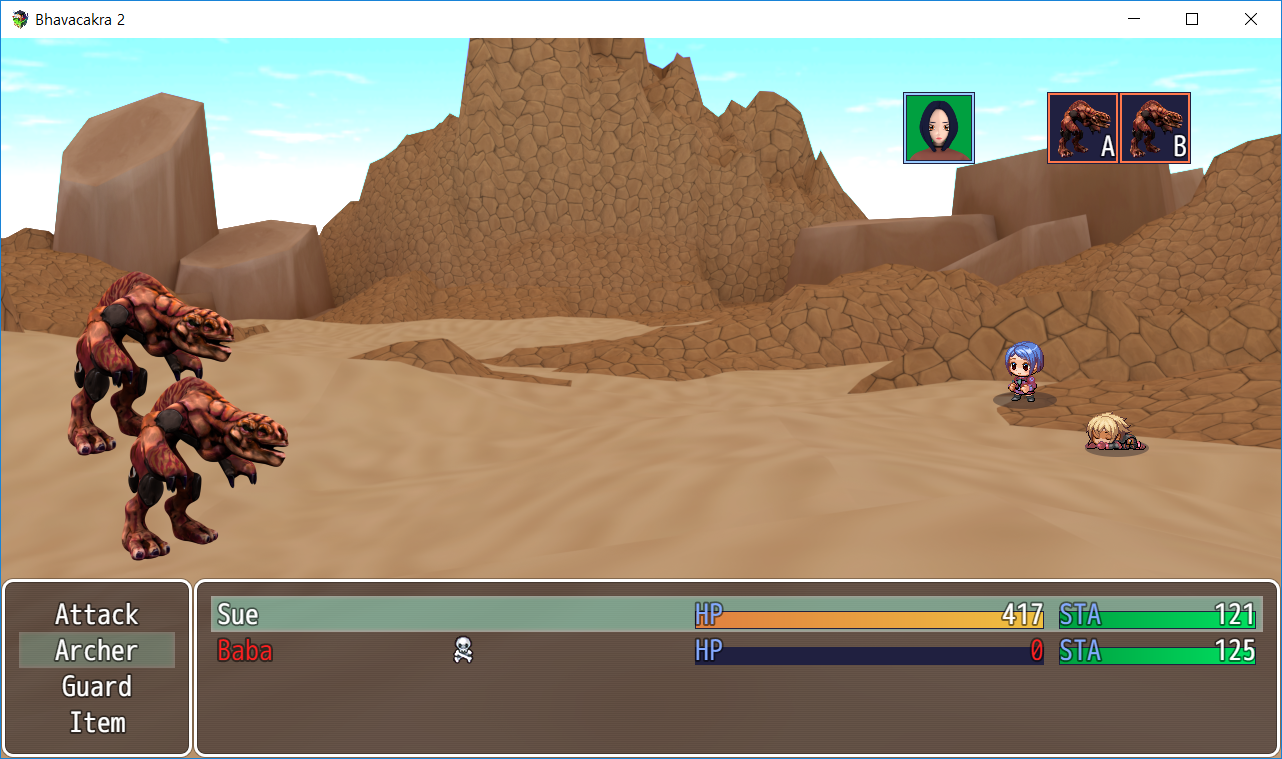 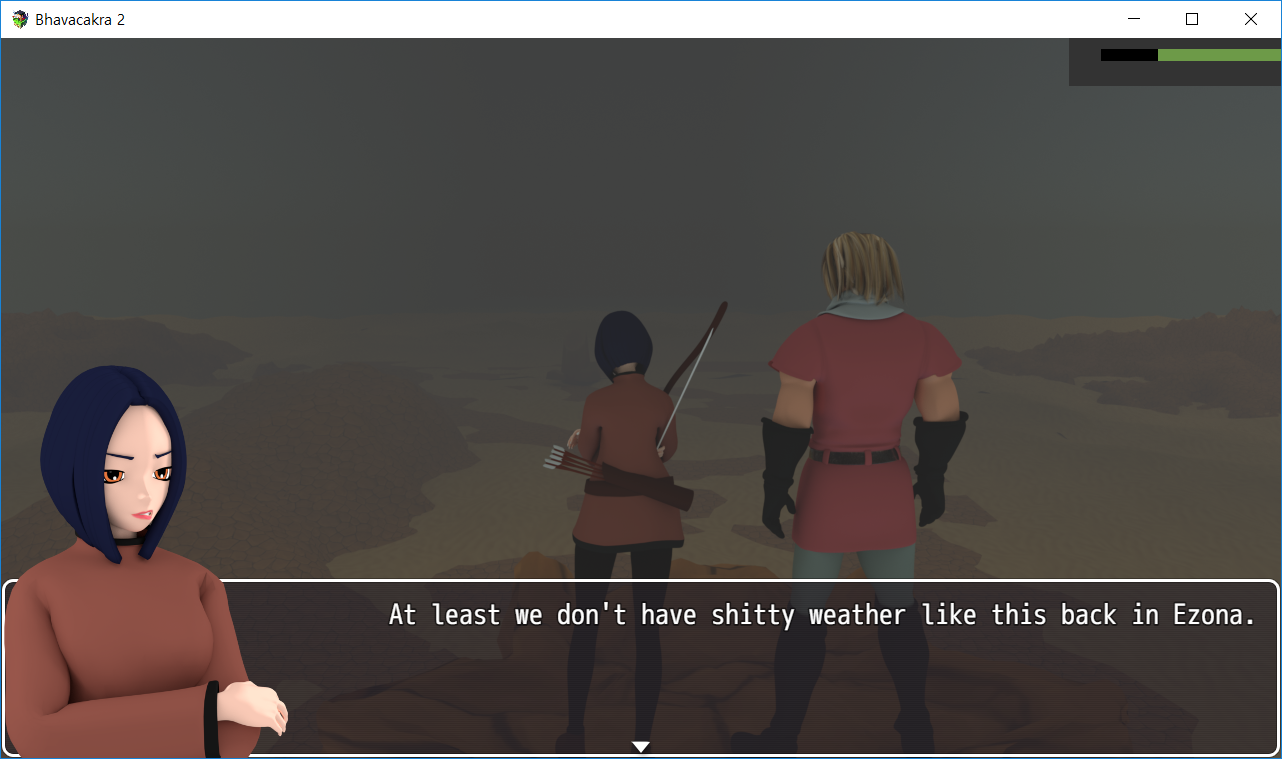 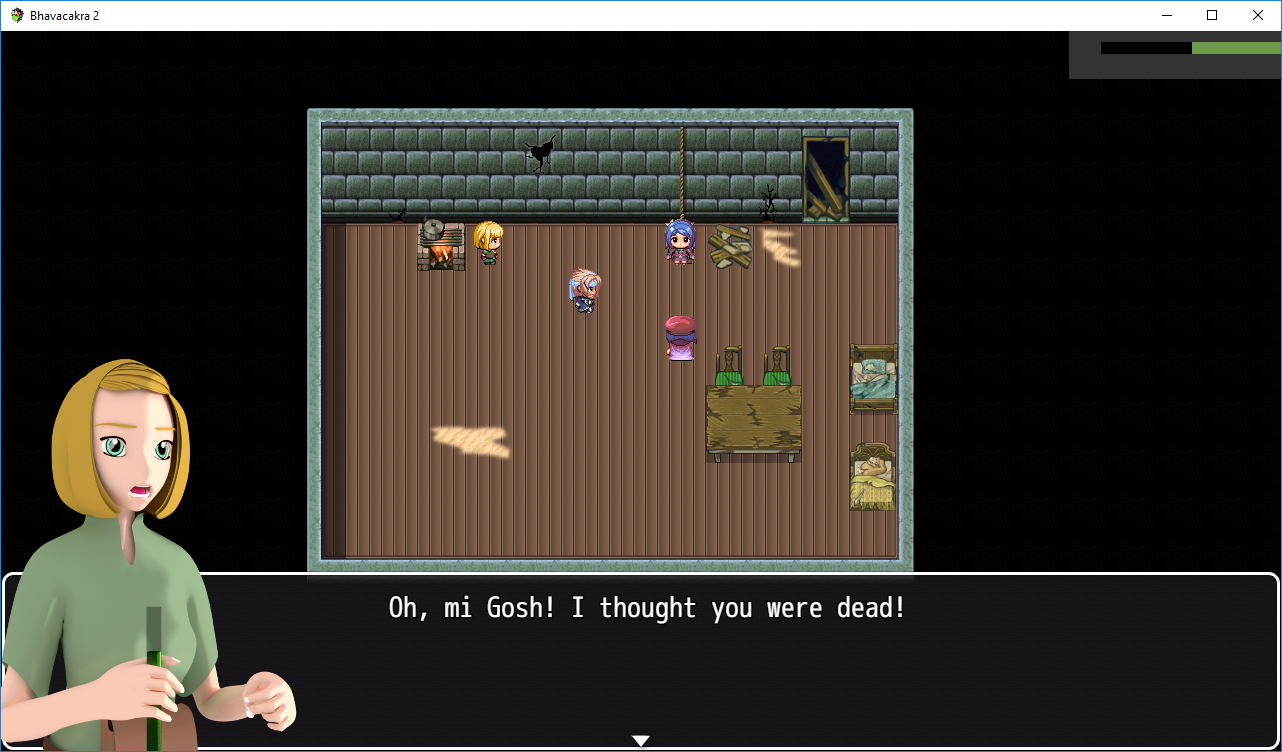 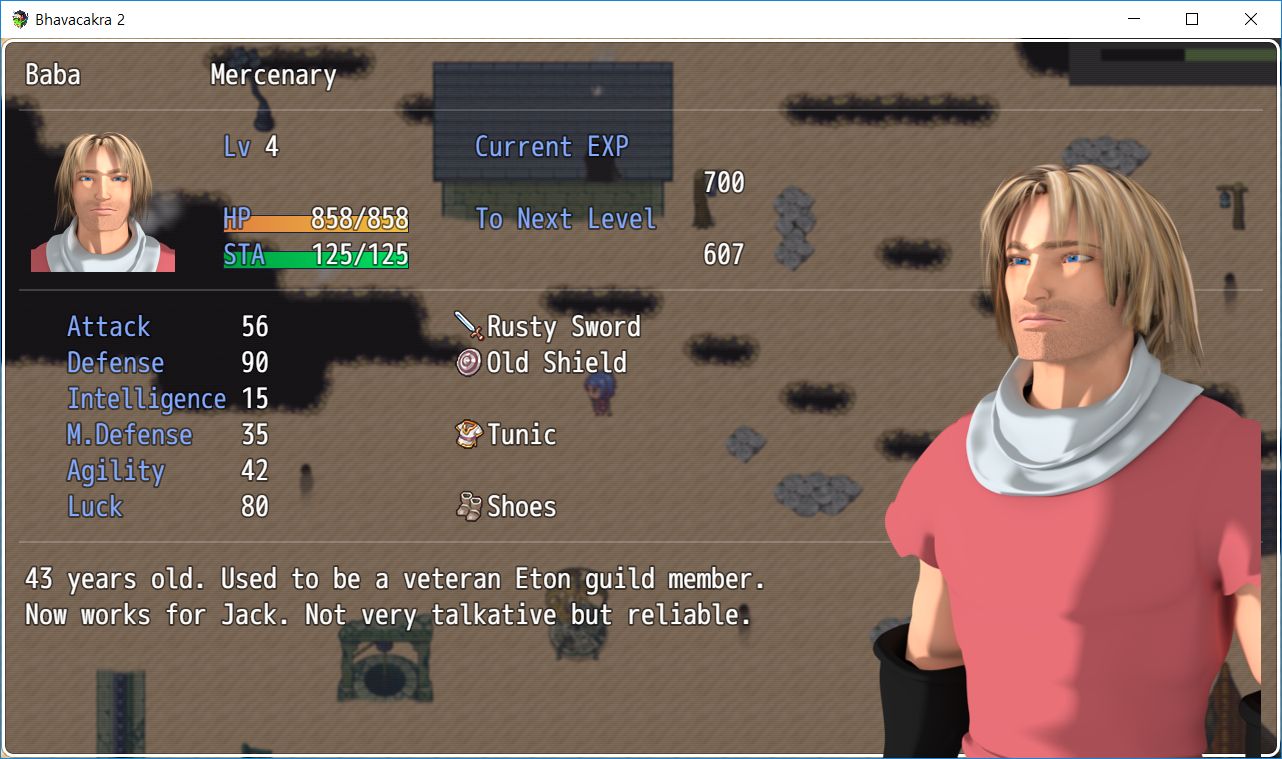 The art style clashes waaayyy too much for my liking. Nothing looks coherent or unified in the slightest, you've got RTP-style sprites with realistically-proportioned 3D, and even within those elements there are clashing styles where the men use RTP faces yet their 3D busts have realistic facial features, while all females both in sprite and 3D form have sparkly anime eyes. If you're dedicated to this aesthetic that's your choice, but it does nothing for me and makes the game look much worse than it has the potential to be.

onipunk said:
The art style clashes waaayyy too much for my liking. Nothing looks coherent or unified in the slightest, you've got RTP-style sprites with realistically-proportioned 3D, and even within those elements there are clashing styles where the men use RTP faces yet their 3D busts have realistic facial features, while all females both in sprite and 3D form have sparkly anime eyes. If you're dedicated to this aesthetic that's your choice, but it does nothing for me and makes the game look much worse than it has the potential to be.
Click to expand...

First of all, thanks for taking your time to make a comment.

Unfortunately, yes, this is the style I have to go with. Since I do it by myself, I have to draw a line.
I did, for a while, consider using taller sprite for better proportioned feel and I could do it with main characters, but not for all other NPCs. Time required for such was beyond my means since I'd have to do it for around 100 NPCs total. (Actually, around 300 NPCs)

I tried to play the demo, but I ended up unable to continue because Jack repeated his dialogue when I went to talk to him a second time and then Sue refused to leave the house without talking to Baba, even though he was already in my party.

Okay, I'll go ahead and get my thoughts on the different graphic styles out of the way in this paragraph, if you've already decided that you won't change anything then go ahead and skip this. I agree with onipunk, there are major clashes with the different graphics you've chosen. Personally I'm not a fan of 3D-ish busts because I just think they tend to be too uncanny valley for me, but my biggest issue with your busts is that they aren't a consistent style. You have some that are anime-inspired and then some that are supposed to be realistic but even the realistic ones' styles look different depending on the character, and in the end it just looks like you went and found a bunch of images online and decided to use them (I'm sure that's not what you did, but it's what it looks like to me). Please choose a style and stick with it for everyone, I understand that it's more work but it would make things look so much better and more cohesive. The inconsistent styles also affects your maps. I'm fine with MV's tiles, but you have a bunch of different tile styles (some a blurry because of resizing, some are pixel art) and it makes the maps look thrown together. Finding all the resources you need for mapping is difficult, but try to stick to one type of tiles (and maybe be ready to give up on some tiles if you can't get it in a matching style). Even the battles look weird because the enemies have realistic models but the party has extra anime-inspired sprites. Modeling the party characters in the same way could make them fit a lot better in the battle screen). I know that getting all the graphics together is a lot of work, but it's really worth it to give potential players a good first impression of your game.

All right, onto comments for the actual game! I haven't played the other games in this series, but the beginning of this game seemed to talk a lot about how terrible things currently are. I would've preferred if you had shown me some maps of the damages, instead of just mentioning it through dialogue since words don't always have the emotional impact that images do. It seemed like you tried to inform new players of what had happened in the previous games, which is appreciated but at the moment it was kind of stilted, like when Sue spoke in parenthesis about Decon's legs being broken. Instead, maybe try to find ways to work it into the conversations naturally.

The battles left a lot to be desired. It may be just that I'm unlucky, but the battles seemed really unbalanced. The first fight I was in was against a giant blob and two tarantulas, and they wiped me out right away. Later I fought just one tarantula, and it still killed Sue before Baba could beat it. When the enemy could do 250 points of damage while I could only manage around 45 a turn, it makes me want to just run from all battles. There was also some issues with the skills. Sue had a skill called Dark, but she couldn't use it since it required 50 stamina and she only had 40 possible. Baba had a skill called Swing, but I had no idea what it actually did since all its description said was 'Swingin'... I gave it a try, but since it only did like 20 points more than the normal attack I figured that it wasn't worth the cost.

The mapping could use some work. The interiors are all really large and empty, I think most of them could be shrunk a bit and you'd still be able to fit everything you wanted into them. I found it odd that Sue and Juan are married but sleep in completely separate rooms. There were some passability errors, such as being able to walk onto the standing mirror in Sue's room and being able to walk onto part of the green wall in Ezona when the sand is against it. It seemed like all the ground tiles in Ezona were set to be 'bushes' since Sue looked like she was sinking into the stone paths. Also, one of the trees near Jack's house is missing a big chunk out of its branches.

All of the dialogue could use some proofreading. I know English isn't your first language, but there were a lost of spelling errors and issues with sentences that should be fixed. I eventually stopped keeping track, but here are some of the ones I noticed:
Since I ran into that bug that kept me from continuing the game, I can't say if things get better but from what I saw I think the game could use more work.

hiddenone said:
I tried to play the demo, but I ended up unable to continue because Jack repeated his dialogue when I went to talk to him a second time and then Sue refused to leave the house without talking to Baba, even though he was already in my party.
Click to expand...

HexMozart88
I always have a hard time writing mean characters. To me, their words sound like a normal comment I receive on a regular basis, but to others it's too much.
50 minutes ago ••• 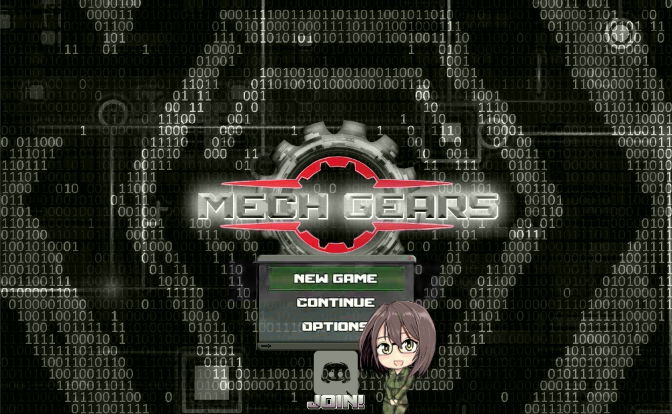