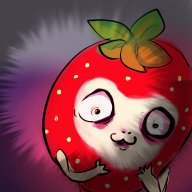 Yo fellas! I'm writing the story of mha protagonists, in hopes for some inspiration to make their skills in game. ((But mostly it's just for story ahaha~))

I need some writing advice — or rather,
criticism, to keep my gear going.
Because I'm an only child, I can barely attach myself to real life examples of how siblings interact on a personal level. I only think of the "good" things like sharing a meal, crying together, playing together.

But I know that their key conflicts are lacking. The relatable sibling rivalry with jealousy, hate, calling out on one another? Completely absent.

Since it's been bogging my head, I managed to write this base.


Big brother dude is well around 18 cycles, and he lost his entire family during a war. While he surely can fend for himself, he became pretty introverted and aloof because of it, with all sorts of gloomy perception towards life.

But he then traveled to a shelter, and met with these two children who don't have any parents. Basically they became such close friends that their bond is inseparable. A "they need me, I need them" kind of mutualism.

I'm determined to make my protag adopt them as his siblings in a sense, so he can finally obtain a new purpose in life.
These sisters are 8 cycles old, born 3 days apart from each other. No one knows where they're from, and they must face emotional neglect at the shelter they live in— other students would check up on them for food or give toys, but nobody's holding their personal custody. They have trouble fitting in with the other children and misbehave a lot. It's more of a comical effect than a sad story, though.

Because of it, the older one (Ally) is a sensitive little mutt that has a short fuse, can't communicate well, and tries to force people to give what she wants.

The younger one (Olly) is a dense kid who's pretty good at breaking the ice, but snitches on people she doesn't like because she has trouble dealing with empathy and feels lonely all the time. She has a hard time deciding her true colors.

After the sisters and Big Bro met, Ally becomes attached and jealous around him, while Olly is trying to get Ally's attention back.
So they're not really human. Their species are much more skillful compared to humans. (Think of them cliche genius/crazy talented kids.) They can be really smart beyond their years, (1 cycle = 3 years) but they really lack emotional intelligence, so they'll still act out their cycle age.

I've made the humans pretty much um, hate this species and want to hunt them down, to ensure the safety of mankind. The whole war, in fact, is because of the hunt between them (plus adding on top of like, actual World War.) That's why this "shelter" exists.
So, children like them can actually manage from being given basic necessities, but how will they raise themselves without a real parental figure?

Then, how deep is the patience and reasoning of a big brother, compared to an actual parent? How would he overcome his own needs and emotions to care for these children?

Also, how should I develop the sisters to become their own unique persons? All I did was make them either similar or opposite to each other.

I don't know your world lore and setting so I can't comment on the general feel and the bonds and feelings that come with it. But I can try to answer some of your question (I have a little brother).


marsatche said:
So, children like them can actually manage from being given basic necessities, but how will they raise themselves without a real parental figure?
Click to expand...

Again, it depends on your setting. Is it a drama/psychological game? Comedy? Action? Post apocalyptic world? Medieval? The setting can greatly influence the answer to that question. If you're aiming at the serious/drama feeling, then they probably had to learn to survive and wouldn't be really cheerful or in a playing mood.

Then, how deep is the patience and reasoning of a big brother, compared to an actual parent? How would he overcome his own needs and emotions to care for these children?
Click to expand...

Depends on the person, and even the culture. I grew up in a pretty Asian family (South China & Vietnamese, country people, not city) and in our culture the eldest child is that looks out for the younger siblings. We are generally more patient than the parents. So if a younger sibling screws something up, the mother might get mad, but the older brother will try to reason with the mom to protect the younger sibling. Stuff like that.

Also, how should I develop the sisters to become their own unique persons? All I did was make them either similar or opposite to each other.
Click to expand...

There's nothing wrong in giving them opposite personalities, since that will create a clear contrast between them. Just remember to develop them as individual characters and not as a pair.

I am dealing with this question as well in my post-apocalyptic game, but it's an older brother and younger sister, who are both young adults. I have a brother, but no sisters, so I really have no idea how a sister would act like in reality.

The brother has taken care of them both since their parents died, and is overprotective of his sister as a result. He is jaded and cynical because of the world they live in, and doesn't have much faith in other people. He tries to be a replacement for their parents, but ends up stifling his sister by not allowing her out of their small town.
The sister is much more optimistic than he is, and is generally a much better person.
You must log in or register to reply here.
Share:
Facebook Twitter Reddit Pinterest Tumblr WhatsApp Email Share Link

zerobeat032
just hopped into project recruitment... hoping to maybe find some artists to help with parallax maps and whatnot. I could do them myself, but I'm not really good at it so I'd prefer to stick to my strengths which is character art and SOME UI elements.
31 minutes ago •••

Conflictx3
PRODUCTIVE DAY! I think I FINALLY completed all the items for part 1 of Fallen Feather, that includes the animations, the stats, the pricing, etc. for weapons, armors, key and consumables! all i need to be 100% done is write a few more descriptions (only 10 left out of the 40+ items) and to find some nice pants icons (dont ask lol).
44 minutes ago •••