The problem has not been solved!

The black lines still there on the android deployment. I just found a way to not have to deal with the problem. Using the parallax map on all the maps I make for android will take me a long time plus it will not have the same facility as in the editor to remove something from the map, a table, a tree or some other tileset that I want to use as event or not. To make this editable on parallax map, I myself have to do the layers in third-party programs like GIMP. For example: Create the map floor, save and place in GIMP as layer 1.
Create objects, houses etc. Save and put in gimp as layer 2. And in succession.

In addition, using parallaxes map in android consumes a lot of space in the project and impairs the performance in mobiles, since each parallax is an image and not the tilesets that are lighter.
In short: My problem has not been solved. I am writing this again because when I emailed technical support to my question, (with a brief of the problem and a link to this post) they replied that they
"were happy that my problem had been solved"
IT WAS NOT SOLVED.
___________________________________________
"""SOLUTION""" > Not exactly a solution, but a way to get around the problem. Make the map normally in Maker and take a screenshot and add it as parallax.

I updated the post in an attempt to better explain / detail the problem and the attempts already tried so far to solve it.

Problem> Black / white / blue lines are appearing on the screen after deployment to android. 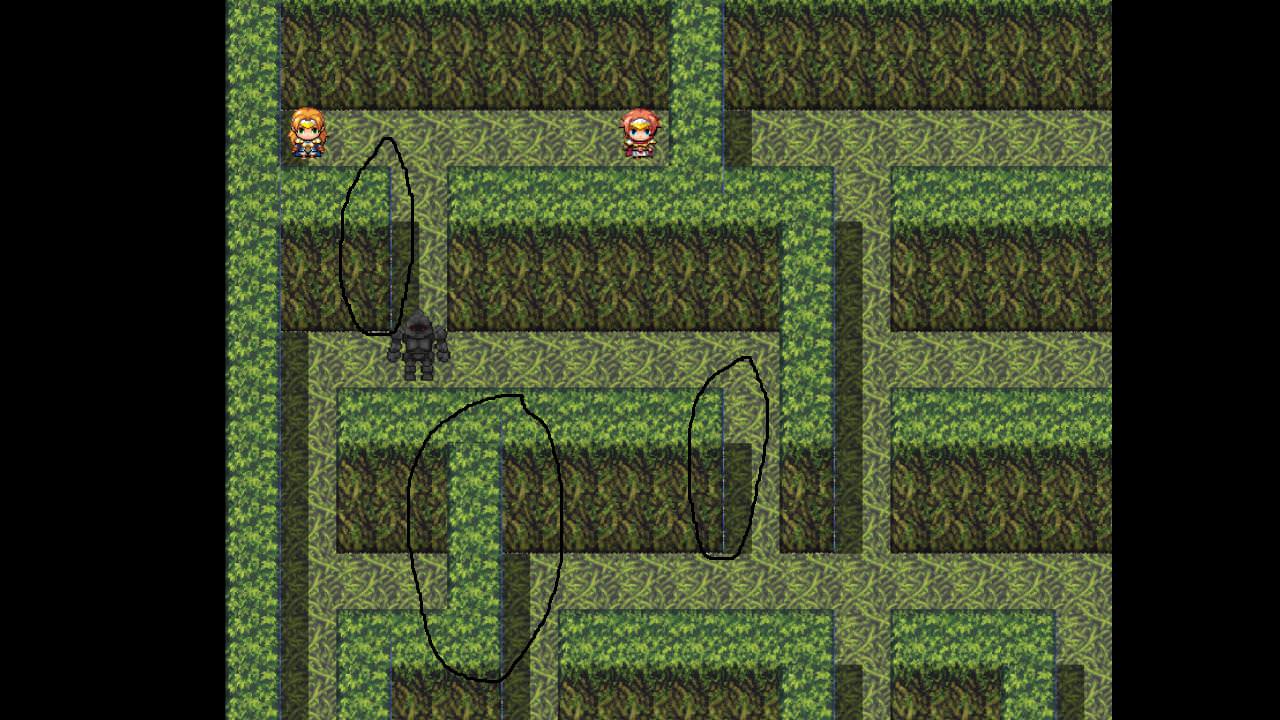 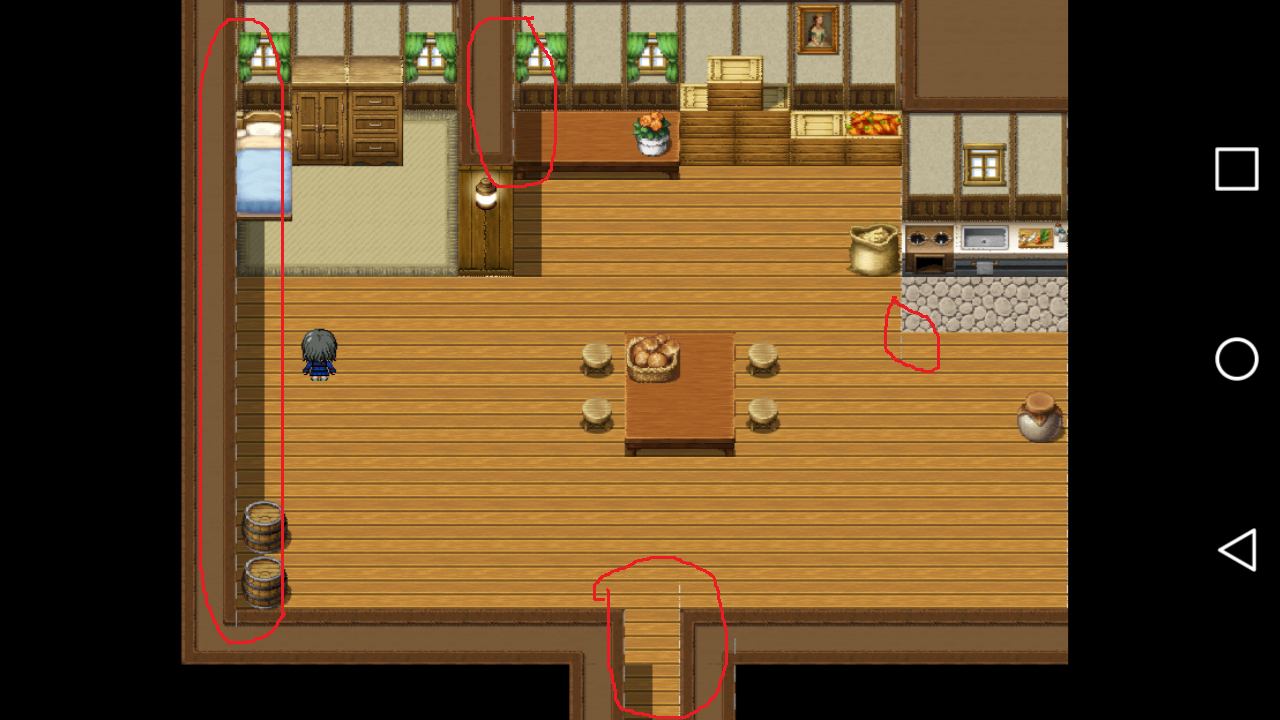 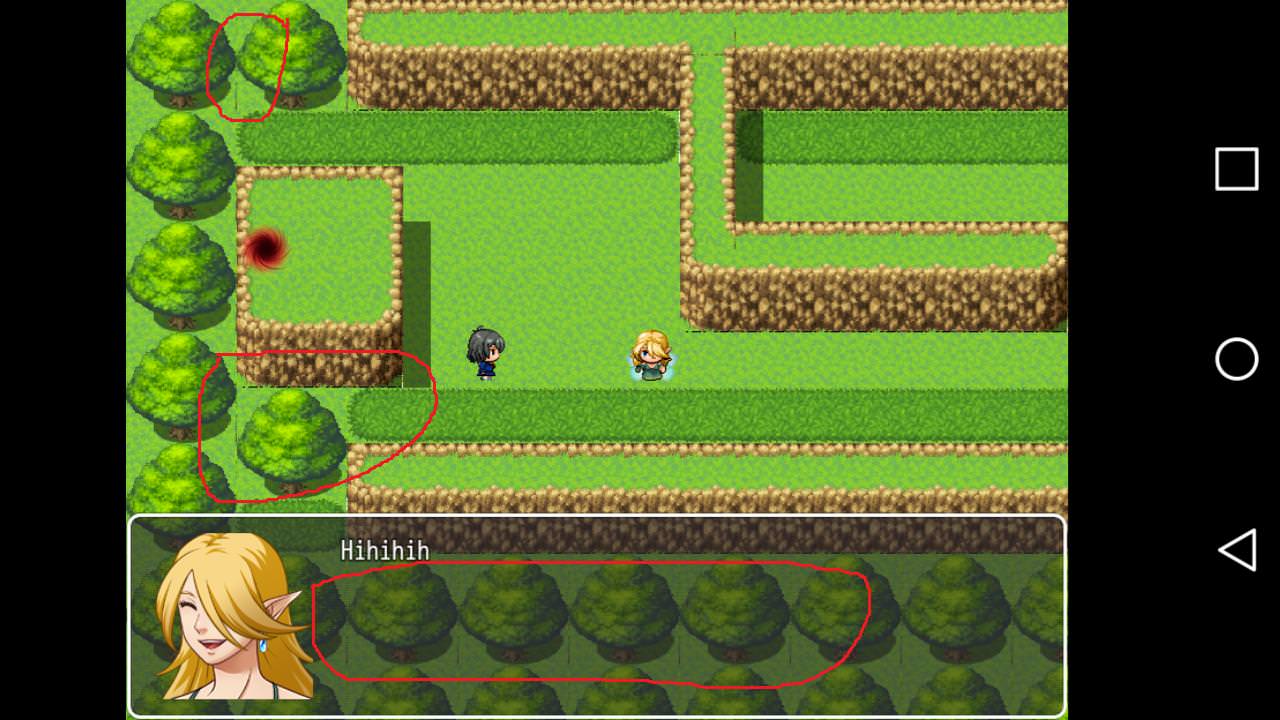 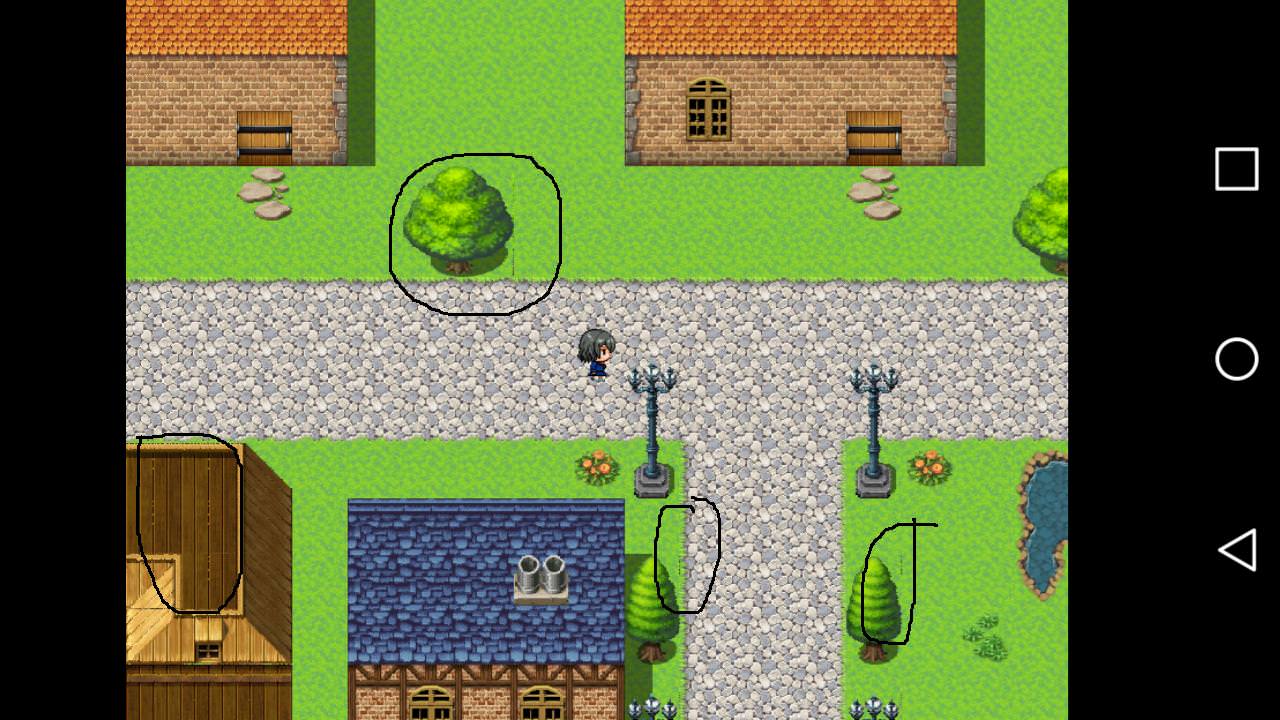 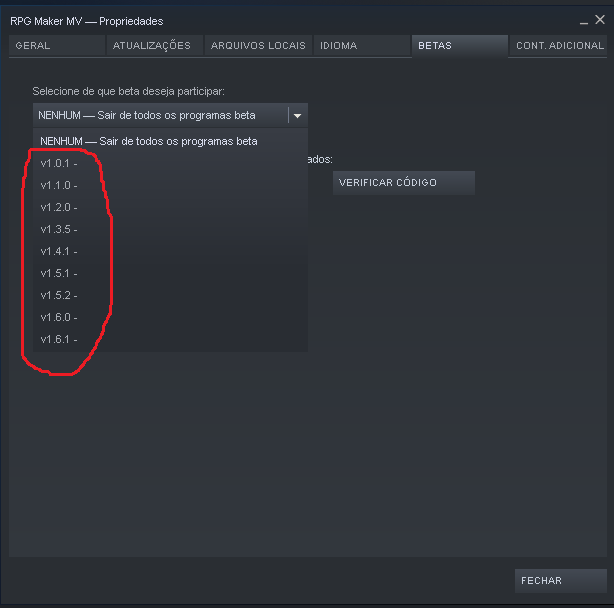 I created new projects in each of the versions, and I used the way to generate the APK with the three forms of export listed in the "information", all the apks that were possible to generate, remained with the lines black / white / blue.

There was a case of a person with the same problem in this topic https://forums.rpgmakerweb.com/index.php?threads/thin-black-white-line-on-map.81510/ And managed to solve it as follows: Change the .js files from version 1.34 to the folder of the project (with the exception of the plugins.js file) and managed to resolve. However, STEAM does not give me the possibility to downgrade to this version.

I found on the Yanfly site an information saying that in the update to 1.3.1 the problem of the black lines in the android was solved.
http://yanfly.moe/category/rpg-maker-channel/ 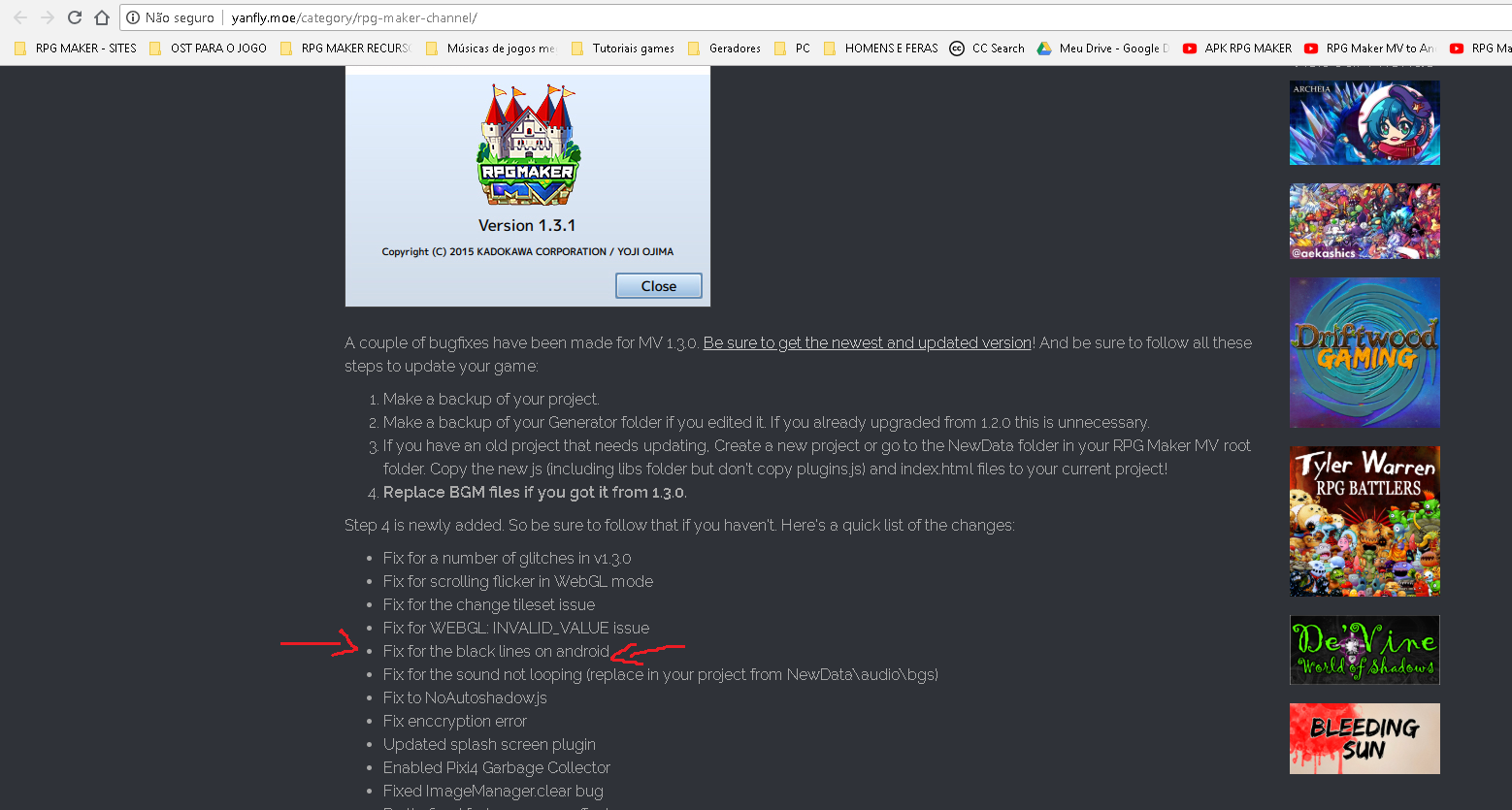 For this reason, I also conclude that this should be some responsibility of the RM MV staff, and there is no relation to how the user performed the procedure in this case.

I was also told by the guys in this forum that the resolution should be multiple of 48x48, and that otherwise, this error could happen because of the GRID lines in the tilesets. But I used native resolution 816x624, which is multiple of 48. And I also tested with the resolution 1280x720 in the exports made with version 1.6.1 of RM MV, and no sucess to.

I just do not know what else to do. It concludes that the way I, the user, generates the apk is not the problem (since, by the official way it also did not work). If i can not find a solution, I'll try to contact someone directly who works with them there to solve it

In addition to all this work (4 days), I find it absurd the official way to generate the APK that appears in the help file of RM MV, to be totally outdated. Even if it were possible to generate the apk without the black lines (or if I just did not care and launched the game with the same lines on the screen), they should update the process as apk does.
Note 1: I used exactly the same files, the same versions of the software listed in the Help file. AFTER I DO NOT GET SUCCESS, I've tried using the updated versions, such as Python 37, The latest crosswalk, the latest API, The latest SDK tools, and so on. And I did not succeed)
Note 2: All attempts made with the latest version of RM MV, I was able to generate the apk and install on Android, but the black lines continued.
Note 3: In some old versions, few attempts I could not get to generate the apk / or I could generate but the installation failed on android).

(FIRST/OLD POST)
Hello guys. Not put much around here, but I'm always reading hehehe. I have a problem with appearing black / white lines when I export to android.

Those distortions have been identified as being caused by non-grid screen sizes in the time since then.
your screen size needs to be a multile of the grid size 48x48, or the interpolation will cause those lines.
Click to expand...

But i use the default resolution of rpg maker mv, and the lines are there.

What do you mean by "multile of the grid size 48x48"? Should the resolution be multiple of 48x48?

The tiles are designed for 48 x 48 tiles, so yes you need to have the resolution in a multiple of 48 in each direction.

bgillisp said:
The tiles are designed for 48 x 48 tiles, so yes you need to have the resolution in a multiple of 48 in each direction.
Click to expand...

Can you post an image of how the game looks in your android device? and possibly your plugin list if you're using some plugins

Engr. Adiktuzmiko said:
Can you post an image of how the game looks in your android device? and possibly your plugin list if you're using some plugins
Click to expand...

I'm not using any plugins :/

Yeah I had a similar problem too after converting for Android, tried in so many different ways and they all lead to the same result.
Part of the issue here is the Pixi I think, it's been updated in the latest versions of MV and since then the Android version shows this kind of graphical error ingame.
I remember converting my cooking minigame in 1.3.1 and it was working perfectly on my smartphone and tablets.
Not sure if there's even a solution to this honestly except rolling back to a previous version of MV.

Dalph said:
Yeah I had a similar problem too after converting for Android, tried in so many different ways and they all lead to the same result.
Part of the issue here is the Pixi I think, it's been updated in the latest versions of MV and since then the Android version shows this kind of graphical error ingame.
I remember converting my cooking minigame in 1.3.1 and it was working perfectly on my smartphone and tablets.
Not sure if there's even a solution to this honestly except rolling back to a previous version of MV.
Click to expand...

Hello Dalph! Thanks for answering. I bought RM MV through Steam. When I try to install other versions, I only have these options that are in the photo.
I have already tried to replace the .JS files (with the exception of plugin.js) by those of version 1.3.5, but it did not work. I saw in this topic - https://forums.rpgmakerweb.com/index.php?threads/thin-black-white-line-on-map.81510/#post-891622 that it worked for a person to do this replacement, but for version 1.3.4. However, it does not appear to me.


Thank you all for the help. I learn a lot from all of you Sir.

I'm sorry for my late reply, I'm a little bussy with my school stuff, you know homework and some school project too.

1. For the thin line, in my case its not solved by change the tiles, I have try many times using different tiles from this forum the thin line is still there. And its not because of my phones (Exynos+Mali) because when I installed in my dad phones Sony XZ (Snapdragon+Adreno) the thin line is still there. But luckly one of the member help me by send me plenty of .js files, she said I have to try to replace all the .Js files exept the plugin.js. And thanks God its works!. The thin line is gone by now.
When I ask where she got all of the .Js files, she said its come from the older version 1.34. At first I'm afraid it will affect the game performance but so far so good. plus one of the best part is i dont have to edit the Rpg core.js again when I create an apk files.

2. Yup you are right Sir, after search in the web a couple days, the only way to change the resolution is using the plug in. (=need more time to learn it)

2a. Nope the Dash option is Off, Sir. And its not a double tap, But NVM because I have try to istalled that in my friend phones which have a less power (Mediatek+2Gb Ram) the speed is the same, Sir. (which I think its too fast). So I think I have to learn to accept that. (^-^)

3. I'm sorry if I not make my self clear enough, what I mean is a sound that play when a player walking around in the map. steping sound maybe?. I dont know what to call it. That sound is different depends on the region, eg: when player walk in snowy area its play sound a, but when the player walk in grass area its play sound b. (I'm sorry its a sound not a music, my mistake). But NVM i think it will be difficult to achieve that without scripting or plugin.

For all of you Sir, thank you so much for the help.
God bless you all.

I'm sorry for my poor english.[/QUOTE]

Do you, or anyone else tell me, what kind of changes does this PIXI file make?
Or is there any other way to do this downgrade? 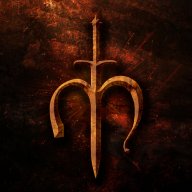 Your solution should be highlighted! You saved my project after so many failed attempts for this problem, and I thank you for sharing it.
I still have some lines, but most of them have been hidden by the parallax of the map.
Thank you so much friend!

Synrec
Updated my state Stacker Script on itch.io, github is down for some reason (probs just me).
Today at 12:38 AM •••

The Mighty Palm
Watching Dragon Quest: Your Story on Netflix and already like 5 mins in we've passed over like 3 hours of gameplay.
Yesterday at 9:33 PM •••