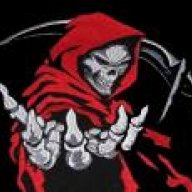 Hello, I am redscores aka Fabian Saam.

I have been in the "Game Design" Buisness for over 9 years, starting with Warcraft 3 Maps to small attempts at HTML/PHP Abominations.

I got the RPG Maker VX Ace on a steam sale and I love the concept and possibilities.

So, after obtaining the maker, I decided to create a RPG titled Land of Krysta.

The Land of Krysta was a wasteland, deserts and deadland ruled the west, south and east. The North is ruled by an gigantic thundra. The People living in this land were poor, hungry and dissatisifed with their surroundings. Suffering from bad harvests and thunderstorms which scourged the lands.

But around 1000 years ago, a circle of humans found a way to harness arcane powers, being powerful enough to terraform the lands and turn the harsh lands into a bountiful land brimming with life. Those humans were called the Circle of Magi.

The humans lived for a long time in prosperity, none of the harsh environments were left and no one had to hunger or deal with bad harvests.

20 Years ago, a shady organisation appeared called the W'Rei, they started to corrupt politics and the government of Kuirass, the Kapital of Krysta.

They spun intrigues and placed their man inside of the government....

5 Years later they assumed the Title of Magi Inquisitors, persecuting magic users whose they titled "Dangerous and threatening to the humankind of Krysta".

They sent out patrols and troops to search for those "dangerous magi" and started to "surpress them".

The Magi, disappearing one after the other, never taking to the weapons even though they had the power to wipe the W'Rei from this plain of existence.

Now, troops of the W'Rei are scouring the lands for the last few of the Magi.

My ideas and features for it:

-Good/Evil System, combined with the Dialogue Systems, this system will use a 0-1000 point system to judge how evil you acted. If you act very evil, you will be able to perform more evil acts, like culling a wounded soldier just because he tried to rob away from the battlefield.

-Many secrets to explore.

My current problem is: How should I do the Dialogue? Like... Should I do it like: A new word or phrase is mentioned, then a short explanation for that phrase is given?

And right now I plan it to be like: Rainy, dark night. The young Basil (our hero) returns to his home.

While approaching the center of the city, he sees all people of the village gathered and discussing some kind of visitors, which turn out to b W'Rei...

Thats kinda my basic right now, I would welcome some creative ideas .

The idea might have some promise, but I suggest a slightly different approach: make a primitive scrap project to explore the editor and tutorials with, before working on your big game.

Your question about the dialogue shows that you aren't very familiar with the options for RPG-Maker-Texts, because it's rather linear without scripts, and you'll probably have to put the explanations outside the regular dialogues. I would suggest adding one of the journal scripts to make an encyclopedia-screen explaining the words after they were found.