Thanks for the support, guys. It means a lot.

However, while of course I would have liked to see it funded, I'm not upset. This is just an opportunity

to improve my presentation.This is not ending my project by far, so no worries. I'm not scrapping the

pick yourself back up.

I am going to reorganize my efforts. Work on the project is still continuing. I have been meaning to post

some of the new battle sprite gifs for the project. They really look great! I have also been meaning to

post some concept illustrations of some of the antagonists. I'm really looking forward to that.  :

As for funding, I am planning to reopen the Kickstarter in about a month or two, but not in the hopes of

funding the entire game. This next time, I'm going to ask for a smaller amount so that I can put together

a playable demo using the new graphics. But, as I am still working on how to approach this, I will have

more details on this later as they become available.

The game is still in production. Perhaps this will give me time to recruit some new staff members like

scriptors. But, again, more info on that later.

Update: I just launched our new Kickstarter a little while ago. You can see our current team, special thanks, and plenty of concept artwork. Plus, here is a new gif for you:

Hey there, the link on the main post still goes to the old Kickstarter, you may want to update it. I'll also be giving you guys a shoutout in our latest Kickstarter update!

Amazing project! Anything just call me (if you need help)​

Thanks for the support everyone!

And thanks so much for the shoutout, Donn!! You don't know how much I really do appreciate it! :

Also, I updated the links so that it should go to the correct Kickstarter now.

Just a little update to show that the project is not dead. Production has been slow because of our budget, but we are still progressing forward little by little. Right now, I'm paying for commissions out of pocket. Sprites and animation are what I want to work on at present, as well as a few tiles. Here is a commission that I have just received for our title animation:

I'll be keeping you updated on major events as they become available. For our next Kickstarter, I'm hoping to have a playable demo game to accompany the project--as well as possibly a short animated video. Please stay tuned for more updates.

That looks so nice

Here you go. This is just a [very] short excerpt from the demo teaser (9 secs to be exact). This animation does not necessarily reflect the final product that will be used in the complete game (as you can see, there are a couple errors), but it shows that the project is not dead.


Amazing animation by ELordy and Rayjii. Music by--that's a secret until the teaser trailer release.
Last edited by a moderator: Jan 2, 2015

oh seem really interesting question how did you make your animation? 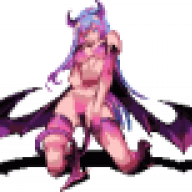 Other than my personal dislike of young protagonists, the game look great. I love the custom art. The style almost reminds me of Double Dragon. Either way, very cool.

@nio kasagami   The description says that it was made by artists from Deviant art, Rayjii and ELordy.
Last edited by a moderator: Jan 2, 2015

Looks great. Very professional. I might have asked this before but is this a Dutch/Belgian project? Since 'Broeder' is a dutch word.

lol, surprisingly no. It was a word I made up when I was younger by scrambling some words together. I liked how it sounded and always used it in my manuscript. Then, a couple years ago I discovered that the word actually translated in another language to "Brother." I was really surprised, but the meaning actually still fit along with the plot line, so I kept it.

Just goes to show that even if you think you've made up a word, you should double check and make sure it doesn't have meaning in another language.

Hehe, that's interesting. And not even a bad thing. It might trigger Dutch speaking people to check out the project because of it. Broeder means brother by the way. It's an old fashioned way to say it though, people now say Broer. (in case this might interest you in any way).

As a general concept, that demo is good; they are going to fix the blonde girl's mouth right? I know it's not a reflection of the final product, but I just had to ask.

@gRaViJa: Actually, that is really interesting! Good to know. I knew it meant "brother," but I didn't know it was an older way of saying it. I love studying languages, though I have never studied Dutch specifically.

@Frostyfirefly: Yes, they will fix her lower face. In fact, her face really moves rough in that sequence, so I cut part of it out (and she's not supposed to be blond, but rather has light brown hair, so this scene needs some work).  The final version will be very different.
You must log in or register to reply here.
Share:
Facebook Twitter Reddit Pinterest Tumblr WhatsApp Email Share Link

Restart
Just finished v0.1 of FOSSIL. It's a plugin that lets you use MV plugins in MZ without editing them by making them use new functions.

I have about 40 plugins tested and working so far (including chrono engine and some other big ones). I hope that the community will pitch in and help improve it, so we can use all the old plugins in MZ.
Today at 11:14 AM •••

TheGentlemanLoser
I really lack discipline and find myself far too often giving into or at least seriously considering the temptation to start a new project rather than following through on a WIP that's no longer a shiny and new idea.

Does anyone have any strategies or tricks for making themselves follow through with things instead of doing this? Like that actually work?
Today at 7:50 AM •••