[Bug/Feedback] Take a good look at the RTP one more time...

Downloaded and installed 1.0.2. Great. Tested to make a battler, notised some strange flickering...
5minutes later in paint I had pinpointed the issue.
It wasn't the game, or a plugin or something like that. It was the sprite used in the generator...

Used pink jacket color instead of default yellow to help a bit with contrast.
This: 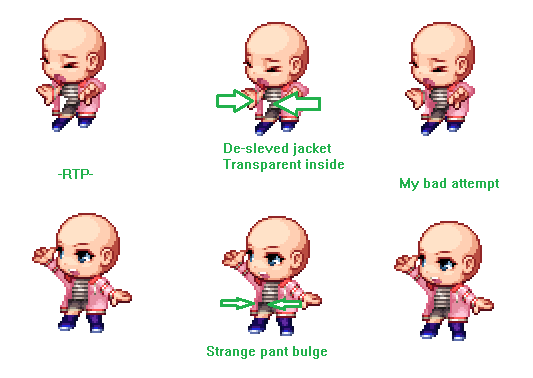 I hope I don't need to draw a clearer picture...

My suggestion is to fix it, and go over the images one more time to see that simular things isn't present on the other sprites.
1.0.2 already fixed some of it, but I think there is more... a lot more. (I have for instance noticing some strange issues with "Select color being selectable yet doesn't change any visual color... can have missed it, so no bug report on that, yet. Check those that got new from 1.0.2 for likley culprits.)

Also... Patch replaced the "gradient" files in the generator folder... Good job that... Only 2 hours of work down the drain...
Please inform us if you are going to replace those files so we can make backups. Or why not give us the complete list on all the files that are being replaced, so my new hat accessory named XXXX, isn't going to be over ridden by an earing with the same name.
Granted, this was my bad, I should have made backups before installing the new version, not of my project, but of the whole program.


Feedback:
This one but one reason why people complain about the rtp...

As for why people complain about the tileset rtp, well, I think I have figurred out one reason why:

These tiles, available in SF_Outside, know what they are for? They look like sidewalk edges... And are used as such in one of the example maps. You could also use them to add "thickness" to "platforms" or pathways that for instance are above a paralla map.
Nothing strange here, except, they were present in MV too, except, when used there, they couldn't be used as the transparent part wrote over the ground-tile information, so unless used in a combination with a parallax, they couldn't be used without leaving a hole in the map.
So why are they there?
My guess these tiles were added to the Tile-sheet, back when layers were introduced. (Think it was RPGM-XP), layers were then removed but the tiles were left as if, even if they couldn't be used as intended.
Several other pieces of the tiles-sheets have simular issues. (One example is the food cart found in SF_Outside_B, which also holds an arcade machine... to be used... outside?... I digress...)

I have a feeling/theory, that the sprite sheet is old, and instead of having a new one made, the artists are given the old and told to update it, without being told how the tile is intended to be used. As clearly seen if you comparer the MV version of said food cart and the stall to the MZ version, were food items replaces food items, but the combination/compatability with the stall is completly lost.

Not only that, but if you right click a map and choose gernete dungeon you get this: 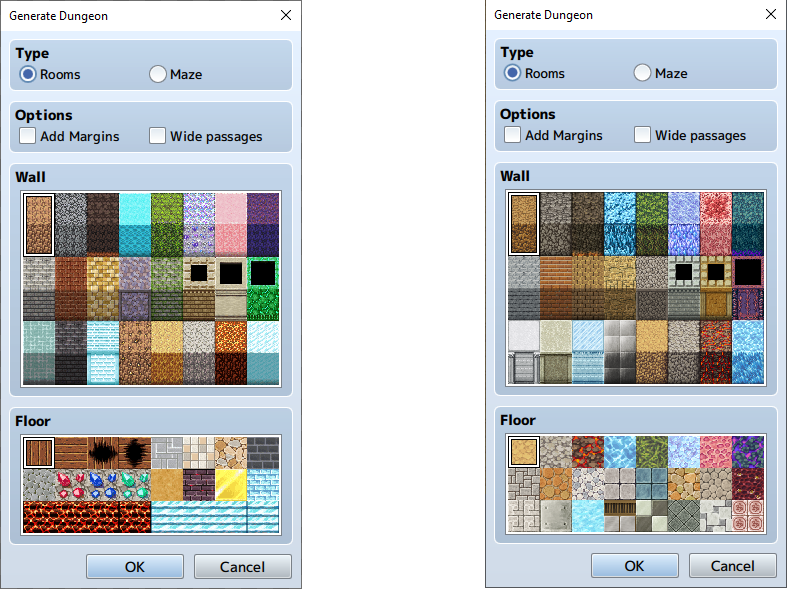 The left is MZ, and the right is MV.
See how MV in most cases manages to align walls with floor tiles?
Granted it isn't a 1:1 100% perfect fit, but the first row is at least.
Programing error? Or a missmatch of the tileset? Who knows. But it is still an apparent thing that once again draws the "blame" towards the rtp.

But if we look at the walls we can see a clear pattern: Brown moutain, gray rock, lava stone, ice, wood, crystal, flesh, corrupted cave. The same, yet diffrent.

Is this bad?
No, absolutly not. These tiles are used to test, to prototype, as such those tiles were probably chosen for a reason (Most common settings). And there are several new ones too, allowing for a nice vararity.

But here's the thing:
Remember the game you played in kindergarden were you were to whisper a word to the person next to you, and they in turn passed it allong? Only to become a jumbled mess when it reached the last person?
That is what I think is happening to the rtp right now. Which mean that each version will be a downgrade hence forth. Now, granted this doesn't apply to the character generator, since it's art has been remade each time. But it still has some parts that are in odd colors, or looks wierd due to other reasons. (Like almost all eyes being to far appart to look "normal"...) But the tile-sets? Frankly, it isn't looking good. (as in for the future, not the pixels...)

Can it be fixed?
Not this time around. I don't think. Not unless they want to send out brand new spritesheets and tilemaps for free, and those are what keeps the company going between releases. Assets and DLC's.
But....
Seeing the state of the current rtp and assets, I doubt most people would buy any others from the same dev.

What should be done then?
By the next time a new rpg maker comes around, re-make the whole whole rtp, from the first pixel, to the last.
This backlash that has happend due to the rtp isn't makeing the dev money.


Sorry for the salt and that I yet again poke at the rtp, but people are poking at it for a reason... Several reasons infact...

I got a sinking feeling that the tilesets won't be getting corrected anytime soon. If they do anything, it won't to be as the small updates that they have been doing. Because even just rearranging the tiles means they got to correct the text help file (which needs correcting anyways) and all the sample maps.

Another problem is the Waterfall tiles. They're missing a shadow along the bottom wall. MV also had this problem but it was less noticeable. My suggestion is that they just cut out the wall. You don't really need A grassmaze and crystal cave waterfall. You just need a waterfall with transparency that can go on any wall.
That'll create holes in the tileset. But I've always felt the palette arrangement was dumb. The only thing stopping me from me from rearranging the dungeon tiles to be neater, is the fact that the waterfall tiles have a particular placement on that first sheet. For that reason, I can't group the lava tiles with lave tiles, Ice with ice, ect...

It would be nice if they went back to XP's style of waterfall that already has the top run-off and bottom water stray included. So we don't have to add extra events. And that's another thing with MZ, it looks like it has 2 character sets for waterfalls that have water spray w/ripples. Either one of these was suppose to be a run-off for the top edge of the waterfall, or, one of them should have been purple to match the purple waterfall.
But then that purple water set seems out of place too and doesn't match anything, in my option. I think the demon castle set is unfinished in general. And then when you start looking at corresponding battle backgrounds, it suggests there's a lot missing.

I agree, I doubt any fix will happen any time soon.
That said, it is needed. Or rather, a total remake is needed. Not that they are all bad, it is just that it is added too, edited, from version to version. Updated, but never trully replaced. This will lead to problems down the line.

As an example, this time we got an arcade machine on the outdoor tileset and an atm for indoor use. True it isn't hard to change them, but problems like these keeps piling up.
If they now put in layers (again) and boast about it, shouldn't tiles, such as the grass growing over stone plates, be grass growing over transparent? Or as Coyotecraft mentioned, the water falls, be transparent?
That way you could change what stone plates are under. Same with the sand tiles. But no, the old tiles were these 2versions, instead of giving options for 10 or 20, keep the old version instead, just redraw it with a slight change.
Rpg maker is a fun sandbox creator-tool, but frankly, things like this annoy me enought to take the joy of creating a map away from me.

LunarFlareStudios
Tomorrow is Halloween! I can't wait to go to Boxi Park and show off my costume! Also one of Dad's friends is staying the night, so he might get to see the show.
14 minutes ago •••

CHKNRAVE
Welp, I just finished my favorite part of RPG making which is creating skills, now onto the tasks I like less so the motivation is lower. At least I'll get to create new ones while designing enemies!
Today at 6:10 AM •••

Archaeologistic
New to MV... Awesome forum, cheers everyone.
Today at 6:01 AM •••