I thought as many other authors already have created a central thread for all their plugins I will do this aswell.
The terms of use apply to all plugins posted here and in the linked threads.

Terms of use:
Free for non-commercial and commercial use.
Credits not required, but appreciated. (It still feels odd to be credited by internet pseudonym)
You may not repost those plugins. Please only link to them.

First of all I know Tsukihime has written a Shop Manager and propably other authors have done similar things and I didn't think I would be able to do the same, but it actually didn't take that long. Terms of Use: As always totally free for commercial and non-commercial use and it doesn't need...

forums.rpgmakerweb.com
This plugin was meant to just add goods available customization and limited stock to shops, but since
then I extended it with a lot of features and compatibility fixes. I became quite feature bloat.

Make more out of weather than just a visual effect

Already a while ago I written myself a whole bunch of weather related plugins. First I wanted to make this just one plugin, but it took not long to realize it became a mess, so I had to split it into a core an extension plugins. Pretty sure some of those things I did can be done with simple...

forums.rpgmakerweb.com
A collection of a lot of plugins that change mostly battle related functionality when weather is active.
However they require a plugin from another author that actually displays the weather in battle, because I didn't want to plugiarise this functionality from those plugins.
A new plugin that can be downloaded from this thread.
This plugin links two characters together. So character 2 will always follow character 1 on it's movement routes.
This makes such movement routes as the one in the screenshot below obsolete: 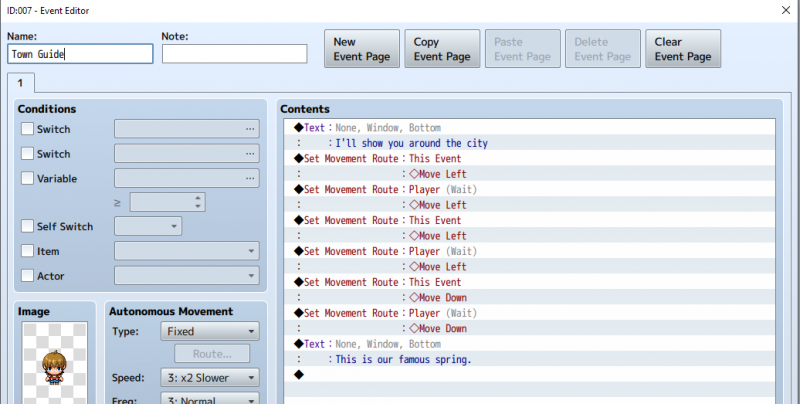 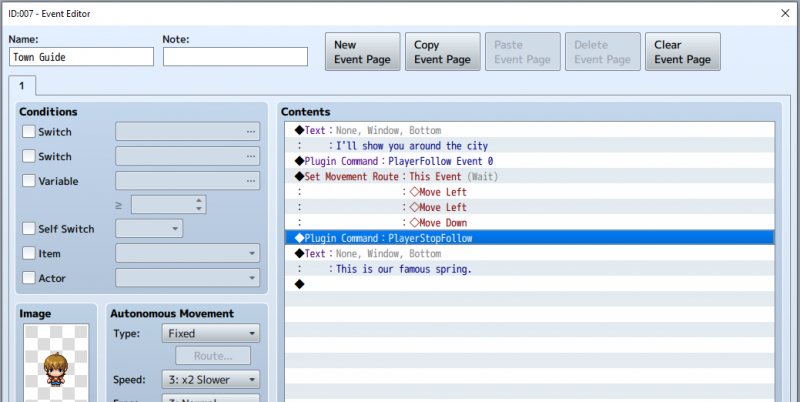 The plugin does have the following commands:
EventFollow <EventId> Player:
Makes the event with the EventId follow the last follower in the players party or the player if it doens't have a follower.
Example: EventFollow 1 Player
Use 0 for EventId to apply it to the current event

FollowChain Break <EventId or Player>: The whole follow chain of the given event or player
will break. Each character in the follow chain will then be seperated again.

If you transfer to another map all follower chains are removed.

These plugin commands are mainly meant to be used for movement route eventing only.

Comment tag in Event Page <FollowEvent: Number/>
The event will automatically follow the other event on it's movement routes as long as the
page on which the comment tag is set is the active page. The Number in this comment tag
must be smaller then the number of this event. The comment tag must be at the start of the
event page.
e.g. <FollowEvent: 4/>

Plugin Purpose This plugin let's you customize how category windows are shown in the shop menu. It is plug and play. By default it changes nothing. It comes with three plugin parameters: Buy Categories Window: Contains a switch whether the buy window should be categorized, aswell as layout...

forums.rpgmakerweb.com
Can add a category window to the buy menu or remove the category window from the sell menu.
Has also layout customizations for the category windows and the windows affect by this change (The Buy and Sell Window).
I don't need this myself. I've just written this after having read the same plugin request multiple times.
It was actually hard to implement with all those compatibility requirements, but I guess this was still the solution with the least amount of effort and highest amount of compatiblity possible.

that screenshot 1, with all moveroutes is a bit wrong, while you can move event
moveroute and than another moverout for the other event below. but its still 1 less
moverout to add.

But I have 2 question.
1) if you have say 4 events thats need a moverout, (same direction)
do you need 3 plugin commands to use?

2) if you have 4 events, (each split a different way) but moves at the same time,
are those still manually?

(because I believe, this is pure focust on following the player or event on its own.)
but while its a nice plugin, there is a similair one, works differently, but
if question 1 applies, than its makes a wonderfull plugin for some cases,
more in other projects that uses bigger groups to walk.

2) Yes they are still manually. This is really purely focused on following the player or another event.

Which plugin is the similar one?

this is more event vs event, but not follower thing like yours, but it can walk
event and player in same direction or mixed up, but no idea for multiple or breakups
like this one .

if not, than I know more than enough, it can come in handy though, better than 4 moveroutes in 1,
especially if it had 20+ commands (with yep moverout it can be a bit shorter) like UP : 3
but, I like your plugins, keep up the good work

Because I used the same logic the original followers use to follow the player and I've set up just a double linked list to store the following information for the events and the player I sadly cannot do something like event 1, 3 and 4 all follow event 2 at the same time.

I found out my plugin has to be placed at least under YEP_CoreEngine if also installed.

Updated to Version 1.1 with the following changes/additons:
1. Characters will now copy the through attribute from the character they are following.
2. The through attribut is no longer automatically set to true when a character enters a follow chain. Instead the collision check has been ammended to exclude characters from the follow chain.
3. When the active page of an event is changed the event will automically be removed from it's follow chain.
4. New comment tag <FollowEvent: Number/>
The event will automatically follow the other event on it's movement routes as long as the
page on which the comment tag is set is the active page. The Number in this comment tag
must be smaller then the number of this event. The comment tag must be at the start of the
event page.
e.g. <FollowEvent: 4/>
5. New plugin commands FollowChain and FollowChainBreak. Which I will explain in an update of my original post.

Chainbreak is something very usefull, Now that I think of it,
always thought it only works with NPC players and moveroutes,
but you can even do minecarts and break the chain so they split ways XD