I seem to have an issue with changing actor's image during my autorun event. Whenever actor image change occurs, there's a split frame glitch that makes character transparent, as if it couldn't load fast enough to replace the image instantly. I've tried working it out both through regualar image change option, and scripting/refreshing just the character sprite.

My desired effect is to change character sprite to emotes, and make the actor shake his head by movement route commands.

Below I'm attaching 2 images, first being the one that works, the second being that one that has 1 frame delay.

It's really important, if anyone's got a single clue on how to sort this out I'd be grateful. All I need is to change actor's character sprite without having to witness 1 empty frame in-between.

I'm only guessing here, but in your second event (the one that has the delay) you're using a script command followed by a refresh.
Most likely that is what is causing the problem, because the script box is another interpreter level and not a direct sequence. So there is a delay between the change command and the refresh command.
If that guess is true, then you can't solve this with script commands inside the script interpreter, you'll need to use either the event command or have a plugin provide a function that combines both script commands into a single function (so that the interpreter doesn't cycle between the commands)

Why are you using the script command there instead of the event command?

Isn’t there a movement option (set move route) to change character image? How does it look when you use that?

@Andar My bad, I've tried the script box method AFTER it didn't work through normal command and uploaded wrong screenshot. It was happenning in both cases anyway though.

@SwiftSign I've had no idea that there was an option to change character's picture in the movement route command. This actually sorted my issue, it would seem there is no more lag in-between, thank you!

@Quanee Please note that red text is reserved for Mod use (heavy warning/important information). I have, therefore, edited your last post and turned the red text to black.

Well, after lots of character swapping it'd seem the issue back - no matter what kind of actor change method I use. It worked after SwiftSign managed to give me a hint. After I decided to use different character templates it started happening again. I went back to see if maybe it was something related to my character tilesets but it won't work anymore even on the old ones. I'm attaching a pic of my event again. All other character swap templates seem to be working perfectly, just this event being buggy. 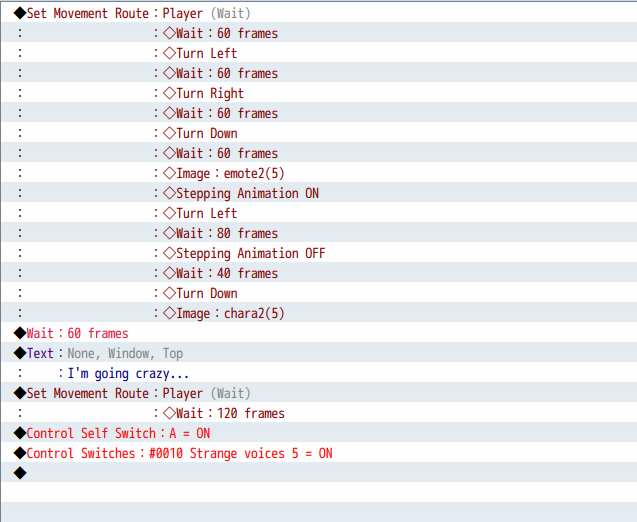 then show us the sprites you're using as well, and try to explain the problem in a bit more detail.

If it happens only sometimes, then it's either a timing problem or really a problem of the sprite loading size/time.
If it is a timing problem, it is most likely caused by too many processes on the same map - if you copy that event to a new, empty map, does it still fail or does it suddenly work again?
and how many parallel processes have you in your common events?

It's really tough to say why it stopped happenning out of nowhere and then came back. I've tried disabling all the plugins but the problem still persists. Below I'm attaching pictures of the sprites I'm using and a gif of what exactly happens. The second my actor reaches the table and looks right/left, is when my autorun event starts. And the moment the character glitches is when I swap its image to shake his head. 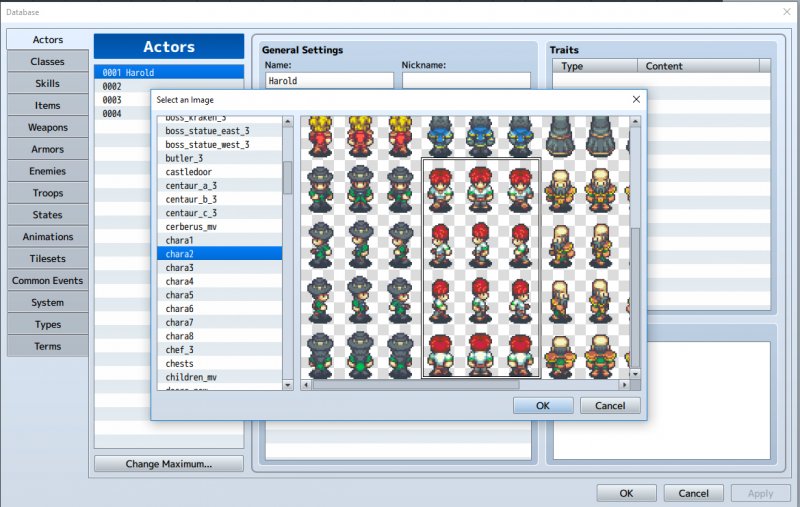 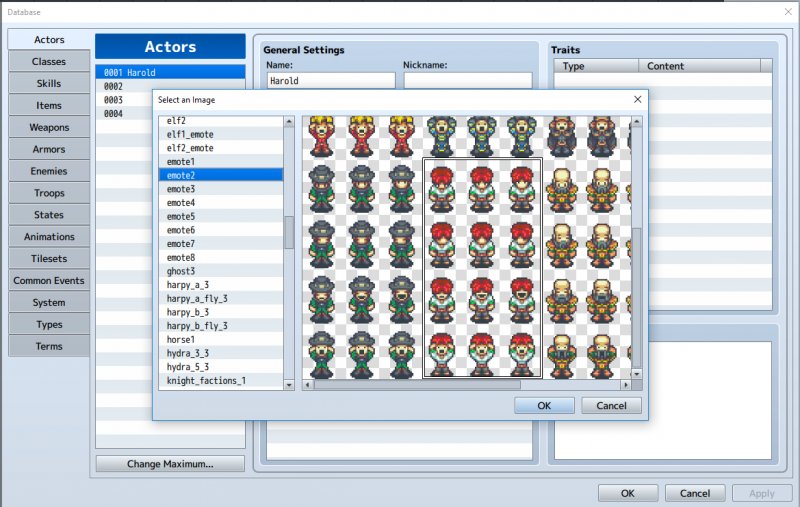 As for parallel events, I've got none running on that map. It's all autoruns and player touch/press key.

There aren't that many processess going on really, just some text and a little bit of moving, nothing extraordinary. I have also tested the same route command on an empty map and the issue still occurs. As for spritefile, I'll send you them through PM as I'm pretty sure I shouldn't be sharing something I've had to buy.

Quanee said:
As for spritefile, I'll send you them through PM as I'm pretty sure I shouldn't be sharing something I've had to buy.
Click to expand...

That's completely correct, it is forbidden to share purchased resources.
But in that case it would have been enough to point out where you got the sprites (and as part of which paket), because all shop resources have been checked for the errors I was guessing at before they're sold.
I just can't identify every shop resource and didn't know that that was one.

At the moment I'm out of ideas as to what could cause this.
Can you attach a screenshot of your plugin manager as well? Even if you said that this happens with all plugins off it might still point to something. And I hope you started a new game for testing after deactivating the plugins? Because part of the plugins is stored in the savefiles if a plugin is active, and loading those after disabling a plugin can still have parts of it running.

I have started a new game indeed. As for the plugins, here they are: 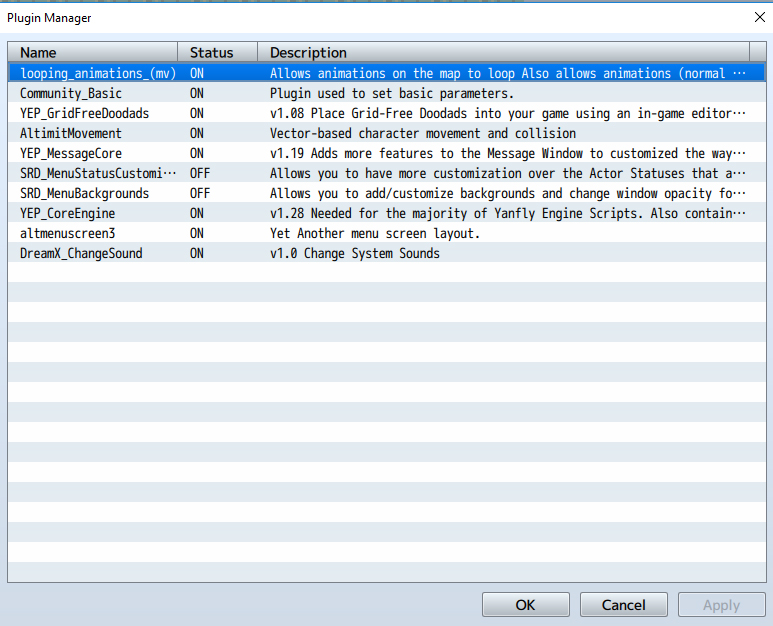 Well, if I don't manage to sort this out, it's not the end of the world. I can always use custom made animations made out of spritesheets, it's just much more time consuming.

OK, there is one thing on your plugin manager that is wrong - the order of plugins is important, especially with yanfly's plugins. you have to place yanflys plugins into exactly the order in which they're listed on his website.
Where the others fit best is something you'll have to test for yourself.

Well, that's sorted, wish it would've fixed the issue though . As for the actor image change, I will use custom animations from now on, hopefully no more issues arise in the future. Thanks for all the help and sticking until the very end!

So for anyone that is encountering the same issue as me, I think I have finally found a solution - "Galv's MV Image Cache" plugin. It lets you pre-load the required images before its shown on the screen for the first time. After lots of testing I found out that my issue was happenning only for the very first time (to load the spritesheet), afterwards it worked fine every time.
You must log in or register to reply here.
Share:
Facebook Twitter Reddit Pinterest Tumblr WhatsApp Email Share Link

Meowsticks
When you spend hours working on an optional segment that players will only be in for 2 minutes in a single playthrough. That's the life right there.
Today at 5:44 AM •••