RMMV Check filesystem the game directory is in

What version of your Windows?

But there really must be some restriction on installing your operating system.

Try sending this command at the prompt (CMD):

I did the test on other computers and asked some friends to test them too, none of them failed.

It's probably something on your computer, to solve it I would have to find some other method, try this one that was the first one I mentioned when you opened this thread:

It worked! Although, it got the filesystem of EVERY drive... in the plugin, how will I be able to set things up to where it checks for where the game is located and not peep through each drive? I don't wanna weird the player out.

I'm a little rusty on the Windows command line issue, but isolating the line that just contains "HOMEDRIVE" or "DRIVESYSTEM" is easy.

Test at the command prompt:

Code:
Edit:
"Rusty" in this case is slang, some may not understand, as my first language is not English, I may be saying something confusing.
So I'm sorry.

I'm away from home, when I have time I'll check if NW.js correctly returns the partition where the game was run.
Equivalent to this command in Batchscript:

Using the command (wmic logicaldisk get Caption,FileSystem,FreeSpace,Size | find "%homedrive%") returns only C:\'s data, even when pointing to a different drive. Don't worry, your English is perfectly fine and I know what you meant by rusty. In this scenario, it means you haven't used the Windows CMD in a while so you might have forgotten some details.

kanyatanishande said:
returns only C:\'s data, even when pointing to a different drive
Click to expand...

Now I got worried, this is the second common Windows command I've used since the Windows XP that doesn't work on your computer properly, try without Find:

Code:
I need to know if it works in both situations:

This is what happens. Like I mentioned before, I wanted it to point to a specific drive, not all of them.

kanyatanishande said:
I wanted it to point to a specific drive, not all of them.
Click to expand...

But I showed you two commands, you only showed me one:

As I said here, the isolating part is easy, I can do it through the terminal or with Javascript:

Dev_With_Coffee said:
but isolating the line that just contains "HOMEDRIVE" or "DRIVESYSTEM" is easy
Click to expand...

So when I ask someone to do a test and show me the result, it's because I need it to be detailed and not just:
"That happens..." or "It doesn't work"
I need the console/terminal image or text pasted here.

On how to get the partition where the game is running, the NW.js itself already informs the process.env object.

Edit:
I ran the game from a pendrive:

Line 1: Shows the result that I was already using in the Plugin, which I will no longer use.
Line 2: Show result if using environment variable in Windows Command Prompt, functional, but running "Run as Administrator" will change.
Line 3: shows the execPath object, I'll probably use this one, so with a simple Javascript command I'll just isolate the partition caption.

Dev_With_Coffee said:
So when I ask someone to do a test and show me the result, it's because I need it to be detailed and not just:
"That happens..." or "It doesn't work"
I need the console/terminal image or text pasted here.
Click to expand...

Although there is no sensitive information in this command, I will respect your wishes.

The problem now is different, there is something on your computer that not all native Windows commands work, I made the Plugin on a computer that does not have English as the default language, but I tested it on other computers, with different operating systems and it worked perfectly.

So I see no reason to have opened another nonsense thread as if the problem was the issue of listing all the units:


kanyatanishande said:
Not ALL drives, just the drive that HAS THE GAME ON IT.
Click to expand...

It wasn't complicated, I clearly explained all the points I used to create the Plugin and the progress happened, but it seems you didn't understand that the Windows Command Prompt has nothing to do with Rpg Maker...
Let me explain again, THE ONLY WAY TO READ THE SELECTED DISK TYPE FILE SYSTEM IS THROUGH WINDOWS, JAVASCRIPT AND NW.js CANNOT DO THIS WITHOUT SUPPORTING SOME SOFTWARE OUTSIDE THE RPG MAKER.

It's as if you read some parts of my previous post and disregarded what didn't interest you.


kanyatanishande said:
Other than that, title says all. Doing a new thread since the last one went ****ing bonkers.
Let's get somewhere this time, thanks.
Click to expand...

It's not hard to see that I was the only one who still made some progress and found a way to fulfill your request. In other words, how is another person going to find a walk easier if I've already explained how it works?

Even if this were a paid service, the result would be the same, it worked on several other computers, except yours... which suggests that it is a small adjustment. So it wasn't my fault, it was really lack of collaboration in gathering information to understand the problem.
Or do you think that to create a smartphone application or computer software, developers don't do tests and yet some users experience incompatibility issues for some factor that was not considered?

There is a possibility that your game's RPG_CORE is not really updated, what was noticed here:

So to solve the problem only if you collaborate, but you've already proved to be something that won't be easy, because I had to ask more than once, this in very long time intervals which made it a little frustrating.

Considering these factors, I'm sorry, but I can't help you any more than I've already done.

Even though I've put a lot of effort into it and spent all this time and I haven't seen any signs of recognition, I won't be upset.

And please, read this entire text if you are going to answer me or still want me to find the problem, even though the Plugin is already working.
I removed all old links.

(I wrote from my cell phone, sorry if there is something confusing as English is not my first language)

> even though the Plugin is already working.
clearly not if it doesn't work for me
checking the file system is like one of the simplest things I've ever heard of, the fact that this is apparently so complicated is just mind blowing. I bet if I knew how to code I'd be able to do my own **** and I wouldn't even need a forum account to ask questions for the smallest problems.

kanyatanishande said:
checking the file system is like one of the simplest things I've ever heard of,
Click to expand...

I don't know why you ignore most parts of my explanations and instructions.
If it was something that simple, without the need for NW.js and Windows command line, someone besides me would have already shown you how to do it.

I'm sorry, I'll explain it again, I was the only one who got this result, but you confused Windows Command Line with how Rpg Maker works:

kanyatanishande said:
View attachment 203386
This is what happens. Like I mentioned before, I wanted it to point to a specific drive, not all of them.
Click to expand...

I explained it, explained it again and you can't understand something so simple:
Another very simple thing, you at no time confirm if you tried to update the NW.js, RPG_CORE and other files from the JS folder.

Apparently you want it to work as if I had a Magic Wand, I already explained to write "code" requires testing.

As you're going to ignore again what I wrote I can just wish you luck and tell you I'm sorry because I don't get paid, I'm a volunteer.

Until Tuesday I post a video of the system working with a game with JS and NW.js files updated and running on different operating systems.

But I won't comment more here so as not to displease you. Now if you can ask yourself:
"Why did the moderator close my new thread?"
(If you have any complaints, you can speak to the moderator who closed your other thread, because you've been reluctant to get any help from anyone who tries).

After that, I reached the limit of my patience.

HexMozart88
"16. Do NOT contact other members by private message, on the forum or status feed, inviting them to put additional tools (such as leaderboards, ads, etc - whether yours or another person's) into their game."
Oh no. Necessity is the mother of invention. Do I want to know what happened?
38 minutes ago •••

48Tentacles
Early WIP for my next entry. Since it's early you're going to need to wait a little longer than usual. What's that? You'll find out in my next update!

JohnDoeNews
20 festive cards can now be unlocked in BiteMe!

The cards are permanent, but can only be unlocked in December!
Once the year is over, you won't be able to unlock the cards, or to upgrade it.
https://johndoenews.itch.io/biteme-storymode 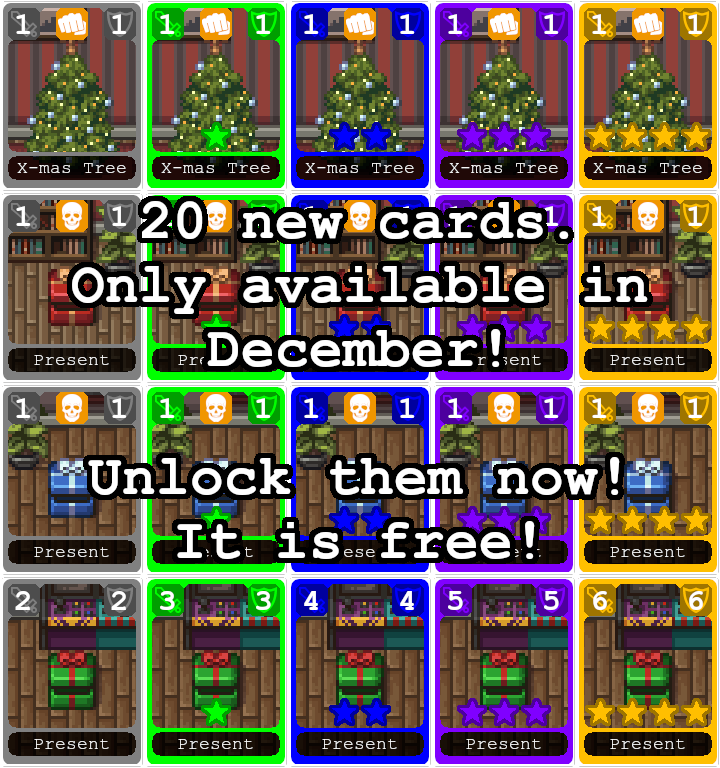