I came across this game on a site niconico.
https://game.nicovideo.jp/atsumaru/games/gm5678?link=blogparts

If you play this game, you'll see the event moving in a perfect circle from 2-5
I wonder how you implement that.

I'm using the same jump action plug-in as this game.
There's no way we can implement this.

Can you introduce the plug-in or method related to it?

(You can see it here, too. Please look at it from 15:55
https://tkoolgamerev.com/tkool-mv/baney-jump)

Yes, by default characters don't stop at non-integer coordinates. You can still move in a circle, but it won't look very smooth because character sprites move in straight lines between tiles. Here are some ideas, though~

You might be able to fake it, e.g. make a long transparent picture with a visible shape at one end. Then use the Rotate Picture command to make it spin around its origin. It should look like the shape is travelling in a circle. This has limitations:
Things get complicated if you want to do this with map characters...

A relatively simple, but sort of hacky, way to do this visually is:
This repositions the character each frame.

However, non-integer coordinates basically break RMMV's default collision checks. If you need to check collisions, you can manually check the player's position each frame and start the event if necessary, e.g. add this to the end of the move route Script:

JavaScript:
I.e. "if the player is on my tile, start my event".

You may be able to find a pixel-movement plugin (maybe you are already using one) to solve the "non-integer coordinates" problem. It might even have built-in circular movement options! If not, you'd need to use trigonometry (see the example in the spoiler above) to decide where to move.

Sounds perfect.
It's working perfectly.
However, can you tell me how to modify this code to control coordinates, range of motion, direction, and speed?


Thank you in advance.

JavaScript:
This sets/increases the time variable (stored as a new property on the event). The motion starts at this._t = 0 and increases by 1 each frame. You can swap the 0 for a different positive number to change where on the circle that the event starts its motion.

JavaScript:
These lines set the position of the event. Together they define a circle with:
At time this._t = 0 (i.e. starting position):
Remember that RPG Maker MV uses a left-hand coordinate system:

caethyril said:
Angular speed: π/300 radians per frame (i.e. 600 frames per full circle).
This also controls the direction: make it negative to go the other way.
Click to expand...

What happens if x,y have different speeds?
I'm testing it, but I don't understand.

Then the motion will not be circular (except perhaps in some very contrived situation). For circular motion, x² + y² must stay constant: having different speeds breaks this condition. The actual curve produced will depend on the ratio of x and y speeds.

A couple of examples:
If you want more details, I suggest looking up parametric curves.
Last edited: Jul 28, 2021 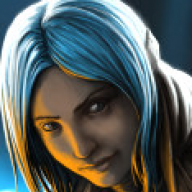 This is very nice.
I was able to make it look like a fairy moving around the player.
Also, I was able to move the event circle into an ellipse by changing it to a value like this._realX = 9 + 5 this._realY = 7 + 3 instead of a perfect circle.
However, how should I set it to draw an elliptical orbit diagonally as shown in the image below? 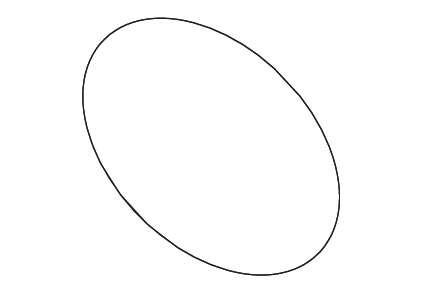 @imcatman - that looks like a 45° (π/4 radians) rotation clockwise, i.e. +π/4 in RMMV's coordinate system. To get there, you can apply a rotation transform to the original equations:
Applying the rotation to simple elliptical motion (matrix multiplication):
Or, in context:

JavaScript:
The origin coordinates are unaffected because the rotation happens around the origin.

Edit: minor corrections! I was getting confused about the left-hand coordinate system.

this is so complicated, but really nice what you can do in the engine.

you really should create a minor demo of it of those 2 examples (if you dont mind) so I can store it.
not sure if I can use it or have a purpose for it.

but maybe something around it to avoid obstacles that you cannot hit the event with.
but you are a beastin in this kind @caethyril , you know your stuff around this.

I dont understand how "cos" and "sin" works in math (so dont explain).
but still it's amazing, I adore you (while I try to learn JS more, also for solution you provided to others.
I never knew that or how to event this kind of thing.

I just wrote up a more accessible version of the move route script including rotation, in case it helps:

JavaScript:
This defines some values at the start so it is easier to edit:

JavaScript:
Description:
Since this is a script call, you can use formulae for the values if you like, e.g. for something that orbits the player:
As mentioned before, this workaround breaks RMMV's default collision system for that event. If necessary, you can manually check the player's location and start the event, e.g. by adding something like this to the end of the big line of script:

JavaScript:
Given how involved the script call is, I wouldn't recommend using it a lot on the same map.
Here's a demo project with a few examples for anyone who's interested:
Remember to extract the files from the archive before trying to open the project in RPG Maker MV.

I checked the demo out quickly, but the 4 looks stunning, just amazing,
not exacly sure about the tile around the player, but I dive later deeper into it
to see how every works together,amazng job and a huge thank you for the mini demo.

this helps me out alot in case I see fit for my game somewhere and increase time,
which I need to lower to faster speed.

thank you again for the demo, it helps alot to understand for many people, rather than keep
asking it.

it can have other purposes like above player and a moving light circling in a bigger circle.
but a great start.

Thanks for explaining.
This is great!
Diagonal oval launch worked fine in your script call.