Synopsis: To be honest, this was one of my experimental “Okay, I’ve got this cool new RPG Maker toy, what can I do with it?” attempts at a game (Not quite my first); however, it’s an attempt that I’ve stuck with for a short while, and I’d like critiques on what I could be doing better with this first part—I’ve decided I’m going to stick with this one.

It isn’t all that much at present; you start as a mute protagonist (this is very much lampshaded) who finds herself stuck in some sort of cave; the implied goal is to escape. She meets up with a louder, more jovial partner along the way (Catarina), and begins to collect orbs—relics of mysterious power that will become more important and better-known entities as the game progresses. I’ve used vanilla VXAce elements and some elements from a Cthulhu Mythos resource pack by Degica , and I plan to edit Clarinda’s hair on my own (I’m not really satisfied with the game’s group of hairstyles; I plan to go for something that looks a little more African). I intend to add more Lovecraft-esque elements as the game progresses, too, so be on the lookout. Don’t worry—the brief foray into that purple “other world”, as well as the sapient signs, will eventually be explained—I’d prefer not to spoil it, but it’ll all be cleared up as the story progresses.

Thus far, the game has a puzzle that you may or may not solve, depending upon the actions you take, one orb acquisition, and meeting Catarina. There are a few dead ends—for example, I haven’t linked up Catarina’s hideout to the rest of the game yet, mostly because I haven’t made it ready for public use. The game currently ends just after you meet Catarina and double back into your original cave system, with a little extra depending upon whether you solved a specific puzzle or not. Feel free to poke around and see what happens; there are a few choices you can already make, though I intend to gather all of the threads closer together as this particular phase of the game draws to a close and Catarina and Clarinda go farther into the plot.

Also: I did use a script that manipulates the camera into centering on events. I don't know whose it is (I'll hunt for it!) but it isn't mine. Stay tuned for updates on who it belongs to. Yanfly, maybe?

Update: Radical alteration to maps and addition of tutorial. 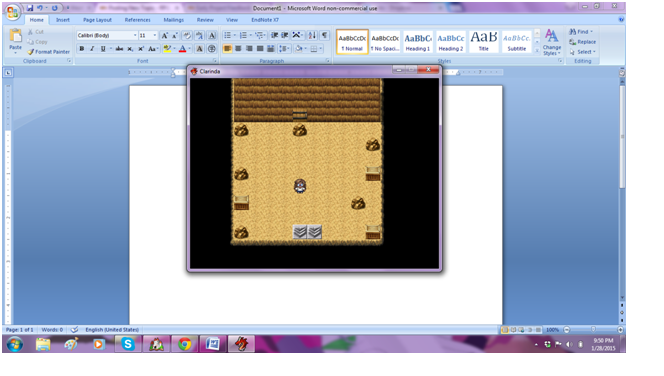 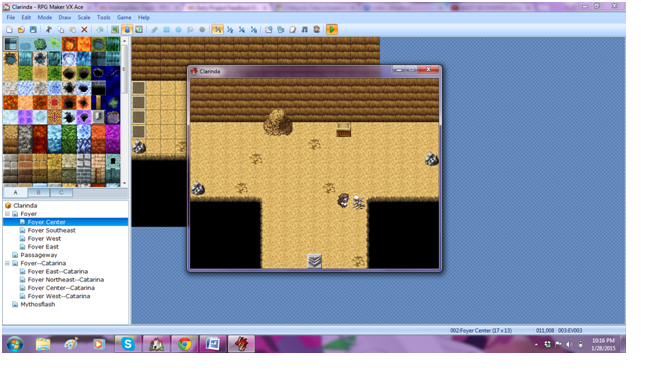 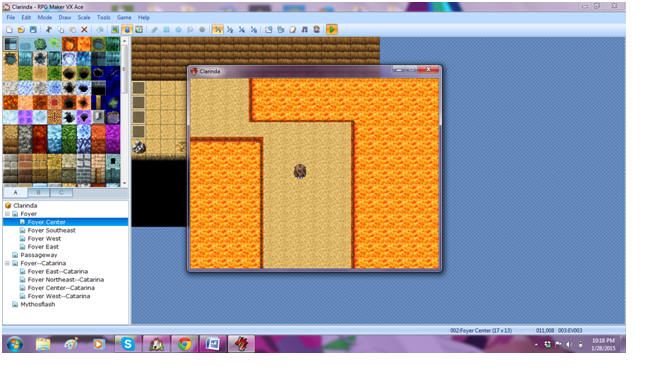 Okay! I played this. It's a very short demo, but I think I did everything I could do. ((Though from your comment I feel like maybe I missed doing something. You mention 'a few choices to make' and I only really remember having the choice between breaking the sign or not))

Since this is your first game and you specifically wanted feedback to help you get better with the program and such, I'll try to help out.

First off, the maps. They are really needlessly large and very empty. That's a common thing with someone making a first game. I suggest downloading some other games on the site, ones that seem to have high reputations, and see how other people handle RTP mapping to get a good feel for it. Tightening up your maps would be a first good step though. With no random encounters of any sort, there's really no reason to have everything be so huge. It just creates annoying padding time for the player to walk from point A to point B. (Also! Tighter, smaller maps are easier to decorate interestingly because you have less space to fill ;D )

The other big thing I noticed about this game was that it was lacking in a lot of direction. I do understand it was aiming for a mysterious sort of intro, one where you aren't supposed to know why or how you are where you are - so I'm not really talking about story direction. Technical things - like that I could break rocks with the pickaxe - are usually things that a game would prompt the player in some way to know. The same thing with searching the sign multiple times. Most of my game time was spent figuring out that that was what I was supposed to do. Signs aren't usually something the player reads over and over in most games - so some sort of direction that the signs messages can change would be good.

I liked both characters face sets, and Catarina's dialogue was well written and enjoyable from what little we saw of it. It's hard to comment too much on character or story as it is now, since there's not much to go by.

As for actual execution, it seems you've got a lot of the basics down. (most importantly, you obviously know how a self switch works - since rocks stay broken between maps, and the chest I found the pickaxe in doesn't give me pickaxes endlessly forever. Which is nice! In a very first game, you usually see a lot of mishaps with transfer points or self switches especially!) Your puzzle worked without any technical hitches, passabilities all seemed fine. Again, just like character and story, there wasn't too much happening to make any big comments here - but I've seen games mess up in these areas for first timers. (this also, presumably, tells me you tested your game before posting it! And believe it or not, that's a reason to get a gold star in my book, because SO MANY PEOPLE don't do that. )

The empty chests sorta made me mad, especially if I walked a long-ish distance to get to them (the one that's one map straight south from the door that needs the orb made me especially frown), but the Catarina mentioned them - so maybe that was where I was missing something. Which speaking of that cut scene, it would have been nice that Catarina walked back to Linda after talking. She walked over to the treasure chest, but then when the scene was done just up and vanished.

Anyway! Overall, you've shown your capable with the basics in events and that you can handle early characterization well. It'll be interesting to see where this goes! And where you go with a bit more practice at the program. Certainly study up on that mapping though. Have fun and good luck!

PS Oh yeah! Something I forgot to mention. This game file is HUGE for what this is. I suggest next time packaging the game without the RTP files. Especially if you are posting it here only to get feedback from others who use the program - most of us have the RTP. Later on, when you make stuff you'll share with larger audiences, you can just put in what you actually used from the RTP rather than telling it to put in the whole thing. 200+MB for 10minutes of playtime on very similarly graphic'd maps is more than a bit of file size bloat.
Last edited by a moderator: Jan 30, 2015

Made several edits based on Makio-Kuta's suggestions, including tightening up the rooms and decreasing the file size drastically.

alltheyuriz
All I've done today is sleep ; n ; I don't feel like eating my tummy says no I hope you guys are having a good day tho
Today at 4:43 AM •••

LyonBuster
Change of gears, WoP is still on going, GAN would be for a long future. Personal issues and studies keep going, HOWEVER, i recognised I started WoP badly and i needed to start from scratch from tilesetting!! Happy RPG Making Everyone!!!
Today at 4:24 AM •••

Tea's Jams
Come join us while we play this fabulous game, Kindred Novel, by Birdbunch. We'll be checking out 2 hours today and 2 more tomorrow! Starting at 4pm EST

I do things. Here are some of the things.

Trihan
Going live in 10 for part 2 of Kytt's playthrough of Day of the Tentacle Remastered! Twitch
Today at 2:51 AM •••