So I wanted to have an event with two different triggers, one triggered by the action button and one by event touch.

As of now I have two events pages - one is triggered by event touch where the event enemy sprite inflicts damage on the player upon touching. The other event is the player "kills" -the event sprite disappears - upon the player hitting the action button against it.

Because I have these set up as two different event pages, one happens before the other rather than both happening at the same time - the player has to wait to be hit to hit the enemy back. I just wanted to know if there's any way to do this? I'm thinking of something like the combat in Crooked Man, where the monster attacks the player and the player could hit the monster before/after/during the attacks.

yes, there are ways to do several things at once - but they depend on exactly what you want to do, there is no single solution that works for everything but several different solution that all work for specific cases.

So please post screenshots of your events so that we can see what you're trying to do, then we can tell you how to solve the problem.

Okay, so I actually figured this out pretty quickly thanks to this video:
Basically I wanted to make an action RPG battle system without scripts. Since I spent way too long googling this only to find dead-ends, here's a image of the event from the video (in case for some reason the video disappears and another wanders into this topic looking for this answer): 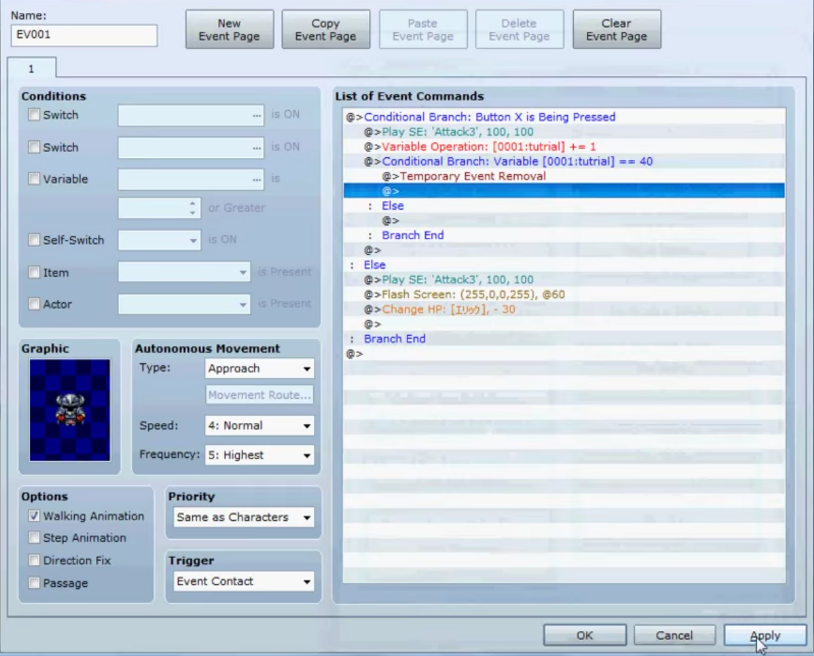 yes, that is one of the possible solutions (and the one I was thinking about).
But as said there are others, all having different advantages and disadvantages.