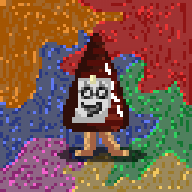 If some one could convert my custom icon set to work with RPG Maker MV I'd really appreciate it.

It would be easier for someone to help if you posted your icons as pngs, not a gif. Right now I almost didn't see that you'd posted them because they flashed by so fast.

My bad. Do I post them all separately or--?

It's not very hard to put together a tile sheet, no harder than separating out an animated gif into individual pngs. The hardest part is getting it spaced correctly. The easiest way is to open up the current icon file in an art program that supports transparency (aka not Paint), expand it downwards by 32 pixels, and paste them in at the bottom so that they're each spaced to fit within a 32x32 grid. Most art programs support a grid overlay, but you could also make your own by choosing a color that won't show up anywhere, making a square that's 32x32, making another square that's a different color (that also doesn't show up anywhere else), then alternating them so that they touch but don't overlap. It's easiest if these square are on their own layer beneath the icons, but it's not required. When you're done you can select just those colors and delete them.

I'd just do it for you instead of explaining, but if you're going the custom icons route this is unlikely to be the only custom thing you'll want. It's going to be much faster and easier for everyone if you learned how to do minor edits like this yourself. If my explanation is confusing, there are much better tutorials here on the forums that explain it.