I need a way of counting how many enemies each actor has actually killed either using physical, magical or certain hit.

I thought I had this because I have a script which uses variables to show this information in the Status window. However, it seems that it just adds them for the Status window alone, and does not add them to the variable, which always remains at zero.

Does anyone know of a script which would do this, or anyone who could write such a thing?

do those values come back as they should, when changing the active character?
if so, then they're definitely being stored somewhere.
you can easily backtrack from the status window's code itself.

@gstv87 Yes, they remain true no matter how often I change who is in the active party.


gstv87 said:
you can easily backtrack from the status window's code itself.
Click to expand...

Whilst this may be true for a theoretical "you", when I am the actual "you" it doesn't apply, as I don't understand the coding.

can you post the block that manages that window?

actually,..... are they saved if you save a game?
if so, find the call to the object managing that being loaded, it should be tied to the DataManager somewhere.

do a broad search of all occurences of "module DataManager", or "extract_save_contents"

@gstv87 Naturally they are saved. They are in the status window in order to give the information to the player. Unless they were saved there would be no point to them.

I did the 2 searches you suggested, but I don't know what to do with the information given.
Here is the result to extract_save_contents 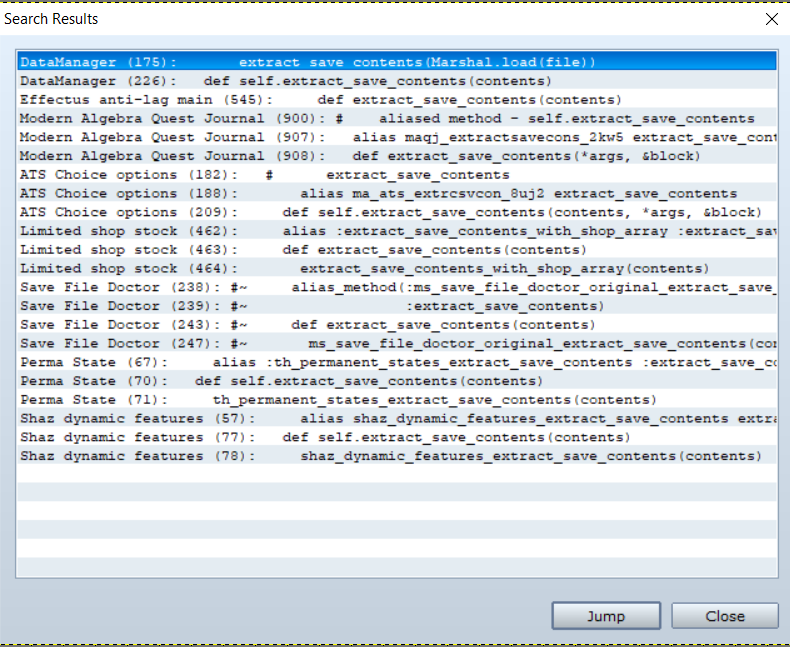 and the other one 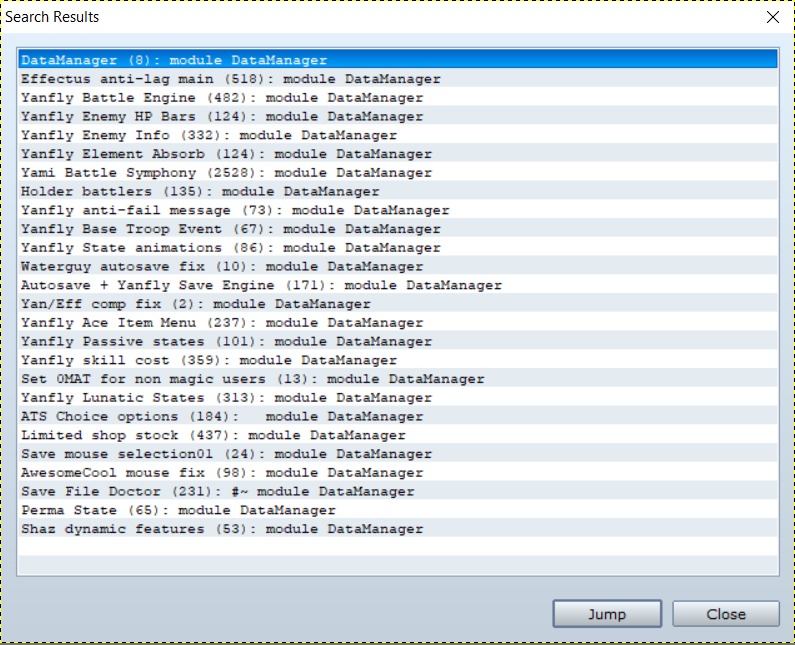 the script that manages the feature in question, doesn't appear?
if so, the feature is tied to the $game_party object, which is saved by the default engine.
try a search for Window_BattleStatus.

if that script appears, find that class in that script, it should have ties to Game_Party, it probably defines a new function.

@gstv87 Nope, not in that list either. All I have is this:

I could give you the coding in a pm, but I can't do a public post of it. Would that help?

sure, send it over.
or, tell me where to find it

Code:
It doesn't display anything, although it does track the kill count for every actor. If you want to display it, you either need an implementation on the window object or just store it in game variables by using script call.

Code:
The limitation would be it wont track an enemy that is killed by DoT.

@TheoAllen I don't need to display the information anywhere, just be able to call up the total stored in the variable.

Sadly, though, the variable did not increase. I created a new variable for this, set up like this: 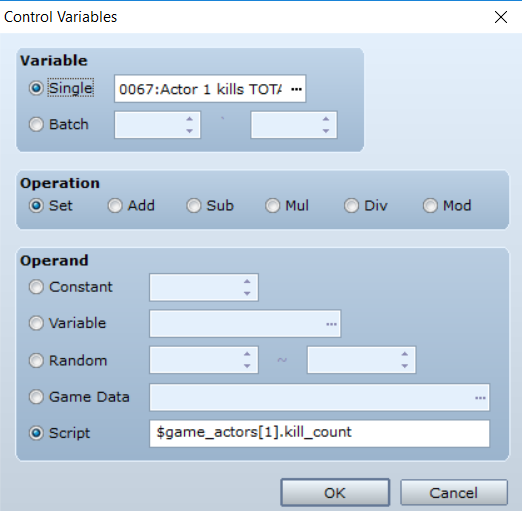 I got the actor to defeat a couple of enemies, but variable #67 stayed at zero, both using an existing save and in a new game. I also tried it with the Operation set to 'Add', just in case, but that didn't work either.

It might because I wasn't using alias. I tried this and it seems to work on my game

Code:
If you're unsure, try to put this below all of your scripts.
If you want to know the live update, add this

Code:
Then use Game > Show Console. It will print 0 at first, and everytime actor 1 managed to kill an enemy, it should increase by one. Or how many enemy had been killed by AoE.

@TheoAllen I must be doing something wrong, because it is still not working.
I tried placing the new version below everything else, and included the bit for the console.

The console indeed showed zeros, but did not update when an actor defeated an enemy. Nor did variable #67 (or #68 for that matter, as the battle had 2 actors in it) increase from zero.

I am trying to set a variable for each of 5 actors which I can call up in common events to calculate various things, so I don't really need a live update, just a variable update.

The live update is sort of debugging tool that you can remove on deployment later, it's really unnecessary code that only useful for tracking.
Can you confirm to me if it works on new project?

@TheoAllen In a totally new game the console display updates to show the number of kills, but the variable which I had set does not. Looking at the screen shot I gave above of how I set the variable, can you see what the problem might be?

Kes said:
@TheoAllen In a totally new game the console display updates to show the number of kills, but the variable which I had set does not. Looking at the screen shot I gave above of how I set the variable, can you see what the problem might be?
Click to expand...

You set up the variable correctly, however it does not auto update. It's same as if you set $game_party.gold on a variable script call, it doesn't change even when the party gold is changed. You need to update it manually.

Now it's your call if you want to update the var manually, or use automatic one.

Code:
This extra code link a certain variable id to kill count so it will be automatically updated. However you have no control over it. If you change the variable value by event, it won't work. The value is totally fixed, and only increased by killing more enemies.

@Kes, do you set the game variable at begining of game, and expect it to track the kill count?
If so, it won't work this way. It will just assume the current kill count value.

@TheoAllen It works perfectly in a vanilla new project, but not at all in my existing one. I therefore assume that another script must be blocking it, even though it is underneath everything else.

Could you suggest what I should do a global search for to see if I can identify which is the culprit script?

@GGZiron This is also the case when I set it for a new game and start a new game on my test map, and if I set it and then do a battle from an existing save file.

Try to global search this

Code:
Edit: or this

Code:
Edit2:
Now to think about it

Kes said:
I thought I had this because I have a script which uses variables to show this information in the Status window. However, it seems that it just adds them for the Status window alone, and does not add them to the variable, which always remains at zero.
Click to expand...

It might because it also has the same issue of being blocked on your game
Last edited: Jun 28, 2018

@TheoAllen
The only other places def execute_damage is found is in the default script, Yanfly's Battle Engine and Yanfly's Lunatic States. I tried disabling Lunatic states, but it made no difference. I can't disable Battle Engine without messing up a whole host of things.

def dead? only appears in the default script.

I have already disabled the other script, just in case, but it has made no difference.

I shan't be able to test this any further for a few hours (RL has its demands).