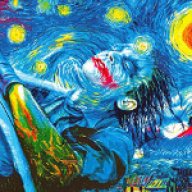 Im currently programming a crafting script where the player needs to place the ingredients into a "pool" and hope to get something useful out of it.


The script seems to be in a good stage, but Im unsatisfied with the scene. The controls feel bad. Im hoping to get some feedback and maybe ideas on how to make it a better experience for the player.


The Script is highly customizable. 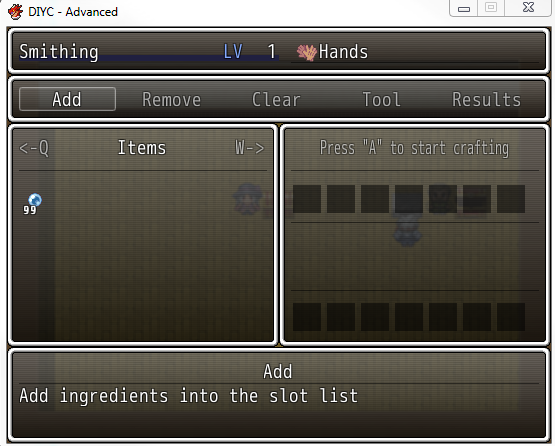 You can find a demo here: http://1drv.ms/1CuXOBw


The raw script can be found here: http://pastebin.com/9cfAu7cN


Im thankful for every response. 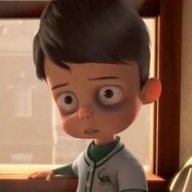 Why this is heavenly, I bet you weren't expecting a reply so soon, buy my God, this looks amazing. Good Luck.

It's a rather impressive script, and personally, I really like the approach you're taking to crafting, where it becomes an activity unto itself (with success/failure chances, and discovery of recipes) instead of just a fetch quest to get X amount of item Y to transform into item Z.  What I like even more is that you can turn off things that you don't want, like Leveling or Tool Use.  Documentation is also above-average, which will be appreciated because it's a complex script as a result of its high flexibility.

I haven't gotten to try it out for myself yet (and might not for a while as my current project is one of those rare fringe cases that has no use for crafting), but upon looking through the setup section of your script, a few questions come to mind:

Also, a few suggestions - again, since I'm just going by a screenshot and 20 minutes of reading through the script's setup, take them with a grain of salt, but maybe I'll hit on something you hadn't considered:

I thought I'd have a look at this via the demo, so that i could see how it is in action.  However, the game won't run as it can't find


ksjp17 said:
I thought I'd have a look at this via the demo, so that i could see how it is in action.  However, the game won't run as it can't find

Did that, however, the demo doesn't fully work as you intend.

You get the items from the chest on the left.  These are bottles and Life Flowers.  However, the NPC wants Life Powders, and without them nothing triggers.

I went into the chest event in the editor and added the Life Powders.  However, they still don't show up in the Inventory (how that can be is beyond me).  so I was unable to test that aspect.

The NPC on the right offers me 3 recipes, but the only way I could find out what they were was to speak to him again.  I think it would be helpful if recipes were easily visible in some form.  Otherwise I can see all sorts of possibilities for player errors.  Fine if the player wants to experiment, but if they are risking their only level 2 axe, they will want to be sure that the crafting isn't going to fail because of a mistake on their part.  Because of the possibility of the crafting failing, I can see a lot of save scumming on this, unless the player happens to have several of the particular item.  In which case, I'm not sure that it's actually worth having a failure rate.  Maybe it is, but I am doubtful that many players will accept the result and most will simply reload and try again.

The crafting interface is quite clunky, there is an awful lot of backing out to get from one action to another.

Wavelength said:
Also, a few suggestions - again, since I'm just going by a screenshot and 20 minutes of reading through the script's setup, take them with a grain of salt, but maybe I'll hit on something you hadn't considered:

Will look into the demo and fix it.

I know that the scene is clunky. This is one of the main reasons for why I have posted the script here.

Thanks everybody for the detailed feedback!

Thanks for your answers!  Most of them sound very good, and I'm happy you're open to the suggestions.

Are you saying that in this scenario (where multiple recipes use the same ingredient list) you might get ALL of them with a single crafting attempt?  To me that seems like an odd way to handle it (ideally I'd expect one of the items to be awarded at random, maybe weighted by base success rate), although maybe I'm thinking about a different use case than you are.


Evgenij said:
Don't quite get what you mean here
Click to expand...

Possible ways to do it would be to have a separate window that is one level "above" the current crafting menu in the hierarchy (much like the main menu and the items menu when you hit ESC/X on the Map Scene) where you choose which type of crafting you want to do, or to allow switching directly from one type of crafting to another by pressing Q/W while on this crafting scene.  Both ways would take zero screen space away from the current crafting scene's layout.

I have updated the script, I changed and added some things you have mentioned (not all) plus some other new features.

/*- Renamed the script to "DIYC-Advanced" to prevent confusion with my old "DIYC" Script- Ingredient slot size is now controllable via a variable- Crafting Types now switchable with L/R (Q/W on Keyboard)- Switched item and ingredient window positions- Removed the start/view results subwindow, now crafting is started via a button and results can be viewed from the general command menu- Updated help window to support commands- Confirmation window to start the crafting added(optional)*/*edit*

Updated the script again. Now you can switch between custom crafting and recipe crafting(only learned recipes) with the button Y (S on Keyboard)

BurningOrca
I was planning to release a useless plugin for april fools, but then I thought I let it be.
58 minutes ago •••

Touchfuzzy
At this point I've gotten so tired of April Fools on the internet that last year I just refused to even post anything on the RMW Social Media on April Fools in protest. Considering doing it again.
Today at 9:51 AM •••