Crafting Script v3.8​
by Venka, based off GubiD's VX Cooking Script​
​
Description:
This is a script will allow you to have a crafting system in your games. It has a crafting timer bar so you must activate it at the right time to successfully make an item. Crafting results vary depending on when you craft your item. You can set up a premature crafted item, for example you can craft some dough instead of bread if you activate too soon, or a burned product if you allow it to go for too long. You can use more then one craft. The demo has Cooking, Smithing, and Alchemy crafts (but you can make your own). Each craft has it's own exp and recipes.

Customization:
- You can customize the colors of the level up gauge and the cooking gauge colors.
- Set of font settings for various parts of the crafting scene.

- You can choose to use line separators to break up the information displayed.

- Set sounds for failure, success, opening the scene.. etc
- Set the sounds that play when crafting as well

- Each crafting type can use it's own music and background image.
- Set the pop up message for after crafting.
- Set the exp requirements for each crafting skill. (For example: Alchemy might take more to level up then Cooking). You can now also turn the exp off and do away with the levels if you wish.
- You can set craft Mastery text that will show in the top of the Scene. (For example after maxing out Cooking, you could be called a "Top Chef")
- Allows a variance to craft times (sometimes it might take a little longer to make a potion)
- You have the option of allowing lower level recipes to craft at a faster rate.

- You can also change the way the crafting gauge works. You can turn it off and always have a successfully crafted item, or turn it on and either have a progress bar that will fill up as you finish crafting your item or set it to an active bar that requires input from the player to make a good item.

- Added the ability to craft stacks of items since this has been requested a few times and I've made custom scripts each time.. figured I'd just make it a feature you can turn on/off.

Fixed a minor equipment counting bug and added the option of setting the claim time by craft type. 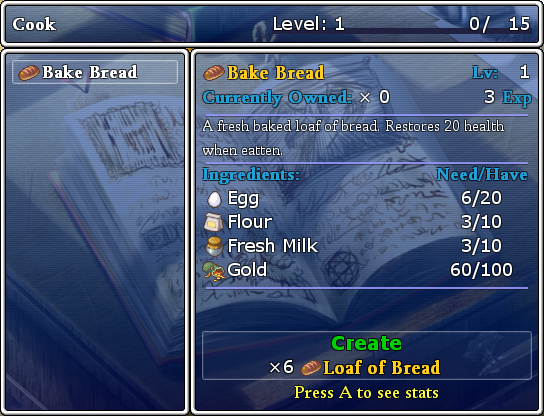 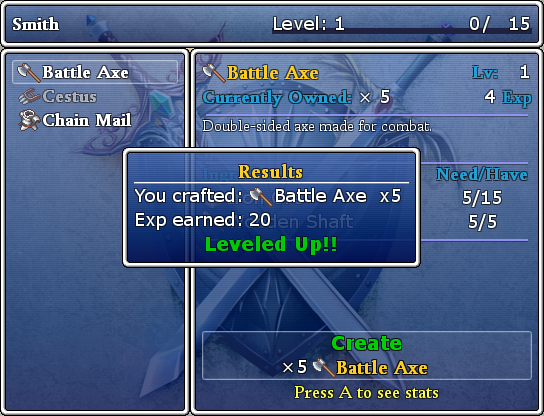 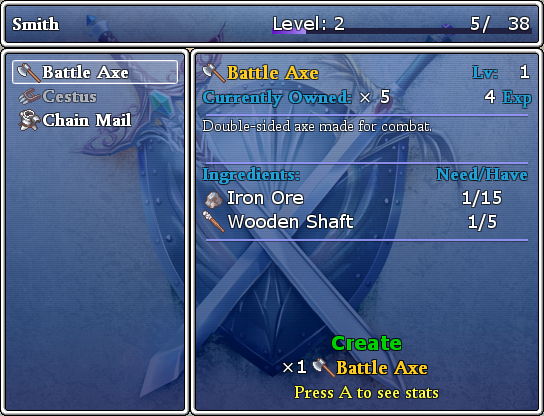 Some of the Add-Ons: 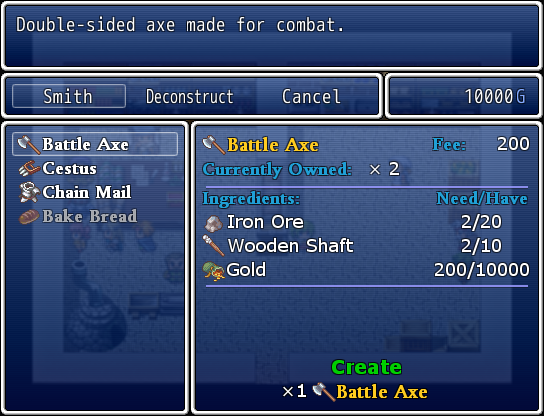 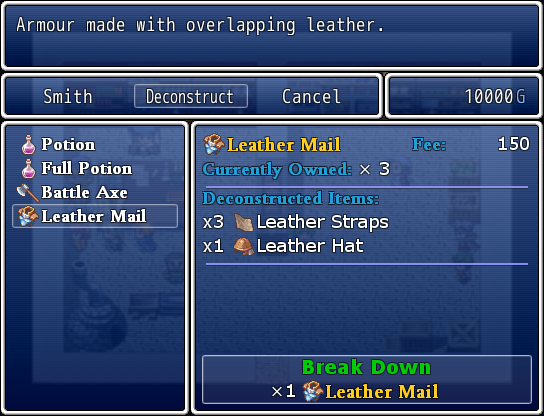 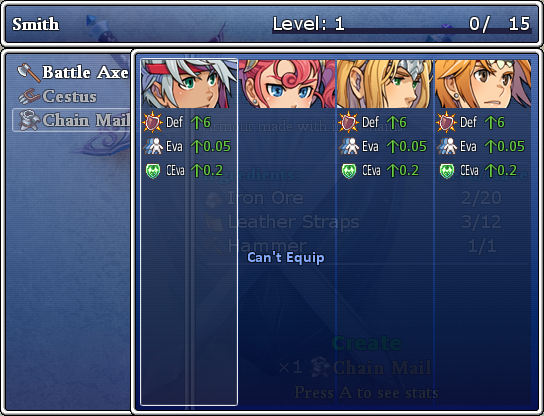 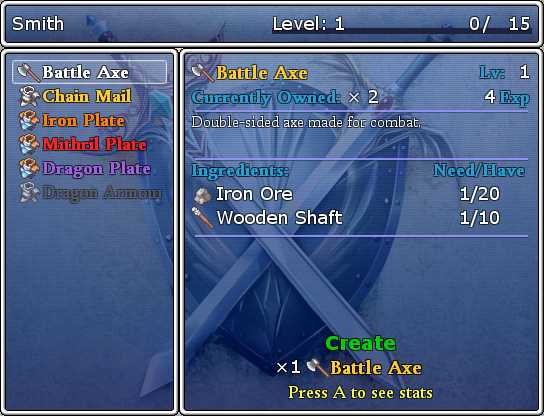 WARNING:
If you are updating to v2.3 from a previous version, you will need to start a new game.

Also the script uses items I added to the database in the demo to demonstrate how the script works. So plugging the script into a completely new project will give errors.

Credits:
Mack for some of the tiles used in the demo

Ying for his wonderful icons used for the fishing stuff
Venka for the updated script.
GubiD for the original script (permission granted to post).

Sixth has a edited version of this script to use with Vlue's Weapon/Armor Randomization Script. You can find the add on here.

Thanks:
posters in this thread of feedback and suggestions

ShadowFox for testing out the scripts before 2.0 release

Usage:
Free to use for whatever purpose you see fit
Yes this means you can use it commercially.

This add on lets you set up difficulty ranks for recipes. You can craft recipes above your current crafting level, but with a chance of failing. You can set the level ranges/tiers and set their fail rate as well as the color of the recipes name in the list window.

This add on allows you to view all your recipes from the main menu. You can not craft from the menu.

The update to this script was to allow large number of crafting types to be displayed without making the text too hard to read.

This add on allows actors or classes to learn recipes apart from the party recipes. Recipes are learned as you level up. Use note tags to set up how each recipe is learned - via crafting level, or class level. You can also set if the actor forgets the recipe when the loose levels.

The last option is how the recipes will show in the list. You can require the actor to be the leader, in the active party, or just a party member (can be in the reserve).

Allows you to buy recipes from a shop npc. You won't be able to buy the recipe or recipe books if the recipes are already known. This will prevent the player from wasting money.

This add on will allow shop keepers that can craft items for you even if you do not know the recipe. They have the option of charging you more supplies and a fee should you hire them. They can also break down items for you in exchange for crafting components.. for a price

Tools Add-on - Outdated as of Crafting v3.0 (it was incorporated into the main script)

This add on will let you list a tool in the required items. Items with <tool> in their note tag box will not be consumed when crafted. Tools can be an item or a weapon.. or an armor if for some reason you can think of armor being a tool...

Allows you to preview stat changes for an item before crafting it. You can craft the item from the preview window for the actor selected. This add on has lots of customizable features and is compatible with the other crafting script add ons and Yanfly's Equipment Engine (extra equipment slots).

Gives you more control over the claim window when using the active crafting option. You can even have equipment that lets you get bigger windows of opportunity.
For more in depth explanation of how to set up new crafts and recipes, check out this post.

Good job. You should change your post title to match your script title though.

Can't believe I didn't catch that bug.  Thanks a ton =)

It's a good thing that I tried to actually press the ok button when I didn't have enough items... XD

can I use it in a commercial project?

It'd be great if you could embed a video demo  into your original post and maybe some instructions for setting it up in a game. I assume this could be used for equipment as well as items.

Yes, you can use it commercially.

To gvduck10: it would acctually take a little bit of modding to use it for weapons or armor, maybe I'll add that in when I get a chance.

is the bug I posted fixed already? 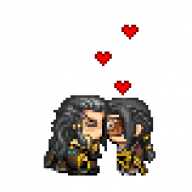 This script is very nice~~ thank you! (^ ^)
and how can I put icons of ingredient into the cookbook ?
sorry for my poor english

your English is fine

the icons should show up by their self.

Hello, is there a way to make it so that when you "cook" something, its automatically used up?

Like, if you cook a "loaf of bread", its instantly used and its effect apply? If cooking a loaf of bread gives 100hp, then when you cook it, everyone gains back 100Hp?

doing a overhaul on the script right now. I'll try to add that feature in for you.

I should probably have it done this evening.

edit: sorry still working out some bugs and frame rate issues. might be ready tomorrow evening.
Last edited by a moderator: Oct 3, 2013

finally finished the overhaul on the script. The new version is posted with new screen shots.

You can have multiple crafts now and use more then just items (items, weapons, and armor can be crafted or used as an ingredient).

Lots of small visual changes: Redid the pop up window, lots of styled fonts that you can set to suit your needs.

Updated the exp customizing section so it doesn't take a ton of entries. You just put in a couple of numbers (like on the Class Tab in the Database) and this will set up how much exp is needed for every level. You can set a max level as well (doesn't support levels over 99).

I'll start working on trying to make items consumable for you now unlock3d. I must admit I'm hitting walls on this one, but I have a few more ways I want to try before admitting defeat. 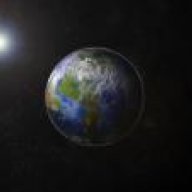 Wow this is really good, I am contemplating dropping my event driven crafting system for this one. 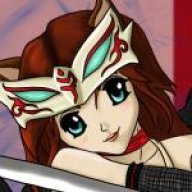 Is it possible to disable the crafting bar so it won't show up in the crafting scene? And of course, make it so that you'll always get a success?

I was also wondering wheter it is possible to set it up so that each time a job levels up, you will automatically see all the recipes of that level.

For example, at level 1 of smithing, you see all the level 1 recipes automatically, then level 2, all level 2 recipes and so on.

I should be able to do that

I'm not the fastest scripter so it might take a couple of days.

Ami
Castle is my Biggest Fear . I just Managed make Part by Part (like the Entrance only),not the Entire Castle like in the RM Sample...
Today at 8:20 PM •••