So I had an interesting idea for a battle mechanic but I'm not sure how to make it happen. It's possible it's beyond me but I thought I should at least ask for help first.

I want a battle system where if more than one party member uses the deafault attack to target the same enemy, they would perform a specific combo-attack instead of their normal attacks. Ideally, the attack would differ depending on who is involved.

Well, the idea is pretty straight forward like that but I imagine the execution could be tricky, especially since I can't program.

That would definitely require a plugin. Furthermore, I would consider that kind of plugin "complex" for any free to use public plugin. It would require:
- Changes to the battle core.
- Specific animations for every combo.
Also, it would make the battle system incompatible with variants like ATB battle system. I suppose if you're aiming for the traditional battle then it doesn't matter much. 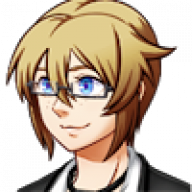 My immediate thought would be simplifying it and using States to figure out who is attacking. Like, A attacks, and puts a (probably hidden) state on the enemy. When B attacks, you could have some javascript code using Yanfly lunatic action sequences that says, like. "If enemy has state X, then force action Y" where Y is a special skill that's the "combo" you are thinking.

MushroomCake28 said:
That would definitely require a plugin. Furthermore, I would consider that kind of plugin "complex" for any free to use public plugin
Click to expand...

Agreed. When an Actor selects an action, it's ultimately added into an array, then the enemies add their actions to the array, and it's sorted in AGI order. You'd have to modify the battle engine to, before executing actions from the array, loop through it and see who's targeting the same enemy. Then you'd have to remove any actions with the same target from the array, then add a new one in.

Additionally, you'd have to figure out the turn order - if a really high AGI Actor targets the same enemy as a really low AGI Actor, but the enemy has a medium level of AGI, then what order do the actions happen? Does the combo come before the enemy's action or after?

Thanks guys. So a plugin is needed, well, I figured as much. I'll go ahead and assume such a plugin doesn't exist, and while it's a cool idea I don't think it's worth paying someone to do a complex plugin for it to work. Even less so if it might spell comparability issues with what I'm already using. But I appreciate everyone's input.

@fallenlorelei
Yeah that's where my thoughts went at first but I think that would be a bit weird and not as intuitive. What can be done without any plugin is not really a team attack/combo attack like I was suggesting but more of a chain-attack, where each actor puts specific states on certain foes which affects all the attacks that comes after. It's actually very different (although, that too can be a fun thing I guess).

Another long term investment would be to learn coding lol. Best way to achieve everything you want and not paying a dime.

@MushroomCake28
True but it’s not for me. I’m already invested into drawing/painting and writing and I can’t keep adding to that plate, else I’ll be so-so at everything. Besides, if I were into coding Iwould probably choose another engine alltogether - maybe game maker?

Oh, and I found this plugin by @Victor Sant :

Not 100% sure it’s up to date (don’t know if he still makes/updates plugins) but if it is, it might be what I was looking for.

If that plugin is what you're looking for, then great!

Made a video with some cool tips and tricks for MV & MZ.
As you watch, I'm curious to know how many tips you already knew.

LunarFlareStudios
Lol. Just got an Apple support scam... is that a thing now? Well, I trolled them good. I played "H.O.L.I.D.A.Y." by The Wiggles and then told them that the supposed victim wasn't at the call center anymore. He was confused so I let it slip that I knew the scam. He hung up on me.
Tired of scammers? Just troll them. They'll run for the hills.
Today at 2:37 AM •••

LunarFlareStudios
I'm going to schedule my shuttle to the train station today... after I vote. It's not a pleasant thing to do, since I hate politics. So much negative talk. I can see why it's not allowed here. But about the shuttle. My county has a service called PalmTran, and it's really convenient. They pick you up at your home and drop you off where you need to be. Just give them a date and time.
Today at 12:11 AM •••

ramza
Titlescreen idle movie player, play some videos if the player sits on the titlescreen too long! [free plugin]

Play a video on your title screen