Tutorial Title:
Creating the Framework for an Adventure/RPG Hybrid in RPG Maker MZ

Brief description:
Follow along as we learn to create the components for building an adventure/RPG hybrid that will behave visibly similar to the classic Legend of Zelda but with Dragon Warrior style combat and Final Fantasy style story progression.

Requirements:
GIMP (Starting in Lesson 3)
No plugins yet, but may incorporate some further into the series

This tutorial series is in video form. The full playlist as it has come so far is posted here. Below it, links to the individual videos are provided. I'll be updating the links as I post new lessons.

This series is meant to be viewed in order and in its entirety, as each lesson builds upon what came before. I do not usually recap what I demonstrate, so please be sure you haven't missed anything.

For the first four lessons, I've been building things as we go, so in essence, you the audience and I are on exactly the same page in terms of development. Beginning with Lesson 5, which I am working on now, you will start seeing things that may be several steps ahead of what the lesson is covering. This will not prevent me from detailing the steps involved as we come to them in the lessons, but I fgeel that those who are participating in this tutorial series are becoming familiar enough with the General workflow that they should be able to follow along with me just pointing out the elements in question and explaining the steps rather than needing to see everything being built procedurally.

So What made me want to jump ahead? As mentioned, I intend to use the framework we are building together to create my own series of adventures. So I want to be able to get into that process as soon as possible so I can begin releasing playable content as soon as possible. It's one thing to be able to playtest the different stages of the framework. It will be quite another when actual playable projects become available to see things applied in practical application, with plenty of stuff that will show what is yet to be covered in the tutorials series.

So what is next? In GIMP, I will be teaching use of layers for the purpose of easily modifying the colors for the Full Gray Rock tile group. This will allow quick and easy creation of game-ready assets with whatever color model we need. After this, we will cover tree tiles, which will be a little more complex as we will want to handle the tree trunk and tree top elements individually, with the ability to turn them on and off in GIMP and independently set their colors. IF we want a tree with red leaves and a grayish-purple trunk, we'll have it set up to do it. Want trees with just a slight touch of brown in the leaves? That will be easy as well. Want dark blood-red rock tiles? easy.

By following along with this series, you'll know exactly how to achieve these results before importing custom tile groups into the final version of your tilesets.

After we do the trees, I will cover a method for doing the dungeon screens so they look similar to how they do in classic Zelda, again using MZ's art resources as a base.

After that, we won't be spending as much time in Gimp and will be getting back to event creation in MZ itself. That will include how to make items you can pick up by walking over them, a Zelda-like inventory screen where you'll be able to select objects that will have an effect on what happens when you interact with things in the world. For example, using a pickaxe on a rock tile to attempt to mine it will ultimately require that the pickaxe be selected as the active special item.

A consequence of the process is that the tile group placement in our custom tileset is going to change and its pattern will carry forward with trees and other tile groups. Like I said, once I cover trees and interior maps, we'llbe spending a lot less time in Gimp and we will start diving into more mechanics for the framework. We'll revisit Gimp whenever we need to make something that ties directly to a mechanic I'm covering.

And now I will leave you all with a screen shot of the tileset as it will be at the end of Lesson 5. 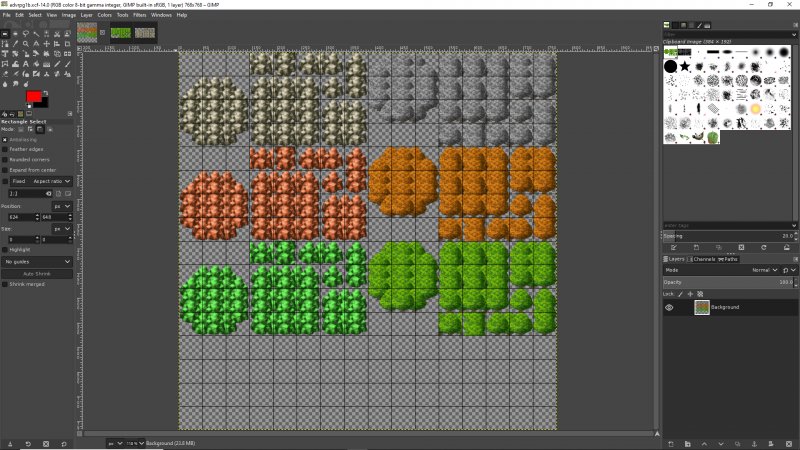 It should be noted that an actual tileset to be used in actual gameplay will not actually have all rocks and trees, but would actually just have maybe one tree group, one rock group, a smattering of ground surface materials, and several objects not in the MZ library by default, like this Dragon Monument that I will teach how to make in a later lesson: 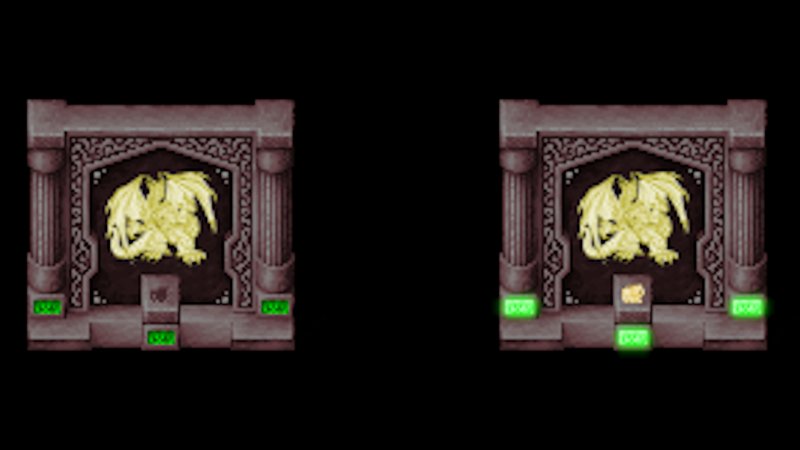 Lesson 5 has been uploaded:


​
It was originally my intent to cover the tree tile group in this lesson as well, But I decided to focus on that for the first part of Lesson 6 and then spend the rest of it actually laying out a few overworld screens.

I do not anticipate Lesson 6 to be very long as it will be expanding on concepts already covered and I intend to wrap up the GIMP-centric stuff and get back to working directly with MZ.

We'll be spending some short lessons setting up events that will facilitate the player's ability to find secrets, as well as walk-over item pickup. Not sure how many lessons that will be. One per event.

Thank you all for your patience.

If you have ideas for secrets the player can uncover, post them here, and I'll see if I can work them into the series, if they aren't already on my list.

If you have any questions about the series in general,please ask. This is the officicial tutorial forum for MZ, so I will be happy to respond to any questions even if I already covered the details. I just won't be doing that in the comments for the videos on YouTube.

It is my hope that when all is said and done, at least a few people in this community will have followed along and use the framework we are building together to produce and release their own Adventure / RPG hybrid games, as I will be, and we can all cross-promote each other's work, maybe even growing a wider interest.

Lesson 6 has been uploaded:

Lesson 7 is going to be called "It's Dangerous to Go Alone..." and will cover the event scripting needed to start off a game in the spirit of the classic Legend of Zelda. We won't be using the title phrase in the actual gameplay. We're not aiming to duplicate Zelda itself, just the style and approach used. The actual on-screen message will be "You won't get very far without this..."

And the old hermit who says it will be right, because the exits from the start screen will be blocked by
bushes, which the sword will let you chop down...

Basically, The pop-up message will pop up whenever the player enters the hermit's cave but does not have the old sword. The player will be able to take the sword by walking over it. Talking directly to the hermit will produce different dialogue, so there will be before and after handling of getting the sword. And most important of all will be that the player will now have access to the four adjacent screens and can continue their journey.

I'm working on the lesson now and I will post again when it's up.

If anyone has any questions, please ask and I will address them at the beginning of the video.

I attempted to upload Lesson 7 overnight last night, but a Windows Update came through and caused the upload to hang at 72%. After waiting an hour with it not advancing, I canceled the upload and I just started again. It is should be live in the next 2 hours

I hate my internet connection. Too bad I have no other viable options where I live.

Anyway, I'll update the links and post again when it's done uploading...

I am working on Lesson 8, which I plan to post today. It's going to be a short one, but it is the first lesson covering how to hide secrets and create tools the player can use to find them

I'd like your feedback. While I plan to offer counterparts in MZ to the secret-hiding and finding of Legend of Zelda, I want to entertain community ideas for others. So if you have an idea of how to hide secret entrances or important items, share your thoughts here, and I'll look into including them in future lessons.

EDIT - Lesson 8 will be posted tomorrow. I had some internet issues today, and a meeting to attend. But I am wide open tomorrow, so I'll be finishing it up and getting it out there.

Have a great day/evening wherever you may be.
Last edited: Dec 5, 2020

Phase 1 - Step by step screenshots of lesson activities. This results in the "slideshow" form of visual presentation you see in the actual finished video. The script for my narrative monologue is written at the
same time. This is typically the longest stage of the process as I test what I am doing to make sure it works as intended. I use GIMP to add red highlights to the images to make sure attention is drawn to relevant elements on the screen.

Phase 2 - In Audacity, I record the monologue as an MP3 file

Phase 3 - In VEGAS Movie Studio Platinum, I lay down the monologue track, and place the images where they need, applying visual effects like crossfading and screen swapping. This is the most tedious part of the process.

Phase 4 - Video is rendered and reviewed to make sure there are no glitches in audio or visual aspects.

Phase 5 - Video is uploaded to YouTube and added to the series playlist.

Phase 6 - The thread here is updated to reflect release. Posts are made to the RPG Maker Web facebook page and my own game def vacebook page.

I had a bunch of personal junk to deal with so Lesson 9 has been delayed. Barring any other issues, I will try to have it up on 12/21

LESSON 9 PROGRESS REPORT
Well, the weekend proved to be fruitless. Had some more stuff that required too much of my attention to be able to get anything done here. So rather than releasing today, I'm just getting started. Will keep this post updated as to progress.