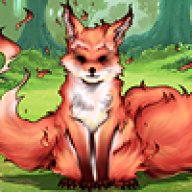 Heyo, I don't know if I've ever actually used the forums before, so sorry in advance if this is posted in the wrong place or not allowed. My pack, "Creatures: Woodland Animals" just went up on the store, and if it sells well, I'd like to do more animal/creature packs for RPGMaker - I was thinking specifically starting with either domestic/farm animals or jungle/wild animals... I'm just wondering what it's like out there for other gamemakers; if there's a want for more animals, and if so, which ones? I'm also capable of drawing battlers for them, but I didn't this time as I figured it'd be more work than the payoff, since most people probably wouldn't, say, want to put a battle with a chipmunk in their game. But I don't know. Just putting the feelers out there for what, if anything, is wanted in the critter realm~

Really hard call on where to put this topic. I'm going to move it to General Discussion based on the idea that you want to know what kinds of resources people plan to use in their game development if they're available. (Other Mods: Feel free to re-move if you have a strong feeling this belongs elsewhere.)

I've never had much of a need for lots of animals in my own projects since I tend to make games in modern suburban/urban settings. Obviously I'm not the norm in that regard, but it means I can't give you great advice on what I'm looking for as a potential customer. One thing I do want to mention, though, is that quite a few people are making games in the vein of Harvest Moon or Stardew Valley. It's a very popular subgenre of RPG within the RPGM community.

Thank you for the input! Those games did come to mind, and the RTP has some cute farm options but is limited. Was thinking of adding some more cows, pigs, goats, llamas, etc...

To throw in my two cents :

I would personally like to see more different dog breeds when it comes to pets and maybe acaged bird or two but thats the extent of my need for domesticated animals.

Now for wild animals I would live to see some more exotic creatures like leopords, camels, eleohants, rhinos, hippos, etc.

But these can also be found for free if one searches hard enough...

What I have a very hard time finding though are aquatuc animals : dolphins, walrusses , seals, sharks, octopi, even starfish...
How wanted they are... I dunno.

Thanks for it! I did actually think of doing different dog and cat breeds, but wasn't sure if anyone cared about that. Same with "exotic" animals; I was originally going to put civets and lemurs and pangolins and such in the woodland pack but ran out of steam and figured I should first test if anyone wants animals. The rest would all be on the list for "wild" ones... I hadn't even considered aquatic animals though. : o That could certainly be interesting, although I don't know how well they'd do since I don't think there are any official full underwater tilesets on the store... (I could also do that, except I don't want to make the people sprites and there are no official swimming sprites as far as I know...) But yeah, knowing they're out there for free makes me think I should definitely wait and see if the current set sells at all before doing anymore. But thank you, those ideas are interesting!

yeaka said:
I don't know how well they'd do since I don't think there are any official full underwater tilesets on the store.
Click to expand...

Yeah that's true, though that is also one of the problems I think with a lot of the dlc packs that are out there - no matter how good some of them are - they all cover the same bases most of the time.

Personally I like a good forest and nice town in my game but how many different tiles do I really need for that that are all pretty much the same?

I for one would love to see more diversity even in the more basic stuff - good basic desert tiles, pirate cove theme, arabic and african inspired tiles... (i could continue but this is derailing enough lol) These are all pretty much lacking and would be cause for me to open my wallet (if they fit the RTP or the more popular dlcs out there ofcourse).

But yeah, waiting for sales numbers prolly is smart (though I wont be buying this particular pack for the reasons I stated). I do like the look of the pack though xD

No worries, the input's still helpful! You're totally right about the repeat themes. Honestly I would've just focused on the animals, but was told the forest tileset would help; frankly I wouldn't even use my own trees, lol. Now you've got me spiraling in a completely different direction, wondering if I should just make a whole underwater set. XD Maybe I could just hope people would be fine playing as dolphins rather than humans, or make a generic space suit to go over any walking sprite to avoid having to do swimming ones, haha. 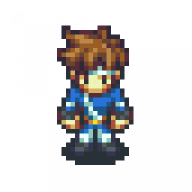 Can you let me know how many pixels high your horse is? I need to know your animals fit my scale.

Benny Jackdaw
At this point, "unique and diverse cast of characters" might as well be slang for Every Character is a Human-Sue.
Today at 9:36 PM •••