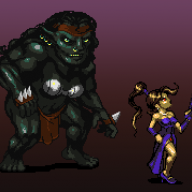 Omaj is a group of individuals that defy expectations by presenting captivating visual stories that open the imagination and inspire critical thinking.

Join the retro JRPG revival movement with Darkblood Chronicles, the story about a young woman named Samantha. Her adventure begins with a strange foreboding nightmare, wherein she sees herself atop a guillotine with a hooded man standing above her, axe at the ready. She is startled awake as the axe comes down, but it seems to be just her dad, knocking at her bedroom door.

It is early in the morning, though the sky is still as dark as night, and rains pours with ferocity. Sam arrives at school only to find that the power is off and the road back home has mysteriously vanished. Meeting up with an acquaintance of hers, Ethan, they are led around the school by a shadowy figure. They corner the figure, which turns out to be a quiet and mysterious girl named Sin, and realize she was manipulating them into following her all along.

What comes next is the culmination of the strange occurrences that happened since the morning's wake. With the flick of her wrist, Sin opens a vortex to the dark realm, dragging Samantha and Ethan with her. In the journey that follows, Sam hopes to learn why she has been dragged into the dark realm, and the mysterious circumstances surrounding a tragedy that occurred two years prior.

Unravel the mystery, and face your darkest fears in Darkblood Chronicles.

• Survival horror RPG, featuring a dark, mature and complex story.
• Dialogue choices that determine one of five possible endings.
• No random encounters. Explore and solve puzzles at your own convenience.
• Active-time battle system reminiscent of old-school JRPGs.
• Imbue Samantha with over 40 unique skills to create your own unique play style.
• 3 fully fleshed out main characters and over 40 playable support characters.
• Over 20 hours of gripping and addictive game play.

I've moved this to Commercial Game Releases for you.

very nice graphic work.
ps: I recognize some after effect template in your intro, (the circle)
I had also used it several years ago in a video introduction.

Good luck to you with you project.

Thanks for the input Jonforum! The intro video was commissioned, so I figure the video maker had used after effects

Storyteller-Hero
Big Google Warning Today for chrome users - apparently some kind of security threat has happened and everyone is being advised to update their Chrome browser ASAP by going to settings and/or "About Google Chrome", to update their browser version to a new one just released.
16 minutes ago •••