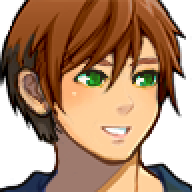 Daydreamer is an adventure RPG game about a teenager who finds himself victim of nightmares and bad dreams quite often! The day of the annual carnival in the town, he meets a childhood friend who is now a profesional archeolgist. She drags him into an abandoned cave and asks him to help her with her latest archaeological research on the place. Then the adventure unfolds and he finally finds something really unexpected...

The demo contains:However, the demo doesn't spoil much of the main story and let's the player find out what's coming next.

The main character of the game is a teenager who becomes victim of nightmares, which haunt his everyday life. A kind and honest boy who lives with his mother in a little house by the woods. The game finds himself trying to overcome his problems.

The mother of the protagonist. She lives a hard-working life with her son, who is the most precious person in the world for her. While her son is witnessing grave nightmares, she is unaware of the fact that they are going to change the future of the young man.

Lyla is a proffecional archaeologist, travelling the world to find undiscovered places and ancient findings. She has been a childhood friend with Nicolas. She desided to follow her dreams and leave everything else behind for a new beggining. She is an intuitive and beautiful girl, searching for adventures wherever she goes. In the game, she suddenly meets with her old friend and asks him for his help.

​
​
​
​
Here is a couple of links for the demo profile:   www.desura.com/games/daydreamer

So I went and tried out Daydreamer. You can find my Let's Play over at http://forums.rpgmakerweb.com/index.php?/topic/25194-zevias-lets-play/

I honestly really enjoyed it, and I'm going to leave my review in a spoiler tag here because, seriously, spoilers. I really think the charm of the game is going to come in just experiencing it for yourself and not having someone else tell you anything about it - ANYTHING. As I mention in my review, if you liked Limbo (a Steam game), or any of the old Sierra games like King's Quest, you'll like Daydreamer. If I tell you any more than that, I think I might be robbing you of a really fun experience.

Review for Daydreamer (spoilers, for real)


Daydreamer starts out very similar to Chrono Trigger, which I only mention because it occurred to me quite strongly. While the game actually opens up in a dream sequence, a young man then wakes up in bed, is greeted by his mom, and is reminded to go visit the carnival. That's where the similarity stops, but I felt it was worth mentioning.

Anyway, onto the actual game and not my silly digressions - Daydreamer is the story of a young man named whatever you want to call him, but Nicolas or Nick, since that's the default game, is what I ended up going with. After I died 3 times from falling boulders in an abandoned cottage, Nick met a friend named either Lyla, Lily, or Lili at the carnival. Her name when she spoke was Lyla, but Nick kept referring to her as Lily, so I'm not really sure which it's supposed to be. Lyla is an archaeologist who's back in town for the carnival, and she wants to show Nick an abandoned mineshaft she discovered outside of town.

The rest of the demo is basically puzzle-solving trying to figure out how to get deeper into the mine. Also, you die. A lot. From just about everything you can interact with. Hey, a suit of armor! Dead. Hey, a skeleton. I walked out of the room and came back. Dead. Hey, a leather bag. Dead.

Now, if you ever happened to play any of the old Sierra quest games - King's Quest or Quest For Glory or something - you're probably familiar with this kind of gameplay. This is a style of game that really caters to the people who enjoy trial and error, and the almost comical repetition of being killed by every damn thing you come into contact with. If you don't like going back and trying things again, you will feel frustrated, but I expect a lot of people who played the old DOS puzzle games are going to get a real kick out of this, because it's the sort of game you just don't see any more.

Another parallel it draws to the older puzzle games is the difficulty and somewhat obscure nature of the clues to the puzzles. Rest assured, there is no hand-holding, quest journal, or any instruction on what you're supposed to do to solve each area - this is a game that the explorers want to play, the people who want to fiddle with everything and figure out how it works (while dying over and over).

I'd really like to give you an example of what I mean, but frankly, I think you'll enjoy it a lot more if you just give the game a try yourself. This is a game that would've fit right into the era where the word "walkthrough" was akin to blasphemy. I think the RM community would really enjoy it. I will only mention one little hint - if you're American, don't forget that the rest of the world writes their dates as day/month, not month/day.

The music in the game is beautiful. I really like the first piano notes of the title screen, and pretty much every other piece of music that happens - although the town music is a wee bit on the loud side compared to the rest of the game's tracks. Of course, the game also knows when it's better not to have music - the soundscape of dripping water in a cave when exploring the mine and trying to figure out its puzzles really lends to a much better atmosphere than a musical track probably would have. The only music is just an ambient track, which lends nicely to the area.

The environments and backgrounds are all pretty beautiful, actually - I'm really surprised that no feedback has been left for this game given how detailed a lot of the maps are. The only quibble I have with it is that the sunshafts are not stuck to the map, they move around with the screen. It looks really unnatural and is actually distracting at times.

Actually, I thought the demo was ultimately pretty well-polished, with one major flaw - there's a litany of language errors scattered throughout. My favorites were "a bookshelf crapped full of books" and "a bottle of whine." I saw that DrInferno listed Greek as a first language, however, so I really don't mind letting spelling errors and such slide - none of them were so egregious that I couldn't enjoy the game. Perhaps before a final product is released, bringing on-board an editor to clean up the text would be a great boon.

The only other annoyance was that so many of the objects that you can examine are very "exactly what it says on the tin." What I mean is, you can walk up to a mirror on a drawer, and when you examine it, you get the message, "It's a mirror on a drawer." Or a toilet gets, "A toilet." A pot of flowers gets, "It's a pot of flowers." I think making everything interactable in a puzzle/adventure game is a good idea, because it teaches the player that you might be able to find clues anywhere in the environment - but after so many objects gave me no useful, interesting, or important information, I started to feel like I should stop examining everything and instead just try and figure out what's important by what its graphic was.

All in all, though, I really liked the demo. It took me about an hour to do my first time through, though as with all puzzle games, once you know what to do, it could probably be accomplished in much less time. It's a really charming throwback to the "difficulty" and style of older exploration games, and I can think of at least one person on here I plan to message to see if she'll give it a go, too. If you happened to play Limbo, on Steam, I think you'll have an idea of the kind of game Daydreamer is.

Really looking forward to more of the game being released so I can get killed a thousand more ways while trying to wrap my head around some pretty cryptic clues.
Last edited by a moderator: Apr 20, 2014

I'll write comments as I play through the demo.

-The blocky chat font clashes with the graphics.

-That dream represents fairly well what I tend to dream from time to time...

-The sunrays are a little obnoxious.

-Suffering framerate drops on the town map too.

-Finally, a game that doesn't let the character read signposts when not facing the frontside.

-Not sure where to go now. Character says I have to go to my mum first, but she's nowhere.

-What? Why is the cottage door now giving me an option to smash the door? It didn't have that before... Would be nice if it gave a hint that the option was changed.

-Instant Game Over out of nowhere? That's uncool.

Instant Game Over out of nowhere totally ruined it for me. I'm thinking it might be a glitch, because I can't honestly believe anyone would think that was a good idea to put in the game. Why are there boulders appearing out of thin air as soon as I step left or right? Why does there need to be a Game Over, wouldn't a teleport back to start of area suffice? It's just a waste of the player's time. I'm so confused about this being in the game...

Other than that it seemed like a pretty interesting game. Obviously a lot of work put in the presentation. The mapping looks nice. Music fits the scenes. Sound effects aren't annoying. Almost everything being examinable is nice. Not really a fan of the blocky font, but I guess it's OK. Noticed a few typos here and there, would be a good idea to get someone to check for those so you can fix them some time. The game could really do with an auto-dash option, as your maps aren't exactly that small.

Another complaint I have is with the logic my character is using on where to go. The character says to himself to look for his mum before going to the town. But he's OK with bothering breaking in an old shack? Also, the option for smashing the door isn't very obvious, because getting it to change requires to select the option at the bottom. So if the player checks the options from top to bottom, he will check the Open Door option as last. There is little sense in checking again, since there's no hint anything has changed after doing so.