Madness Fantasy DEMO is now available! Check THIS link to try it for free!

Here is the game trailer!


Madness Fantasy is the game I just develop for rpgmaker2003, it tooks many years to complete it, thank you to everyone who will try the demo!

The gameplay is gta-oriented, which means there's a city map to explore, and you'll have to take on some missions given by the boss Ivan which will lead you to many surreal adventures. You'll be allowed to steal vehicles and go everywhere you like. The gameplay is very diversified from one mission to another, and the game situations will change very often. Besides there will be a lot of secondary quests and many mini games.


Vehicles: The whole Oddcity is full of vehicles ready to be used (better, borrowed). You will find cars and motorcycles of any kind, and also some other special means of transport...

GPS/Compass: Jackie's navigator will allow you to have your position and your objectives under control in the game map anytime.

Menu: menu helps you with info, statistics, cheats and bonuses, or just with options.

Chapters: the game presents 27 chapters for the main quest

Secondary quests: In Oddcity you might find some people with a lot of problems, help them solve them in order to get some special stuff!

Story/Open: Basically you play in Story mode, where you cannot always do some other quests or minigames and where climate and day/night cycle are fixed due to the precise story situations of the moment. But, if you want, with the menu you can switch to Free mode, immediately climate and day/night cycle will go randomly and you will be able to do whatever you want without any limit! You can switch both modes when you want in any moment of the game.

Madness Fantasy world is vaste and ready to be explored, full of many different ambiances. Oddcity is the town where our heroes' adventure takes place and it presents different settings: the congested city full of bars and clubs, the countryside with its animals and farmhouses, the mountain with nature and misteries, the forest and its paths and adventurers, and the desert, with its dry and abandoned lands.

Jackie, Max, Marv, Hank and Dex are five inseparable friends. As life goes on boring, they decide to spend one crazy weekend in one of the most exclusive clubs of the country, the Oddcity Disco. During the night out Hank meets a guy and there come the problems. There's a police raid and our heroes are taken to the police station and forced to work undercover to be able to infiltrate the Big I, the gangster organization that rules the town. Then a life changing adventure begins, making them face unexpected situations and troubles.

The game presents a very precise plot, rich in dialogues and funny situations, but also some serious and deeper moments. It's a so-called journey, a total immersion in the characters' adventure, a long lasting emotion which will show you all the characters' different aspects and make you live unforgettable experiences!

Madness Fantasy's soundtrack was created by Alessandro Talora. It is composed of 62 original and unreleased songs. They will accompany all the situations in the game and emphasize the atmosphere of the moment. Here is a little preview!

The game will be available in English and Italian. 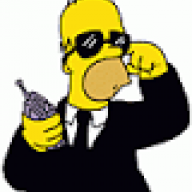 Very nice graphics, mechanics, i really like this ! music are in MIDI protocol or you use VST plugins ?( "soundfonts' and generics). Congratulations ! very nice job !

Thank you, lord_damios Music are high quality mp3 and are 62 original tracks all made by Talo, my collaborator for this project. I'm not sure what protocol they use, I will ask him XD Even though I'm not quite a fan of the retro graphics, I'm getting this inkling that this will be worth it.

Thank you, Ace VII ^-^
I hope to release the game this fall, if everything is going to be ok ^^'

Here we have one new screenshot! Here is where it all begins... are you curious about how these five guys will going to mess their life? Here we go! Please help me to reach the goal and make Madness Fantasy join the world! ^-^

I have more updates for this project, here are some new screenshots! Hello everybody!
It's been a long time since the last update, but I kept concentrated on the game development. The game is almost done, just some little fix to the graphics and a lot of testing to do, but it's almost ready for the release hopefully this fall. It will be available at launch in Italian and English

Here you are the first gameplay video ever, hope you will enjoy it ^-^

New update with some fresh screenshots!

New screenshot today! This is Jackie outside the city's egyptian museum! What do you think about? Here you are the new story trailer! Enjoy!

This is the main city map view from the editor, the map is 460x448 tiles large and while playing you can steal vehicles as gta to go through the whole map This game look very well made, i can feel your passion by looking at it.
Maybe Rm2003 is different, because if it was VXace or MV, a 460x448 map
will make most of computer explode! (maybe not exploding, but game's performance
will be drop like crazy for such a big map)

Madness Fantasy DEMO is now available! Check THIS link to try it for free!

Here is the game trailer!


It tooks many years to complete it, thank you to everyone who will try the demo!

This game looks very fun to discover! I'll try to find the time to play the demo. Congrats! I would like to play it. However, the first time my antivirus considered the .exe as dangerous and removed it. Now the link is down.