Speaking of multiple bosses, I can not tell much as most of the bosses I know only have one you should focus on. Maybe, the boss has multiple parts but most of the time I encountered such type of bosses in real-time games like a top-down shooter or action RPG, rarely I've seen in turn-based battle.

But here is my experience of actually making them.
It. sucks.

The main problem with having multiple bosses is, when one of them dies, another one becomes a slog. You're already winning the battle, the DPS value of the boss is already dropped significantly if the boss is not doing anything different. Now one could argue that if you kill one of the two, three, or more bosses. The others get buff. While that could do, in my opinion, it's too cheap.

Even with that, I still want to have multiple enemies/bosses in a boss battle, here is how I attempt to fix the issues.

@TheoAllen
Yes, as soon as you focus fire one the others kinda get weaker and lose the challenge. Kinda makes some sense, as they are like a reflection of you having a party and you losing a member is also weakened a lot, but still.

A buff when one falls is not good enough.

My suggestion is to give them an evolution on their pattern.
After one falls the others not only become stronger in stats like a buff, but change their battle tactics, as if a new phase in the boss battle.
So you'll have to think "is it worth it to focus fire, or would it be better to spread out the damage, suffering more per turn but less after they start falling?"

Basically instead of just diving phases per damage or time, also adding the living of enemy members to the mix.

And about the "Main Target and Persona/Stand", in the Persona 4 fighting games a Persona can be damaged. Damage them enough and they break, taking some time to return. Similar to the final phase on the Lavos fight in CT, where each of the other two parts is there mostly to protect and boost the main one but return if destroyed after some time, not saying more because spoilers, it is a surprise figuring it out when you first meet it and is a game very worthy of playing.

YoraeRasante said:
My suggestion is to give them an evolution on their pattern.
After one falls the others not only become stronger in stats like a buff, but change their battle tactics, as if a new phase in the boss battle.
So you'll have to think "is it worth it to focus fire, or would it be better to spread out the damage, suffering more per turn but less after they start falling?"
Click to expand...

If you're not too lazy to do this then sure do it. This doesn't sound bad.
But as a dev, personally, thinking that the player would only experience one of the possible outcomes (the boss A boosted if B died, or the boss B boosted if A died, or both die together) would just waste of time.


YoraeRasante said:
Similar to the final phase on the Lavos fight in CT, where each of the other two parts is there mostly to protect and boost the main one but return if destroyed after some time,
Click to expand...

I don't play CT so this sounds like a good idea. Let me write it in my possible boss pattern to try and thank you for mentioning this.

it's not that big a work if you make the phase change just be when there are only 3 instead of 4 enemies for example, and if x one was dead at that point then y can use z now but not if x is still alive

It's not a big work, probably, but still a "waste of time".
I crafted my enemy so it does look good and as good as the actor and I spend a fair amount of time on it to make sure it looks good. I use sideview battle after all. The thought of some players may not encounter the same experience or at least see my craft just bothers me. At this point, it goes personal and off-topic. So I'll just stop.

Ah, personal taste then as a developer and not as a player. Fair enough. 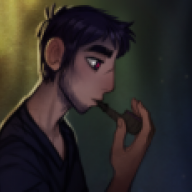 I like to make each boss Battle as memorable as possible by using one single and simple rule:

each boss is a gimmick

There are, of course statwise elements that should be considered to make the battle as fair and challenging as possible, but the jest is to create unusual scenarios that require some thinking to be surpassed.

There's a boss in my game that has only 100 hit points, which is a very low value in my game, specially midgame. The jest is; every hit it takes is reduced to 1.

"Does it means that 100 hits are needed to beat it?" Not exactly.
This boss uses special abilities that consume it's own hit points to be used. These abilities are very strong and dangerous, but usually cost 3,5 or even 7 hit points. And each of it's abilities are used in certain conditions, like "Retribution", that applies to all the group each of the states (negative AND positive) it has been taken. Have you poisoned this boss? He's gonna poison all your party in the next turn. The good thing is, this ability costs 5 hit points, and this boss is FORCED to use it as soon as it takes a negative state.
You must log in or register to reply here.
Share:
Facebook Twitter Reddit Pinterest Tumblr WhatsApp Email Share Link

Rabosion
Today's my first login since Jan 2020. Time sure flies. Sorry to everyone's messages i missed.
Today at 6:05 PM •••