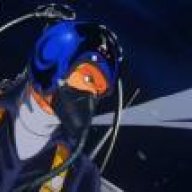 
Last week when I started experimenting with creating my own character portraits I created a thread and just added a new face when I completed it, but I ended up drawing far more than I originally thought I would, so I figured it'd be best to create a new topic that I update regularly as I come out with new assets.


A little background: I'm working on my first RPG, and originally I thought I'd try and replace as many assets as possible, including tilesets, battlers, etc. It soon became clear that it would take me a very long time to do that on my own, and I decided that simply making my own character faces would be a good enough compromise - it would personalize all the characters in my game and make them unique, and hopefully that would be enough for players to overlook the fact that most of the other assets were standard RTP fare (though I also plan to replace the RTP music with commercial-friendly third party works).


And now a disclaimer: I'm not an artist, or at least I don't consider myself one. My faces are far from commercial quality, and I've mostly been banking on them looking decent enough when reduced to 96x96 pixels. That said, I can see slight improvement over time. All said, I'm mostly aiming for consistency.


Here's my first batch. Some of these characters are party members, while others are only in a single scene, are antagonists, or supporting NPCs. More to come with time, and the characters and their backgrounds will no doubt see some revisions as game development progresses. Read from left to right, top to bottom:


1. Trent Denja - A guardsman for House Sterling, young, devout, and true to his House, if somewhat lacking worldly experience. As a guardsman he is afforded a modest but livable stipend from the House he serves, and his family is afforded basic necessities to live. Trent doesn't become distracted by the internal politics of the realm or any infighting between houses. He wakes up, dons his armor, and attends to his duties under the command of the captain of House Sterling's guard.


2. Blake - A fellow guardsman the same age as Trent, who trained with him and earned his sword in the same class. They have been friends since, and shared many duties together. Unlike Trent, Blake has no family of his own, and has become close to Trent's parents, whom he visits often to make sure they are being treated well and have everything they need. Trent's family has considered him their second son after a time.


3. Chance "Daring" Darrow - A cleric of the realm. Chance was quite the troublemaker in his youth, lifting coins, catching the affections of high born ladies, and winding up with barrels of ale that belonged to local merchants. Finally, his parents had enough of his antics and told him he was either to join the military of House Sterling, or the clergy. Disheartened, Chance had resigned himself to a tour of duty in military service, but at the last second he discovered among the pantheon of the realm there was one deity, whom few worshiped, that was the god of wine and song. He became a member of the church the following day.


4. Alistair - A knight of House Varick from the neighboring province of Ahren. Alistair is strong, arrogant, and high born, raised in an environment steeped in politics and machinations. Traditionally House Sterling and Varick have been rivals, and their animosity has only increased over the past two hundred years, with each House probing for weaknesses in the other. While on the surface, they claim to be allies dedicated to cooperation for the good of the realm, their history of conflict, crude or crafty, is well known.


5. Risa - A knight of House Drascovic and first in line of succession for Lordship of Drascovic's holdings. She is educated, strong, and proud, but is known among those who serve her for having a cool head and a level of humility rarely found among knights. Her family means everything to her; her father is ailing, one of her brothers was born nearly blind, and the Drascovic lands have suffered incursions from marauders who have raided rural settlements on the border from the cold pine forests to the far north.


6. Captain Brasher - The Captain of the Guard for House Sterling. Wise and venerable, he has spent his life in service to his House. More than one have met an untimely end at his blade by underestimating his prowess and thinking him as little more than an old man. He is charged with commanding the guard to keep the peace within Sterling's province. Lately he spends most of his time overseeing the training of new guardsmen, attending official functions, and grooming those under him for command when he retires.
Edit: I was looking over the rules, and I just wanted to say that this post isn't trying to drum up extra attention for my game (though any enthusiasm is nice!) --- I really just want to throw my creative process out there, and establish a record of my drawings so that I can look back after some time and hopefully see marked improvement!
Last edited by a moderator: Aug 14, 2013