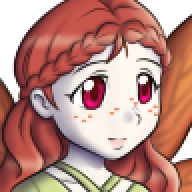 Not sure if it's been mentioned or not as a quick search has not turned up anything.

I was working on creating some sprite sheets and editing them in GIMP however once I got to the point where I was ready to edit the damaged character sprites I noticed that all three of them were identical. I generated a new sprite just to double check that I didn't mess something up and it looks like the issue is with the generator itself.

I don't think this is by design as having three identical downed / damaged sprites doesn't make much sense to me. I would've expected the three most common downed sprites that is usually in the RTP and most requested in the forums for spriters to create. Just to note, this is not including the side view sprites as I'm not sure if they need to be the same for battle animations or not. This is in reference to the sprites that are generated when clicking the Damage Character button.

For an example of what I mean, compare the downed sprites from file Damage4.png in the character add on dlc to that of the downed character from the generator.

Not sure if it's a bug or if it is something that was intentionally left out to be added in with later dlc, but I thought I'd mention it.

I suspect it is intentional.


Damage1, Damage2 and Damage3 all follow the same pattern. If anything, Damage4 is the inconsistent one.


I would have liked if they could have the damaged characters in different positions too.


I'll log it as a request and we'll see what they say. I believe the answer will be no, because of the sheer number of changes that would be required (every generator part as well as all of the Damage# sheets that have already been created).
Last edited by a moderator: Nov 18, 2015
You must log in or register to reply here.
Share:
Facebook Twitter Reddit Pinterest Tumblr WhatsApp Email Share Link

Not sure what to call the shrooms, but they eat you up inside for a week, and then they leave you with suicidal thoughts or something. I'm not sure yet.
Turns out our homegirl got an accidental whiff of em.
6 minutes ago •••