Downfall FES Re:Boot is a PC remake of Downfall FES, an RPG I had made on RPG Maker Fes that was popular on Miiverse before it was close, using MV as the engine. The game takes place in a post-post-apocalyptic time in a self-sustaining underwater tower called Cetus Tower. The player plays as Amadeous, a Utopian Operative (sort of like the police of the Tower) and is thrown into the game with no other foreknowledge of the game's past events. The game's past events are told as the player plays the game in the form of collectible journals known as Data Discs- there are 27 Data Discs in all (and none of them can be missed as owning all 27 is required to reach the end of the game). Amadeous was assigned by the mysterious Operative #1 to deliver a just-as-mysterious package to a little village on the surface world. The game is his journey to deliver it.

The Demo, which was made for the 28th Birthday Release Something event, only allows players to complete the first two floors of the Tower (B20 and B19). 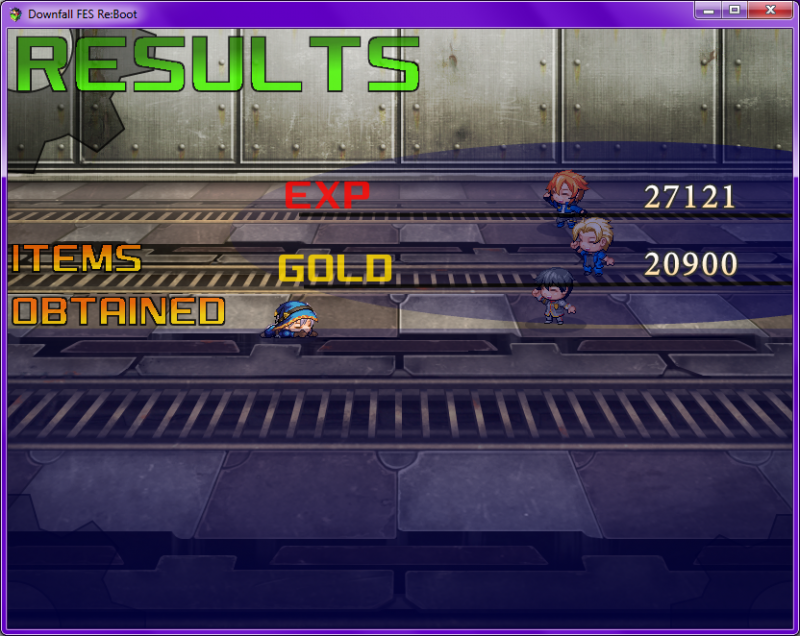 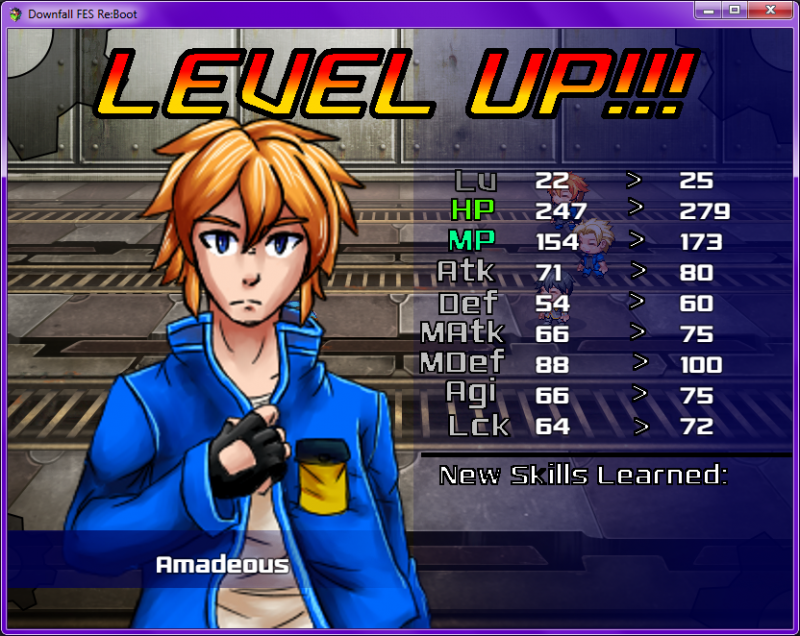 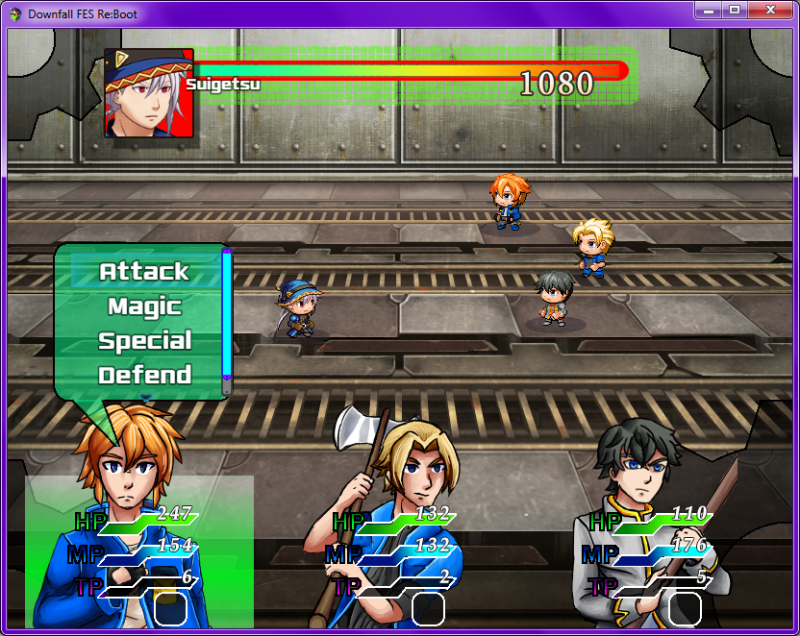 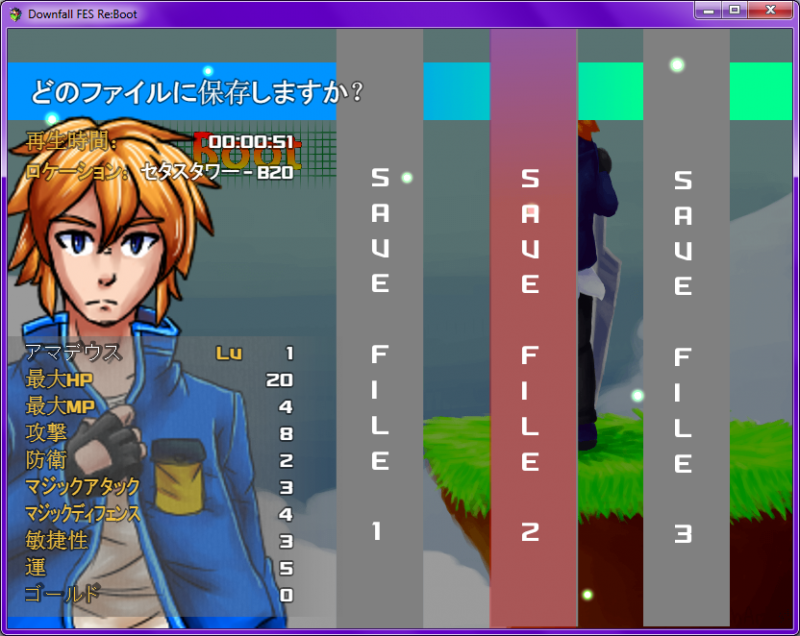 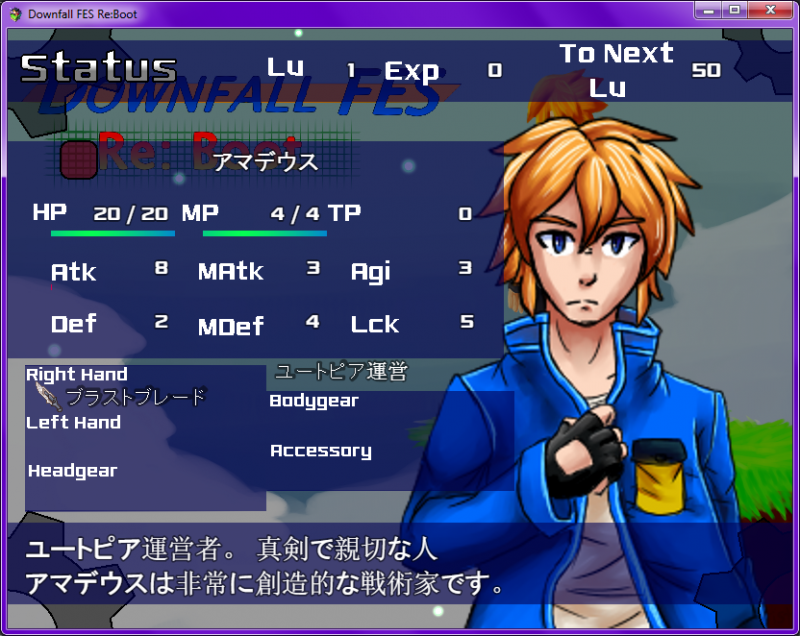 I gave your demo a try, but since it's so short I couldn't get a really good feel for the game. I do have a few comments on some things though.

First thing is that you may want to look for a different way to package your game, because right now it causes crashes! I wanted to turn the music off, but if I tried to change things in the settings menu then I'd get an error. I also couldn't save, which wasn't a huge issue for such a short demo but for a full game saving is pretty important.

​
You should also check out the order of your plugins, since currently the title screen menu shows up over the credits menu and makes it hard to actually read the credits. 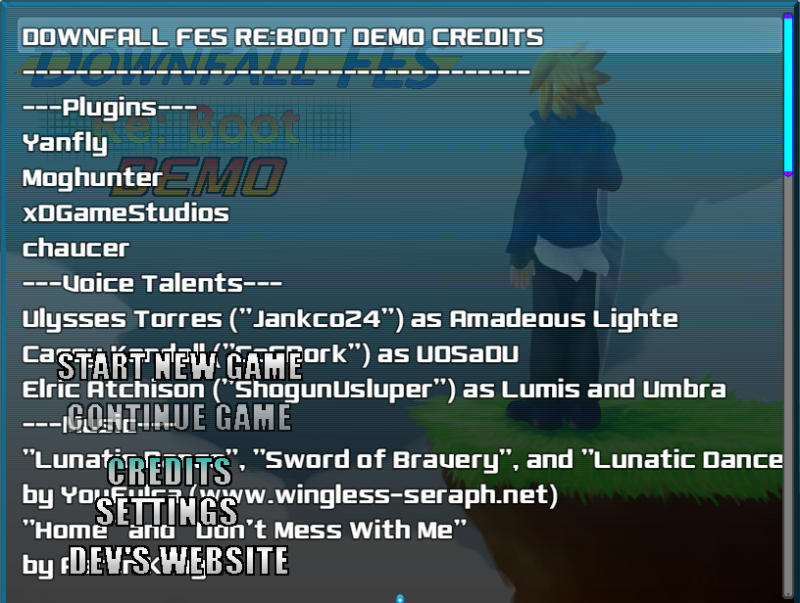 ​
I didn't get to have enough battles to get a feeling for them, but I did find the grid patterns used to be a bit too bright. It made it difficult to read some things, so maybe either desaturating them or putting a solid color background behind them would help.

I found the Data Discs playing after I get them and while I'm walking through doorways to be actually more annoying than helpful, if I want to know the info then I look at it as soon as I get the item (so it replaying in the doorways is just a bother), and if I didn't want the info then I don't want it popping up later. Instead, why not play it right away when I get the item, and then the player still has the option of rereading it later?

This is just a minor thing that I thought was odd but isn't all that important (so don't feel like it's something you've gotta change). If UOSaDU is a robot, why doesn't he look like one at all? Even Umbra (or Lumis, can't remember) called him a 'tin can' which means he must clearly be an android, but to the player it's impossible to tell him from a normal human. You could add some more robotic features to him to make it more obvious.

@hiddenone Thanks for the feedback. I'll try to answer your feedback as best as I can since I am not on my PC right now.

I used Enigma Virtual Box to pack it, step by step, exactly has SumRndmDde's tutorial showed, so I honestly wouldn't know what went wrong there. Maybe you know better ways I can pack it.

The Yanfly Credits thing will be completely replaced with a end credits movie at the end of the full final version, so you won't see that bug in the full version at all. It appears like that since I'm using both Yanfly's and Moghunter's plugins together (if Yanfly had a battle cry plugin, this wouldn't be the case)

Yeah, the grid pattern is a bit bright- mainly because I am still trying to figure paint.net out after dropping Microsoft Paint.

That was actually just supposed to be a contingency in case the player never reads them (plus this is how I had to handle the Discs in RPG Maker Fes since in Fes, items couldn't call events on their own). Though Disc A's use of it can be justified to explain why they are collecting them rather than just to lower gates.

Finally, as for UOSaDU, a guy's gotta keep some stuff secret for full version, right?

Updated the DEMO to Version 1.1.

Changelog:
The demo will not contain the HUD overhaul that I have discussed with @hiddenone . This is because the demo and full version are two different project files.

Now that the RSW event is done with, I have updated the post to be for the full in-development game with a link to the demo download.

Decided to test out the game, but I've already encountered multiple problems before getting past the first map. :\

I would list them, but I think it is due to the fact that on your Downfall FES website the download link only contains the executable and not the full zip! Hopefully you can resolve this issue! I believe in you!

Gonna test out the download link on this page and see if it's different!

Edit: This link has the full pack, but now it won't launch for some reason? :\

@SmashArt What errors come up now?

There are no errors, it just won't launch. I click on it, my mouse shows its loading and then nothing happens. :\

@SmashArt Try deleting the exe and file and rextract it?

I replaced it with the other exe file I got from your website and now it works, no more crashing on the settings menu and now I can save! Hooray!

I'll be sure to give you feedback, hopefully my criticism won't demotivate you!

Glad to hear it.

Alright, I've played through it! It was pretty surprised about how short it was but that makes sense since you wanted to get it out for RPG Maker 28th event! Here are some pros and cons I found while playing, don't take anything too personally, just look into it and see where you can improve! I know you can make this game even greater, mostly these problems are easily fixed!


Overall :
Downfall FES Re: boot Demo is a fun short game with lots of potential, it mostly needs just some small tweeking, but it's so far been fun to play and left me wanting more! Since this is your first project on RPG Maker MV I am thoroughly impressed at what you've done, and I hope you the best at completing it!

Thanks- all of the music isn't copyrighted and I made double and triple sure, only using music from here (it came from YouFulca, and his music is free to use with credit). The HUD is different from the demo (see "Screenshots"). Purify Slash being underpowered was a Fes conversion flaw, and I plan on buffing and its TP cost. All the other cons, but infinite UOSaDU heals I've already fixed.

SmashArt said:
no need to use potions at least not as far as the demo goes. Thankfully I won't have to spend hours to beat an enemy that has way too much HP
Click to expand...

let's just say the game's optional boss, Brjost, will quickly invert everything you know. He embodies suffering and knows just how to do it- poison, any percentage attacks that hurt a lot but can't kill, and when he's ready to end a life, a basic attack alone is sufficient enough after all of that. Not to mention he also has 6.66x the amount of health as the final boss does- Brjost in ReBoot is exactly how you feel when fighting Sephiroth in KH1...

I think a hard optional boss is a great idea!

Language support has been dropped, because apparently, some people say I shouldn't use Google Translate for the translations of the game...