Draw Animated Actors in any Window

AnimatedActorsWindow v1.0
Jeremy Cannady
Introduction
This script will allow other scripters to place animated actors in any window.

Currently the game allows you to draw faces and characters in windows.

This script will add the animated battler with any motion to a window and will animate.

In this script http://forums.rpgmakerweb.com/index.php?/topic/52062-ark-save-engine-251-final-addons/   the actors on the save file would be moving instead of a still picture.

How to Use
Put the file in your plugins folder.

Example of using the function:

This will draw the first actor at position x=0 and y = 200 and the animation will be walk.


I didn't feel like releasing but let me know if you find it useful. 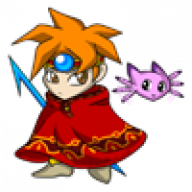 Seems a little hard to implement properly on my plugin now. I will have to adapt and import your animation methods, to understand them, and make it able to be preloaded as I'm doing with the old version.

By the way, in this currently version the next animation image do not erase the one before it, them the pictures appear clearly one over the other, never erasing the one before them. Looks animated, but you can see the previous position behind the actual, what is a little ugly. For the first instant I thought I could only release a pach and this would work like a nice addon to the core plugin, but this will not work properly that way... So I will have to study it well and adapt to use it properly T-T.


Thank you very much for this script! ^^
You are awesome!

PS.: Is there a way to erase the circular shadow below the actors?
Last edited by a moderator: Dec 18, 2015

Well you only need to draw the actors one time and not on an update.

If you redraw them all the time then it will keep adding sprites.

Froggo32 Soulrender Froggo32 wrote on Soulrender's profile.
I have to ask, who's on your pfp? The character really reminds me of Edgeworth from Ace Attorney lol. I'm really curious.
3 minutes ago •••

Puffer
Not RM related but I've been working on this for the past 2 months as a student project. Now that it's done I can finally go back to do some mapping lol. Here's a clip of it.
Yesterday at 11:31 PM •••