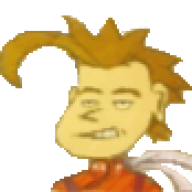 Looking into making enemies resistant/immune to a status effect after it's applied.
Haven't found any plugin's of the sort so I imagine it's able to be done in engine.
Kind of like Etrian Odyssey.
Any help in the right direction is appreciated.

Unless I misunderstood the question, couldn't you just give the state in question a trait that sets the state rate to 0% for the given state?

For example, give your "Poison" state the following trait: "State Rate Poison 0%".

Be careful though that the skill that applies the state is not set to "Certain Hit" because this would ignore any State Rates.

There is also a trait to resist a state: 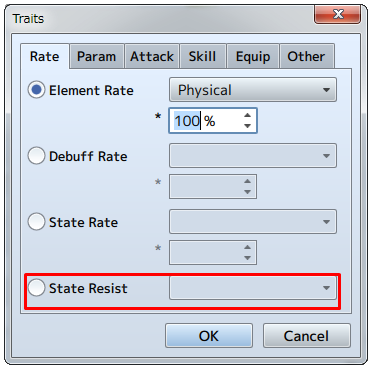 @stramin
I believe this would not work because State Resist also removes the state that is currently active already, which the OP did not ask for.
(Not 100% sure though and can't test it right now)

I guess ill make double of each stat effect, one that is the normal state and one that adds a resist state i guess.

ScorchedGround said:
@stramin
I believe this would not work because State Resist also removes the state that is currently active already, which the OP did not ask for.
(Not 100% sure though and can't test it right now)
Click to expand...

Good to know about this, I going to test it later

My approach should still work:

Be careful though that the skill that applies the state is not set to "Certain Hit" because this would ignore any State Rates.
Click to expand...

Based on this example, your Poison would make the afflicted character immune to poison while still retaining the poison that is currently active.

Just replace "Poison" with any state you need.

I also attached a screenshot of the example just in case

Right, if you want the "resistance" to last longer than the effect of the state, then two different states is the way to do it. If you want the resistance to last the entire battle, don't set a number of turns or actions; just have it be removed on Battle End. If you don't want to show the Resistance state, set its Priority to 0 and give it no icon.

Be careful with your use of Recover All because that will remove all states (including the Resistance states). The only way to change that behavior is to use "Permanent States" plugins. Or, you can work around it by using complete HP and MP recovery, as well as specifically removing normal states (but not Resistance states), wherever you would have used a Recover All command. 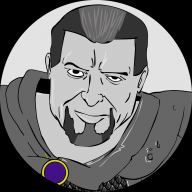 Hopefully not necro
You could make the poison die down on its own, over time, but still leave the state at indefinite
Something like this may work (though I am not a codesmith)
(original idea borrowed from Yanfly T&T)

EDIT: Just realized that not everyone in the world uses Yanfly Plugins....this may need some of those

AeroPergold
here's another RPG Maker remake idea: "Plumbers Don't Wear Ties". I'll salute to whomever does this
56 minutes ago •••