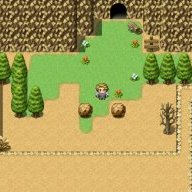 Hey folks, I'm doing some Golden Sun like stuff and tapped into my first problem trying to realize the use of skills out of menu to let the event in front of me react to.

What I'm basically trying to do is to freeze a puddle in front of me into a pillar of ice using a Frost spell.
I mean, when I use that spell in front of a puddle, it should freeze. If I use the skill random on map, it should do nothing but an animation played. I tried to achieve that via common events and position variable check, but it either fails due to some direction thing (only works for one side of the puddle) or the common event stopping to work properly once I stepped back and forth the event.

So I thought, maybe someone knows a solution for this, to make an event an field object which would directly react if a certain spell is casted in front of it. I truly know it might be possible with common events though, but after two days of trial I thought I could ask if theres another possibility.

In this video you see the tree thing being moved with a Move spell. That's basically what I try to achieve, to interact with events through field skills.

Any help would be a welcome thing

it should be doable by events alone - in fact with events should be easier to do this than plugins, and I can think of several ways to handle this.
so perhaps you should show us the events you made, and we try to tell you where your mistakes were.

Okay, I attached the skill, the events surrounding the test event to be manipulated, and the common event of the skill.

In the skill common event, you start with two control variables to get player X/Y.
Then four conditional branches (disable else) to check facing, and depending on facing you add or substract 1 to x or y to get the coordinate of the tile the player is facing.

if there is an event there, then you can use the event ID to determine which event it is, and decide if the skill should do something or not based on that.

Thank you very much, I will try this out.

Do I have to get location info on each conditional branch then? Do I have to add a list of all events the sills supposed to work on then?

Love that part complex system one has to create and think of ;D

I think you misunderstood what I wrote, please consider working through tutorials on eventing - some of them are linked in the starting point tutorial in my signature.

as for deciding which event is which, that depends on how you differ between them. for example you could use the meta command (see help file) to read the note of the event to check what it is. That way you don't need lists at all.

Okay, I came so far. But I did not find a solution to check if the event has a certain note in it. Thats the only missing thing I can't figure out, along with putting on self switches of this event. The rest works just fine so far, thank you for explaining me.

All things I read is to check a CERTAIN event id's note box, so maybe you got another clue for me?

Prellmarc said:
All things I read is to check a CERTAIN event id's note box, so maybe you got another clue for me?
Click to expand...

that is exactly what I was talking about.
you make the note in a way that it can be read by the meta function as described in the help file, and substitute the variable which contains the event ID for the event ID in that function.

Sorry for not checking sooner, but in RMMV the meta command was listed in the official help file (the one accessed through the editor) under documentation - plugin specifications.
But that entire section is missing in the help file of RMMZ, it does not give any specifications about the javascript commands provided by the engine to help access the database and the events.

it basically was an object command that enabled you to read specific tags in the notebox without having to go through the regex options yourself.
and since many of the commands in RMMZ were changed, I can't tell you how to do it in MZ either.

Darn, I see, okay. I thought I checked a wrong help file.
It's okay, thank you for your help