Failing to initialize the game data/Map001.json 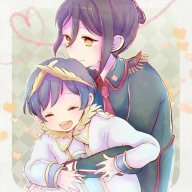 I just finished installing Yanfly's plugins, however when I went to test my game I keep getting this error... Any ideas what's causing it/how can I fix this?

Thank you all,
Alkaline 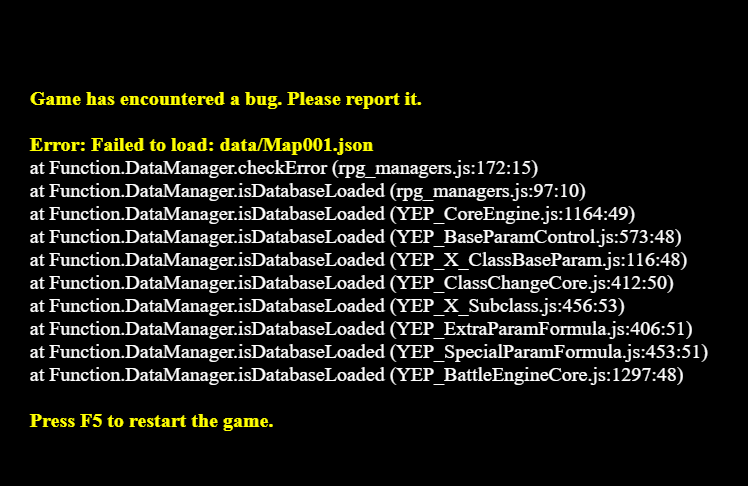 Oh my apologies, this is my first post I didn't know where to find the proper place to post it...

Don't worry about it, the blue text is auto-generated, it's not a personal message.

One VERY common issue that causes issues with Yanfly's plugins is having them in the wrong order. If you go to Yanfly's site, where you can see the list of all the plugins, you MUST have them in the same order as they appear on that page.

So go check that, make sure they're all in the right order, and try to run again. If you still get an error, please hit F8 to open the Developer Tools, find the Console tab in the window that appears, and grab a screenshot of that and post it here. Also post a screenshot of your Plugin Manager (or several screenshots, if you have more plugins than will show at once).

I followed the order as indicated on the website when listing the plugins. This error shows up when I run the game even before getting to the Title Screen 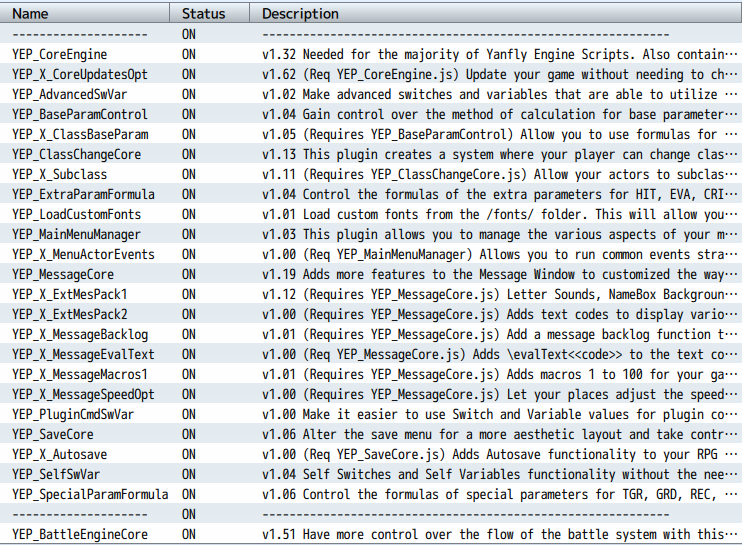 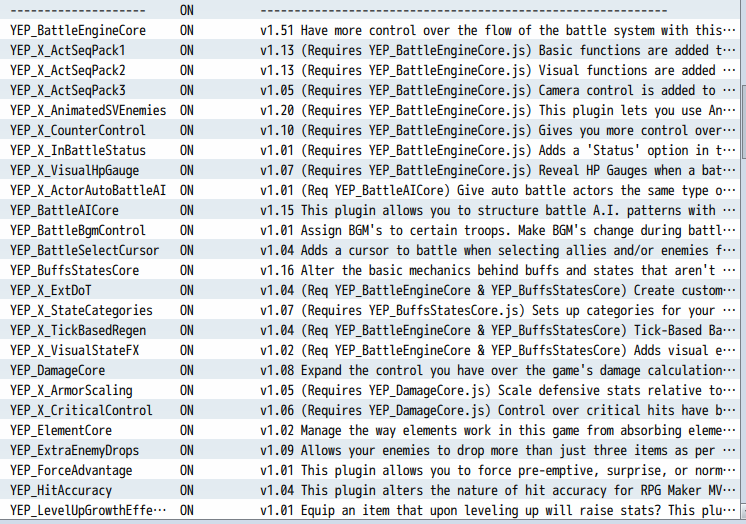 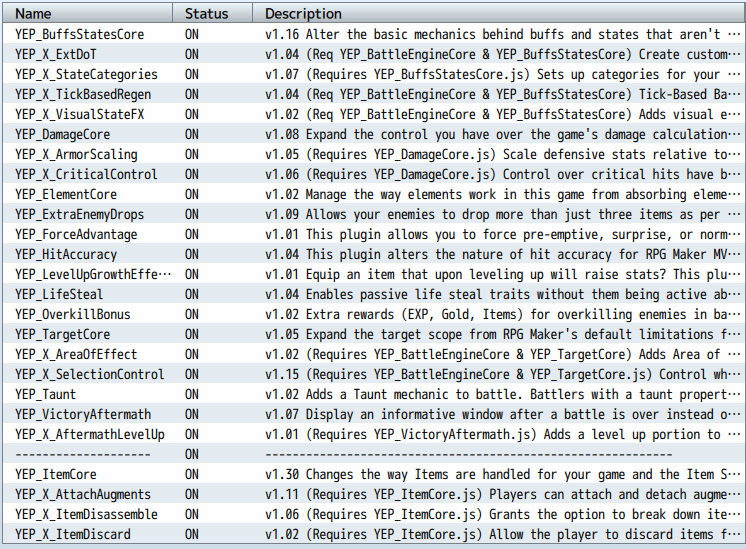 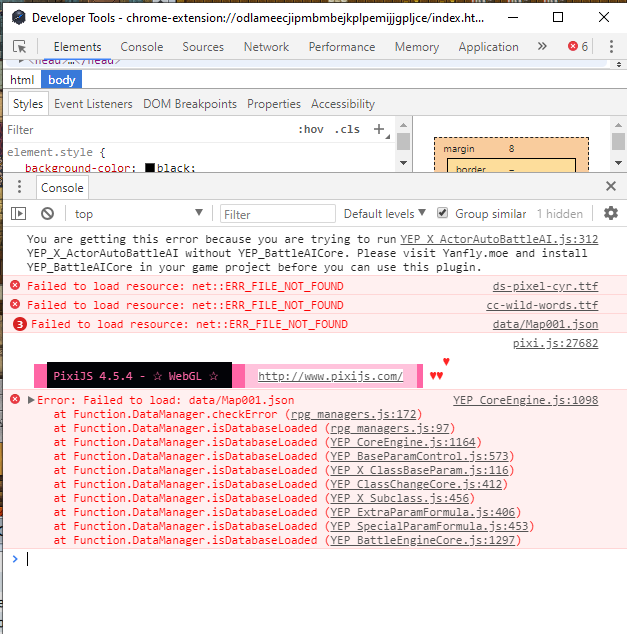 Okay - see that error screenshot? See the very first message there? "You are getting this error because you are trying to run YEP_X_ActorAutoBattleAI without YEP_BattleAICore"

So you are missing one plugin that another one requires in order to work properly.

So go find that plugin and add it to your project, making sure it's in the right place, and try again.

Can you also check your project's data folder and make sure there IS a file called Map001.json in there?

The AI battle core was just misplaced i fixed that. Map001 doesnt show up on the data folder for whatever reason. This is weird because before I added the plugins the game was running just fine. I am still getting the same error

So did you delete any maps? It's trying to load map 1 for some reason, and it's not finding it. The others are probably just additional issues that we've discovered while troubleshooting this.

Do you ONLY have YEP plugins, or do you have others as well that you haven't shown in your screenshots above?

You could just create a new map in the editor, and it'll probably name it Map001 if it's not already there. But it'd be good to know why it's trying to load it, and what's meant to be on it.

Maybe check your recycle bin and see if there's a Map001 in there anywhere. If there is, create a new map in the editor, check that it's called Map001, save your game and exit the editor, then go and restore the old one from the recycle bin so you've got the original content. THAT might let you then load your game and run it without errors, and you can see what Map001 was originally for.

Also, both of these statements can't be true:

Alkaline said:
I followed the order as indicated on the website when listing the plugins.
Click to expand...

Alkaline said:
The AI battle core was just misplaced i fixed that.
Click to expand...

These are the only non-YEP plugins I have. The whole thing about the AI battle core was that after putting the plugins in order and getting the error I tried to bundled up the cores together. When I went to put the cores back in their proper place I had misplaced only the AI battle core.

What confuses me is that before adding the plugins the game would run normally and I made no changes to the game itself, such as adding events or adding/removing maps

If you turn all plugins off are you still having the issue? Did you try the other things Shaz suggested with the map file?

Hyperly
I'm moving on from RMXP finally. I've been stuck in a difficult decision between XP and MZ, and I've given up and moved on to MZ. Overall I'm really liking it, I wish tilesets were easier to setup like XP, but it's actually not that bad!
51 minutes ago •••