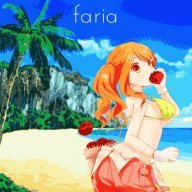 Taking the role of Renee Dawntide, Starfall tells her tale as a Heartbearer; carrier of the Heart of the World. Alongside her fellowship, the vast narrative covers the lives of an extensive cast of characters in a world being ravaged by an increasingly lethal climate, as they all embark on a journey northwards toward the Alter of All on White-Moon Zenith.

Faria I: Starfall delivers a subtle blend of freedom, high-octane combat and a laser-precise, long-deliberated narrative that takes you on an adventure beyond your wildest dreams. It is an experience that surpasses all tropes and expectations to present an open-world players will truly care for.

. A thrilling and extensive adventure that's free from artificial padding such as grinding or repetitive tasks.

. Combat; approach creatures you see roaming about to begin a fight. The battle system is a careful combination of real-time strategy and speed! Fear not for the misery of "game-overs", however.

. No leveling; the benefits for doing so are three-fold. Firstly, it eliminates any possible need or desire for "grind". Secondly, it allows myself as a developer to craft more unique combat scenarios and situations the player must adapt to on the fly, without them grating against the established "rules" that a levelling system may inflict. And thirdly, it means characters and their roles and positions in battle are more defined.

. Crafting; whether you want to create age-old relic replications or prepare a tasty stamina-restoration jam for extended battles, the system has been carefully refined and streamlined to avoid the unnecessarily complicated quirks and cumbersome requirements often associated with crafting systems.

. Dungeons; no adventure is complete without peril - or puzzles for that matter! In your travels, you'll be tested in a variety of ways above and below ground in ways you may not expect; from heart-pounding chase sequences to tip-toeing your way past ancient sentinels.

. Harvesting; you can buy all your ingredients from the various stores in Port Faria and beyond, but if you're willing to put in the leg-work, you may roam about mining mineral deposits and picking berry-bushes to obtain most of your required ingredients for free.

. Freedom; it's an open world with no fast travel. The maps here are broad and filled with much to discover. Five minutes into the game, you are free to explore Port Faria, the Blueridge Mountains and the encompassing lands in-between. Making this world feel alive with an array of NPCs that were each individual was the biggest undertaking, but it all pays off.

. A happy fantasy; Faria and The World is a realm free from political corruption and a billion bandit organisations that take to plaguing each and every highway. It is a place where unity, love and honesty form the core principles of all its freepeoples and that everyone is equal in the eyes of the Goddess and each other, regardless of one's race, creed or birthplace. Unless you're a stinky orc. The game begins in Port Faria, which is pictured below (minus events). Here's a little GIF for scale:

If you would like to view more screenshots, open the "spoiler" below. If you would like to try the demo, the details regarding it can be found within the "spoiler" below.


The demo is coming soon and will be served through PMs.

The demo contains a fair slice of what is expected from the finished game. As far as polishing goes, it should be squeaky clean. The entire purpose of releasing this demo is primarily so I can receive feedback regarding gameplay mechanics and how you all feel about the story progression; anything, really.

You'll have the open-world of Port Faria, the Gold Coast, Mea Huna Isle and the Blueridge Mountains to explore. That includes all the open-world bosses, overworld secrets and stuff like that. You'll also have a good portion of the story to experience, which is a journey that will take you through Seabell, the Greatroad to the West, Acacia, Glitterbrook, the Jaded Plains, the Voluminous City of Ava and more.

If you have any troubles, relating to any aspect of the game, do not hesitate to alert me; no matter how miniscule or large it is.

Things you should know:

. The quest directive for your Starshell Crab quest is not what it appears. I would never actually design a quest to be that monotonous, but follow it and you will be swept away.

. The demo ends following the events of Glitterbrook, which (minus side quests and other activities) may take upwards of ten non-padded hours of gametime.

. When you save, it notes your location on the save file. The location displayed is that of my map-name in the editor. This will be rectified when the game is finished.

The file is an encrypted .exe file. Your anti-virus might give it a scan, but that's okay.
And of course, the credits...

These are just off the top of my head, by the way. The full game will feature appropriate credits for the aid of all the wonderful people that made the creation of this game possible.
Love,
Faria x
Last edited: May 21, 2017
You must log in or register to reply here.
Share:
Facebook Twitter Reddit Pinterest Tumblr WhatsApp Email Link

Candacis
Kitchen counters! I am on my second version of counters. It is slow going and I always see little details that could be done better. Have to force myself to say that's good enough for now and continue on.
Yesterday at 9:26 PM •••

CraneSoft
I always thought I was just really, really bad at communication, then the internet proceeds to say "lol no".
Yesterday at 8:24 PM •••

TheoAllen
Cursed problem: Multiple language switches. Say, you want to switch to EN language from JP but you have no idea where the language switch in JP menu language.
Yesterday at 5:49 PM •••

Prescott
Tonight I'm finally going to start putting the dungeons my team has made on grid paper into the engine. That's the final step of making the game world.
Yesterday at 5:34 PM •••