Hello fellow creators.
First of all, let me introduce Jun, a character whose game style and abilities are based on fighting game mechanics! 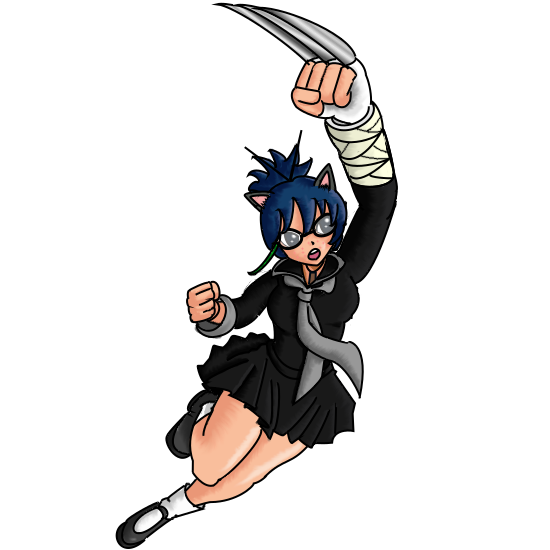 She also has the passive ability "Combat Aura" that works basically like a Beserk, where less health you have more damage do your attacks. This is already incorporated into it and I do not think it will change it.


Now, i have some ideas to make her skills, i have this 3 sets of possibles Skills:

First Idea:
Do their skills that inflict little damage, but that she has the passive ability to make 3 attacks in a turn. "OMG that is Overpowered" could you say and I agree. However, as I said, their abilities do little damage. The point is that I think of doing this as a mechanic of "doing combos" with weak attacks and finally finishing them with a skill that, with a common event, changes a switch so that the passive skill that gives more than 1 attack per turn is turned off . Disadvantages: I could use 3 items in a turn, and that would be unbalanced. And i dont know if the "Action Number +" would Stack.

Second Idea:
Do the following skills:
Grip: Makes 2 times more damage than a normal attack and ignores shields.
Combo: Hit an enemy 3 times. this makes a total of 2 times more damage to an enemy.
Haduken, like thing? : throwing a projectile of energy.
Disadvantages, is a very basic skill set without inspiration. personally this is my least favorite idea, but the most obvious and easiest to do.

Third Idea:
Make a skill set consisting of movements that do 1.5 more damage than a normal attack, and that also give attack levels and lower defense. or vice versa or in general, that modify the parameters of the fighter. This idea is a bit more based on exploiting to the maximum its passive ability "Combat Aura", to modulate the defense and make attacks that cause more damage and to have less life to obtain the benefits of the passive ability. Disadvantages: This is what least resembles the mechanics of a fighting game. But what else works in a rpg style strategy game.

Finally, it is important to emphasize that I am using the Yanfly's Auto Passive States Plugin. Also I want to clarify that I would not like the incorporation of any skill that makes counterattack, since another of my characters already has that role, plus there is a mechanic available for all my characters similar to the Limit Breaks Final Fantasy. So the idea of filling a meter to make powerful attacks was discarded.

Thank you in advance for your ideas.
I'm open to read ideas!
Once more, sorry for my broken english.

@NatuElChido Please note that Game Mechanics Design is not for feedback on individual projects. Also it is engine neutral so cannot take individual plugins into account.

You have several choices.
1) This could become a general discussion at a more conceptual level. This would mean that replies need not address your specific game.
2) You could post this in Ideas and Prototypes .
3) If you want to know how to achieve this using that particular plugin this thread could be moved to JS Plugin Support.

I want it to be in General Discussion.

I like the second idea! Yeah it may be the most boring, but it seems more practical to me. The abilities may be obvious and boring, but are also obviously useful. With the ability to hit distant enemies and pierce shields and do multiple attacks, I'd gladly stick Jun in my team.

Mix 1 and 2? Can combo with basic attacks and specials. If your skills are up to it you can make certain actions " break " the combo, or certain skills cannot combo off others. For example, using the item command always ends the chain. Cant attack, fireball, fireball.
Turn Jun's limit break into a mini game. Was thinking of Zells from final fantasy 8. If you don't watch the video, basically give the player basic commands to perform to execute the move.

This is a tough question, because essentially you are trying to fit the "feel" of one genre (Fighters) into the mechanical framework of an entirely different genre (JRPGs), a genre whose players notoriously tend to shy away from the speedy input and button flurries that Fighters tend to employ. If Jun is an optional character to include in your party, then this isn't as big a deal (since the player can choose to "opt into" this style or not), but even so, it's important not to make sure that her mechanics fit into your larger system.
What you need to try to do is capture the spirit of a quick-hitting, combo-based character, while staying completely true to the mechanical design of your RPG. There are definitely ways you can do this. I can think of two possibilities offhand:

1) You could slightly rework her Combat Aura passive, where instead of dealing more damage with each hit as her HP gets lower, she instead attacks more times as her HP gets lower! For example, she will hit once (with an attack or skill) if her HP is above 75%, twice if her HP is from 50-75%, three times if it's 25-50%, four times if it's 10-25%, and a whopping six times if it's below 10%! (This doesn't mean you pick six actions, but rather that the action you picked will strike six times.) Not only does this mean more damage, like her current combat aura, but it also means more chances to land status effects, and more procs of on-hit effects (like healing herself or stealing an item when an attack hits). This could be done with some fairly simple plugin scripting, or by using a bit of coding within Yanfly's Action Sequences.
2) You could consider a "combo" system that works across turns, rather than relying on multiple hits during the same turn. For example, you could have many or all of Jun's skills apply a state called "Combo" to any enemy they hit. (By using a Stacking States plugin, you can allow this Combo to increase each consecutive time Jun hits an enemy!) This state does nothing by itself, but many skills' formula or common event will use this state to determine their effects. For example, one of her skills might deal minor damage normally, but if that enemy has the Combo state applied (meaning Jun hit them last turn), the skill instead deals higher damage and also poisons the enemy! This can be done using formulas and common events alone, although you can add some flair to it using Yanfly's Action Sequences.
She's a really cute catgirl character, by the way!
You must log in or register to reply here.
Share:
Facebook Twitter Reddit Pinterest Tumblr WhatsApp Email Share Link

Rest in Peace, Sir Clive Sinclair
1940 - 2021
Entrepreneur, Technologist, Father of the British Computing Industry, and protagonist of Legend of ZUN.

Without you, England's games and tech industry wouldn't be where it is.
9 minutes ago •••

SoftCloud
Woof, haven't touched any game-making elements in a couple of weeks I think.
49 minutes ago •••