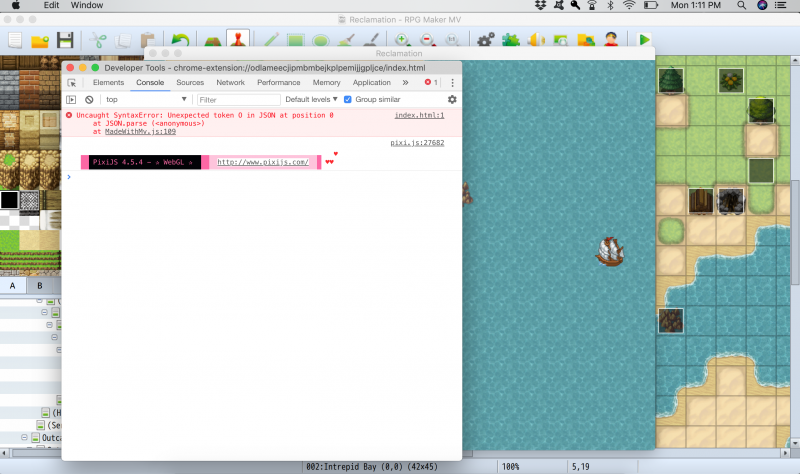 I used to be able to transfer between these maps, but now it freezes on some maps upon transfer (it looks like I've moved a space from the edge, the transferring between maps in my game sends you one space away.) I can't open the main menu either, but I can move the cursor. What's happened?

Hmm.. Im not sure, but tou have tried to remove the made with mv plugin?
Also, try to click in the error to show us what the code says

Ah, I've figured it out! Battles seem to not be able to activate if you're in a vehicle, but they were meant to start every seven maps the players explore. Whew!

The Made With MV error is from the splash screen plugin - it has nothing to do with what happens when you play the game, and likely was logged the moment you launched the game. Check if the plugin has parameters and if they're set correctly, and make sure you haven't modified the plugin in any way.

If you can't move and can't access the menu, it means you probably have an autorun event somewhere that isn't turning off. This could be an event on the map or a common event. It could be an event that doesn't even have any commands.

I doubt it has anything to do with being in a vehicle or entering battles, unless you have an autorun event set up to handle your battles (and then it should probably be a parallel process event, not an autorun).

It is an autorun, but finishing the battle is meant to trigger a switch which stops the battle from triggering again until you explore another seven maps. It must be that though because the freeze only started since I added the event. Do you know if you can initiate battles from vehicles? From experience it seems like you can't, which is why I created the event.

You shouldn't be able to initiate battles from vehicles.

Can you please show a screenshot of the event? Make sure to include the entire event window, and not just the list of commands. Also, if there are several pages (if it's a map event) please show each page.

Ah, well that's probably the problem. I've attached the first six pages (the rest follow the same variable pattern.) Any workarounds you can see to initiate battles while in a vehicle? The player is exploring 49 maps in the ocean in a ship which is why I created this event. There's the occasional island they can explore, but the foes are jellyfish.

oh wow ... that looks complicated! And a few errors.

What changes variable 29? How many times on the map do you want to battle jellyfish? Is it just one battle every 7 maps, or should there be several battles while on every 7th map? What is switch 176 all about, what does it control, and what turns it off again?

For starters, I wouldn't increment in 7s. I would increment until it reaches 7, then set it back to 0. This means you can have ONE event page and don't have to do 6 (so far) of exactly the same thing just because the variable changes.

Then I'd change it to a parallel process event rather than autorun. Autorun is for things like cutscenes, where you don't want the player to be able to move. Depending on where switch 176 gets turned off, from the moment you hit the 7th map, you're going to be entering battle after battle, or one battle, then freeze completely.

However, don't make those changes yet. First answer those questions I asked you, because there could be an even better way to do what you're trying to do. Perhaps give screenshots of one of the events that changes variable 29, and the event that is conditioned by switch 176 and the event that turns it off again (which could be the same event).

Sorry for the late reply, work's been pretty hectic.

As random encounters don't occur while exploring in a ship, I was hoping to make an event that causes a battle to occur every seven maps.

Switch 176 is automatically triggered after the variable goes up to six upon entering a map and after a conversation is shown between the party members. I think this must be why it's freezing as the game is skipping the battles and endlessly trying to turn the switch on on auto-run. Nothing turns it off at the moment.

Unfortunately I can't reset the distance variable that easily as a couple of other things are dependant on the variable, such as conversations between the party members (which happens every six distance) and causing the player to lose (which happens once the variable is equal to 42.) 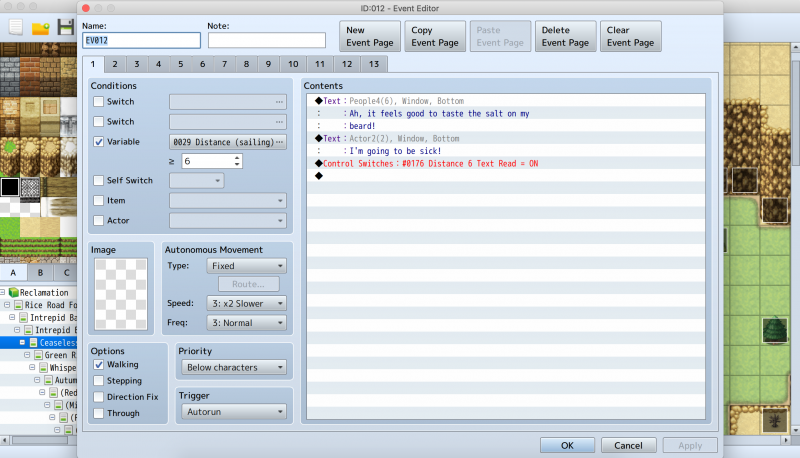 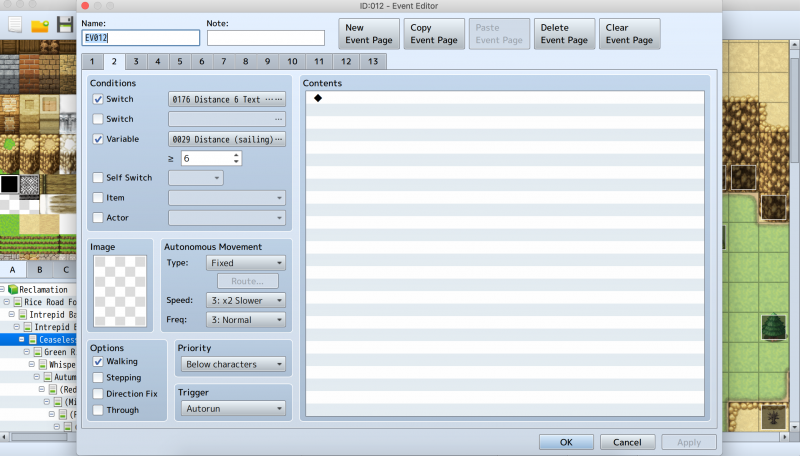 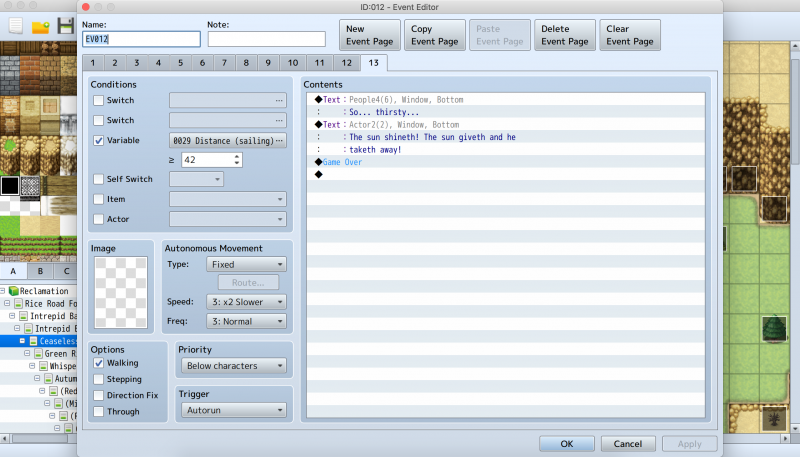 Then use another variable and recalculate it every time you change the distance.