Notice:
Damage Control's development of Fusion was currently paused for some certain purpose. It seems LeonardPlaysMC was having a long trip to Manila for awaiting for his upcoming trip to America. But seriously, this game will continue for a long time, and it's still alive and kicking!

The longest developed RPG game for at least 6 years!
Created by LeonardPlaysMC

"Fusion" is the longest developing game from Damage Control for almost six years. It was developed by Mike Leonard Cabagnot (LeonardPlaysMC), and the development process was still running until today. "Fusion" was based on Mike's imaginary adventure with his fellow high school classmates and friends in his hometown, Sevilla, Bohol, Philippines. It consists with good storyline in combination of anime-related scenes and a hint of Filipino pop culture and wattpad-related references.

In the year 2026, Monera Region--a legendary island far away from Asian countries-- was in a great danger since the deadly superweapon, The Radium Blaster, fires up to the southeastern part of Monera. The one who plans this were the infamous dark army Bureau of National Evil Society (BONES) with tyrannical leader, Lacrima Shashenahtzee. On the other hand, four promising heroes -- David, Ash, Nichielle, and Jessica -- team up to save Monera from BONES' devastating invasion with the use of Tech Magic, a kind of magic generated
from AI on its powerful device, Tech Magic Braces. From criminals, to cyborgs, and even giant robots and drones, the heroes will fight and conquer with this new kind of magic coming from the powerful energy source of Tech Magic, Project Fusion.

> As of Beta V1.5j and above
- Basic gameplay as usual
- Side battle events
- Custom graphics and sprites
- Enemy Book included
- Scaled enemies
- Can name any main character that they met
- Too many pop culture references (as of NPC's and sprites)

Notice:
The Beta release ends with these messages:
[This is the spot for the next story soon. More updates to come for future beta release!]
[You are in the end of the beta release. Thanks for playing Fusion!]

Instructions:
1. Extract this .zip file.
2. Open Game.exe.
3. Enjoy!
4. If you find any bugs and glitches, report these at Fusion's thread in RPG Maker Forums. (here, of course)
5: DO NOT MODIFY ANYTHING IN THE GAME FILES UNLESS YOU NEED TO ASK PERMISSION BEFORE DOING THAT!
6: Please refer to the text notes inside the .zip file for deeper info.

The Map of Monera Region (Not in-game screenshot, but it's just for reference) 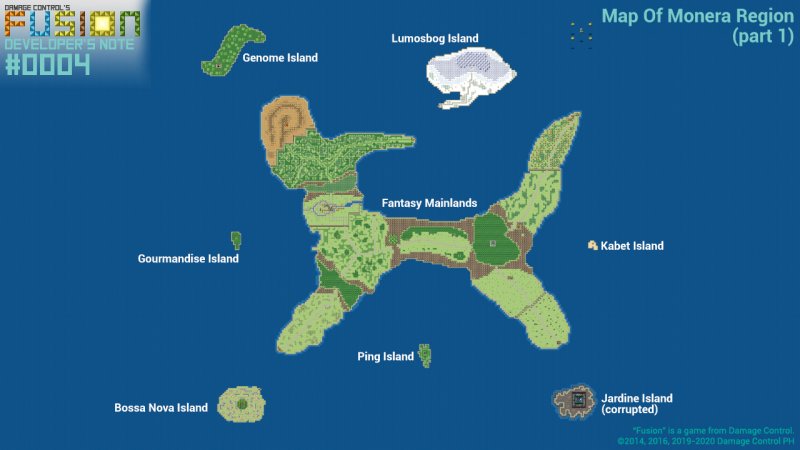