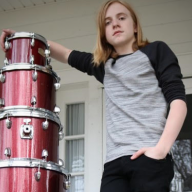 Hello! I am Noah Denton, the head Developer of a J-RPG that is in the extremely early stages of being made! We are currently at a stage where our team of writers are still working on a story, and a few artists working on character design. We will then move on to hosting voice acting auditions, etc. This game Will be made in RPG MAKER MV.
I am currently working on this game, but would like for more devs to help me work on it, because I cannot take that whole work load on at once.
In the project, I am currently just starting out, but as it stands, I will be taking care of most everything about the game. I take care of database, mapping, scenes, testing, battle, etc.

The game will be called, The Last Crescendo, and will be about a young man named Caprice, who grew up orphaned in a poor neighborhood.
In this world (Skaena) people do not use magic to fight, but rather, things known as Relics. Relics are musical instruments that can summon familiars known as Musicorum, which are used to fight.
Musicorum can range from Minotaur, to sprites, to basically any creature.
Throughout the story, Caprice will begin to learn that he is what's known as a Crescendo. Most people in this universe can only Soul-Link with one Musicorum in their life time, while people that are Crescendos can link with multiple.
Crescendos are a rarity in this world that were stomped out by the emperor in fear of their potential, that they might overthrow them.

CrowStorm
well, I definitely have a type, cute redheads with medusa piercings, met and hit it off with two of them in the last 72 hours, what does it mean lol?
Today at 11:41 AM •••