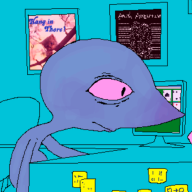 (the prefix is MV but please ignore that)
Here's a HUGE idea for a game I'm dreaming about but have no time or resources to make. Hope someone else likes it enough to make this thing real!!!
Sorry in advance for mistakes I make bc English is not my first language.

LISA fangame: Olathan Trail (the other name I suggest is "The Remedy") 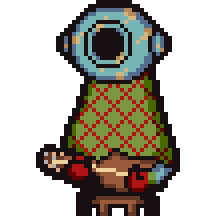 The plot:​
You are Bo Wyatt. One day, you receive a letter, promising to develop a cure for your mutant brother, but in order to do that, you need to travel across across the country. With all your savings, you purchase a van big enough for you, Henry (and his long ass neck) and two more people, and go on adventure.

Game mechanics:​
Similar to The Oregon Trail, the majority of game is managing resources as you go. On stops, you can barter, scavenge and earn money. I know, I know, this is not an RPG, but I assume it would be possible to make on this engine!
Resources:
Bo and Henry and their possible companions need food, the van can break down, and sometimes people get sick or injured. In addition to this, Henry can go into psychotic episodes (randomly or when the "sanity" gauge depletes). To counter this, you can either take a stop to subdue him (which can lead to you or companions being injured) or use tranquilizers. I think there should be three different types of meds: tranqs, painkillers and antibiotics.
Other possible resource I suggest is Joy, which is much more common than any other medication and could be used instead of them. However, it causes dependence, and using it leads to a worse ending. There could be random encounters that can lead to you or your companions randomly becoming addicts, "thanks" to "kind" donations from masked men.

Stops:
On stops you can scavenge, barter and earn mags. Also, you can hire and disband companions.
Scavenging: This mechanic is similar to Lasagna Boy, I guess. You search for stuff trying to remain hidden (bc Bo sucks at attacking). You can search for resources and items (they can give you additional bonuses, such as your van moving faster, or hunger gauge depleting slower, these kinda things).
Bartering: sell and buy items. Easy.
Earning: This one is a little tricky. I imagine this mechanic to be a mini rhythm game (you're a bard, duh). I've seen people implementing rhythm mechanics on RPG maker so I hope it can be done.

Random events/encounters:
While you drive, you can come across something interesting. Or crash your van (try driving with a diving helmet on and youll crash too). Some events require you to make tough decisions.

Companions:
There's still some space in your van to take two people aboard. Companion require food and medications, but they can give you some really good perks. You can disband them on stops. Also, they can die if their HP depletes.

Here's a small list or possible companion ideas:
Fardy: your van moves faster, woooo! Also, if you crash, Fardy will be the only one who gets injured. His drawback: depression makes him hungry, so he consumes more food (two rations instead of one or something like this).
Garth: earns you extra money on stops, and he's good at it. You sing, he draws. His drawback: requires a hefty sum to hire him initially.
Jack: earns you extra money, but sucks at it. It's pretty inconsistent. But he has no drawbacks and is free to hire.
Yazan: has a unique way to instantly pacify Henry: KAT, THE KITTY. I have two ideas for Yazan's drawback: 1) He takes up two slots so you cannot hire someone else OR 2) There are unique random encounters that have a chance of injuring Kat. She doesn't have a separate HP gauge, so injuring Kat means injuring Yazan. He just loves her too much. Yazan is free to hire.
Ajeet: As an avid Joy hater, he supports your cause, and he will help you search for any medication which isn't Joy. His drawback: I don't know. He certainly won't let you have Joy in your inventory, but this isn't exactly a drawback, given which perk you get.
Harvey: helps you negotiate better, so barter prices are lower. Requires less food, too. His drawback: hes a fish. I think there should be a random encounter, or an event when your food depletes, where Harvey gets eaten. Maybe even eaten by Henry, why the hell not. That's be a tough decision to make. He also requires some mags to hire.

This is an incomplete list, I think it needs more companions. Maybe someone who could help you in rhythm sequences or in scavenging or makes food for you on stops.


Endings:​
The Good Ending: You and your companions reach the destination. While mutations cannot be undone, a new treatment course lets Henry partially regain his consciousness and even some music skills he had before. With that, the Wyatt brothers are once again united and starting a new exciting life as a travelling band. (requirements: no joy at all or/and all your companions are alive)

The Meh Ending: You and your (remaining) companions reach the destinations. There you learn that mutations cannot be undone and you brother will remain a mindless monstrosity, but you, as a bard, can control his behavior by playing music. Bo becomes somewhat of an urband legend, living in the huge abandoned building, having his brother kill everyone who poses a threat to his peaceful solitary life. (requirements: this is the best ending you get taking Joy or having companions die.)

The Bad Ending: This is the ending you get if Henry dies. Bo just offs himself. What happens to companions is up to interpretation.

The Absolute Horrid Ending: This is the ending you get if you die, and everyone else survives... well not so much actually, because Henry goes feral and turns your companions into a bloody mush.

There could be other endings and game over scenarios as well.


What if I want to use this idea?​
If so, you'll make me the happiest man alive. Myself, I don't plan to make this game anytime soon, but if you liked my idea you're free to use it. You can change whatever you want, but don't forget to credit me.
This being said, I personally would prefer you keep the good ending :') I want at least one person in this universe to have a good life, dammit
You must log in or register to reply here.
Share:
Facebook Twitter Reddit Pinterest Tumblr WhatsApp Email Share Link