So I realized after 6 months I've been using v1.0 of Galv's pixelmove plugin. I wanted to update it to the latest version, 1.2, to fix the issue with Move Event movement.

Problem is, no matter what I do, my game refuses to update the plugin in-program. I've downloaded the updated version twice now, opened it in notepad to verify that it is in fact v1.2, but after copying and pasting it, deleting it and placing the new file in, my game always shows it as v1.0.

ForestLogic said:
my game always shows it as v1.0.
Click to expand...

Do you mean your game (when you are test playing), or your project in the editor? Can you show a screenshot of the Plugin Manager side by side with the folder where the plugins are stored?

Can you try closing the editor and reopening it?

The plugin-manager in the editor shows 1.0, and the mechanics of the plugin reflect on it being 1.0. I'll get you a screenshot momentarily.

So you can see here, that's my plugins folder for my project. You can see the plugin open in notepad shows it as 1.2, but meanwhile no matter how much deleting/redownloading and refreshing the editor's plugin manager always registers it as v1.0. 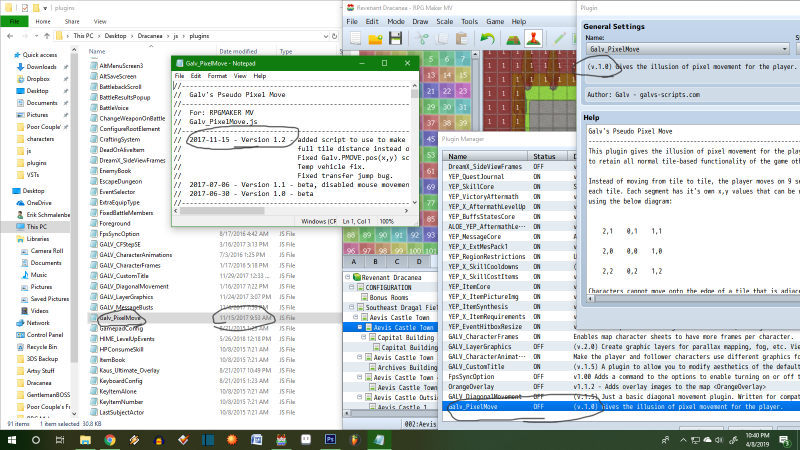 What happens if you right-click the plugin in the Plugin Manager and click "refresh"?

That's what I thought, so I even tried editing it to v1.2 in plugins.js. But like I said, even after updating it, it lacks functionality that v1.2 has. (specifically Move Event moving the hero with regular tiles instead of using pixel movement.)

Is there any way to like, completely redo my plugins folder that might fix this? What happens if I delete plugins.js? I'm also wondering if it's an issue with the plugin file itself.

Here it is, if anyone is interested in testing themselves.

Well, I've never used the plugin so I wouldn't know if update 1.2 no longer works in current RM version since the plugin is 2 years old, but I can tell you, Galv just forgot to change the version number on the short description on the .JS you sent! 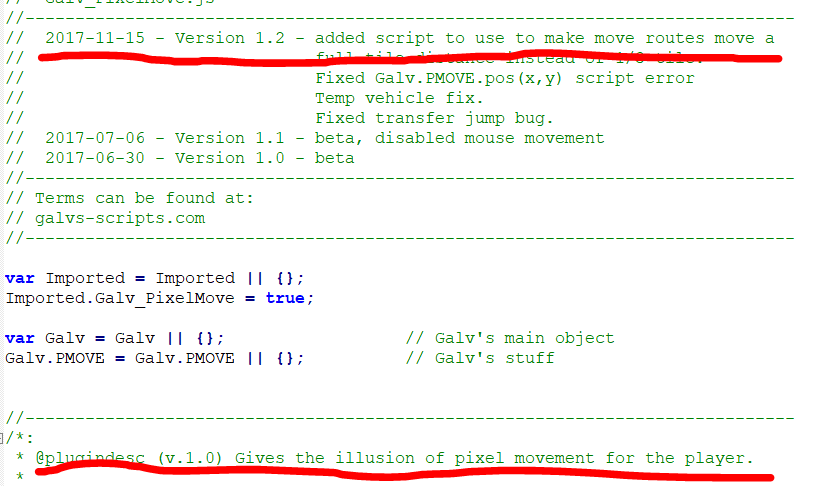 Interesting... I'm running into the same bug though with Move Event, which is why I even looked into it in the first place... (Like, technically I can get around it, but having to multiply every hero's movement by 3 is pretty irritating.)

In the actual plugin manager, it still shows all the info for v1.0 though with nothing about the bug fixes, so I'm not sure if it's as simple as that... or is it?

ForestLogic said:
Interesting... I'm running into the same bug though with Move Event, which is why I even looked into it in the first place... (Like, technically I can get around it, but having to multiply every hero's movement by 3 is pretty irritating.)
Click to expand...

I just tested the move event function, and from what I can tell, event does move a whole tile while actor only moves a third.
I'd say it's intended since it works with events at least?


ForestLogic said:
In the actual plugin manager, it still shows all the info for v1.0 though with nothing about the bug fixes, so I'm not sure if it's as simple as that... or is it?
Click to expand...

What is written after // is just comments, so it's like it's not even there. He does have a "KNOWN ISSUES" list, which seems to list something about vehicles which could coincide with 1.2's "vehicle temp fix".

I guess all that can be done is someone popping in to edit the plugin so actors are also affected to move one whole tile on move event, or you could try another plugin that functions similarly to Galv's but moves both events and actors a whole tile, or do the 3 moves.

I'm not sure if this works for a whole tile on move event, but I tried this one and I like it:
https://forums.rpgmakerweb.com/index.php?threads/altimit-pixel-movement-0-50β.85408/

Yeah v1.2 of Galv's was supposed to fix the issue where the actor/hero would move a whole tile, just like events.

But Altimit's sounds good too! Does it support diagonal movement/sprites though?

Actually having done a little research, Altimit's plugin doesn't sound like it's for me since it's not compatible with YEP Region Restrictions/parallax mapping. The workarounds people use would be too much of a headache.

I guess worst case scenario is I could continue using Galv's, and just multiply every hero move by 3, but man is that a pain in the ass.

Are there any other good pixel-movement plugins you could recommend?

I did just forget to change the version number for this one, sorry. You have the latest file.

This can be seen in the plugin documentation, you have the latest version. This isn't a real "pixel movement plugin" - it only emulates it for the player.

Oh my God, I am so sorry dude lol. I didn't want to be one of those people, but I didn't realize it was controlled via a script call. The way I read it on your site, it sounded like it was an automatic feature in v1.2.

bgillisp
2 huge market drops in 2 days. So glad I sold my non-dividend stocks about 2 weeks ago. And if the dividend ones drop heavily, hey more cheap stocks for me!
25 minutes ago •••