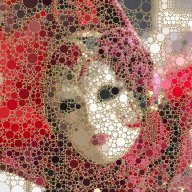 Hopefully this is the correct location for this.

1) My game seems to have some stuttering during movement.

I'm using somewhat large parallax images (one map, for instance, is 2400x2880, or 50 by 60 in the map properties) instead of tiles because I wanted a custom look (and I can do graphic design), but that isn't what was causing the lag. The game ran fine with just the parallaxes. I think it must be how I'm doing my events that is causing the jerkiness. Maybe I have too many parallel events or something, but sometimes when the player is walking, the map will jerk a bit every few steps.

My maps have a parallel process binding pictures to the map (using the TDDP plugin) for parallax mapping and one to change the tint based on a day/night parallel common event I set up. I put wait 60 frames at the end of my parallel processes and erase event, but this doesn't seem to help. I tried removing the wait, but that didn't help, either.

I was attempting to use the Terrax Lighting plugin, as well (as a parallel process with erase event) which makes the issue worse. However, removing the Terrax Lighting plugin and the tint parallel processes does not correct the jerkiness entirely, particularly if I do several map transfers back to back. As in, if I go in a building and exit a couple times, it's a lot more jerky.

The game does not generally start out jerky/stuttering, though; it becomes increasingly so as I transfer between maps and then sort of caps off at a certain level of stutter (which is too jerky and can't be ignored, at least not by me).

2) As an aside, another issue I seem to have with my parallax maps is that when the game loads, it shows a random corner of the map (usually in the upper left) and then jumps to the character. I don't know why.

I use a parallax map attached to the map itself in the map's properties, and then, because the map doesn't show up unless I also do this, I bind the parallax image to the map using the bindpicture plugin (set to below_tilemap) and then I may have another image layer for the tops of things (like trees, buildings) so the character can move behind them and things seem 3D (set to above_characters), and then on some maps I may have a picture layer that is just fog or a vignette around the edges of the map.

These, alone, didn't seem to cause my issue. Something else is, but I don't know what.

3) Finally, my parallax images were also sticking around on map transition for a bit, so I added an "erase picture #" for them to every transfer event and also a fade in and out with a 60 frame wait so you wouldn't see them before they disappeared.

what version of MV are you running? There used to be a memory leak.

Have you tried having F2 running in the background to see your FPS? Maybe you can see what is triggering the FPS to decrease.

Grunwave said:
what version of MV are you running? There used to be a memory leak.

Have you tried having F2 running in the background to see your FPS? Maybe you can see what is triggering the FPS to decrease.
Click to expand...

Do you see anything about my setup (these are my only parallel processes, really) that could be improved?

Am I setting up events the wrong way, or is my parallax mapping done incorrectly?

When you updated, did you manually update your project as well? Updating MV only updated the editor, but when your game runs, it uses the original scripts from the version you had when you created the project, unless you manually update.

If you go into your project folder and open the rpg_core.js file, what version does it show at the top of the script?

I don't see anything wrong with your parallel processes - they're fairly simple and you're erasing them at the end. If the game starts to lag and you just hang around a bit, doing nothing, does it eventually come good? Or does it stay bad?
Last edited: Oct 6, 2018

Shaz said:
When you updated, did you manually update your project as well? Updating MV only updated the editor, but when your game runs, it uses the original scripts from the version you had when you created the project, unless you manually update.

If you go into your project folder and open the rpg_core.js file, what version does it show at the top of the script?

I don't see anything wrong with your parallel processes - they're fairly simple and you're erasing them at the end. If the game starts to lag and you just hang around a bit, doing nothing, does it eventually come good? Or does it stay bad?
Click to expand...

I did do the manual updating of the js files, although I didn't update all my downloaded plugins (wasn't sure I need to?), just the default program ones.

My framerate doesn't appear to even drop much. It drops during map transfers quite a bit, but it stays between 50 and 60, even when the game becomes choppy. I've tried standing around for a few seconds but that doesn't seem to help, and if standing around for minutes is necessary to make the game not choppy, that seems unplayable.

When you update to a new version of core files, you should check to see if any plugins need to be updated as well. Some of them won't, but some of them will.

Open the task manager and see if your game uses more and more memory as you move between maps.

It doesn't use more memory as I go between maps.

In fact, map transitions drop it down to around 7%, and then it rises as the new map loads (to around 15-25%, generally). The highest it averaged seemed to be about 30%.

What's odd is that it doesn't always happen.

Just now I tested it, going in and out of a building map that commonly causes it to stutter, and it didn't do it. Other times, it does it as soon as I get through character selection and the game drops me on the first map, or when I move from the first area to the second area. I honestly can't tell what exactly causes it.

Naturally, the Terrax Lighting plugin may be a main culprit, but I had it on just now and it wasn't causing lag. My Inn area does have a bunch of parallel processes for animated candles (they won't work just by selecting the walking/stepping boxes), but those parallel processes have a clear event command at the end of their last pages.

Perhaps my parallax maps are the issue?

AeroPergold
I realized I kinda have a habit of making threads and sometimes not thinking them through. I should work on this.
6 minutes ago •••