Game thinks my character is lv 0

Made a quest with Character level as a variable and it didnt work. to troubleshoot i made an npc with the text script
"your level is \v[2] (2 is the variable number) and it says zero, even after manually setting the starting lv to 3.
any advice?
edit: i even made an NPC that just gives me levels, and the value still shows up as zero. 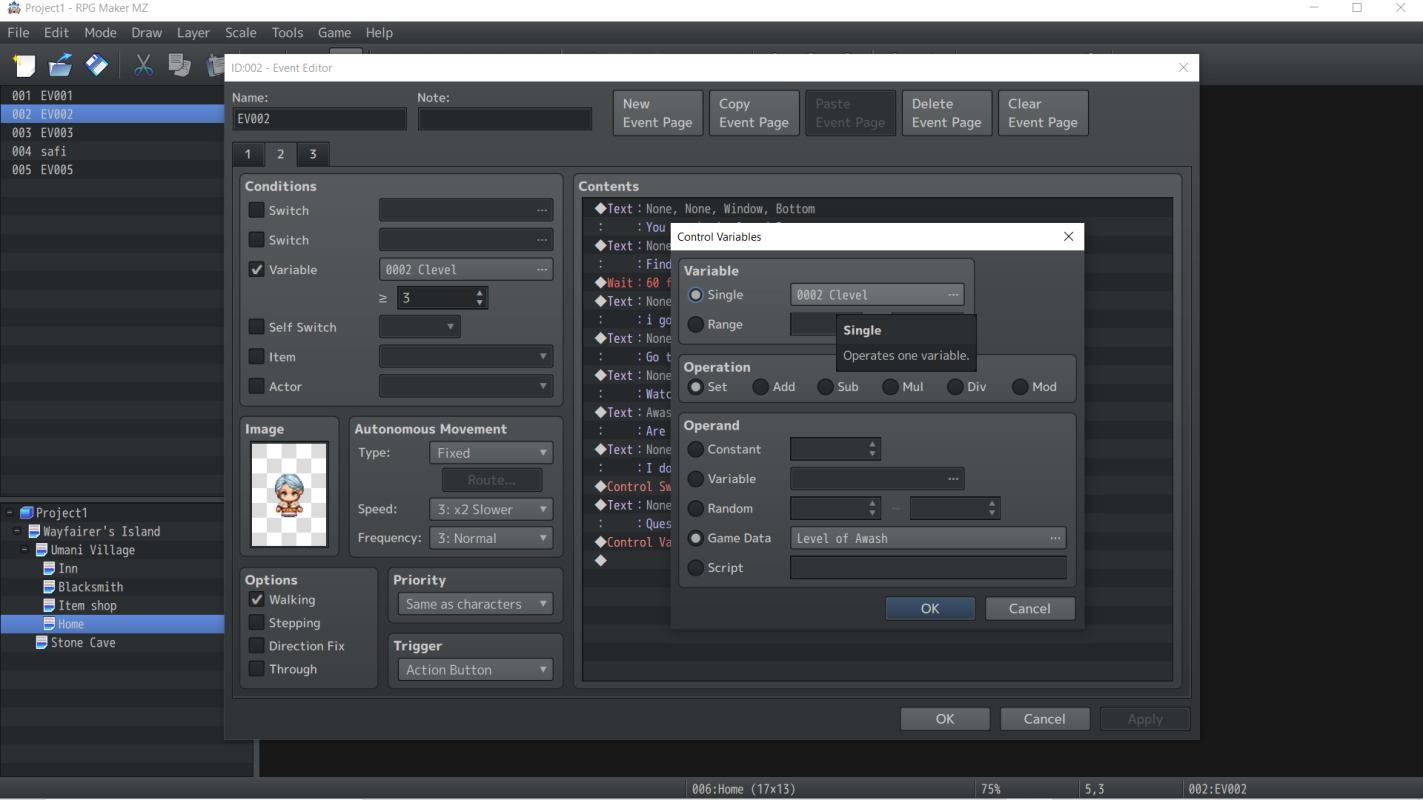 
What are you using for the quest - a plugin? Please add a link to that as well (though I doubt it's anything to do with the plugin)


edit ... you can't have an event page conditioned by a variable being a certain amount, unless you have SET the variable somewhere else first. If the character's level is less than 3, this page won't even be active, so the Control Variables command right at the end will never be run, and the character's level will never be put into the variable.
Last edited: Dec 2, 2021

Where are you setting this variable to Clevel's level? Is it in another event? A parallel process? It's not inside of the event that already requires the variable to be 3 or higher is it?


What are you using for the quest - a plugin? Please add a link to that as well (though I doubt it's anything to do with the plugin)

I havent started playing around with plugins yet, i just got into this a couple days ago.
Yeah, the character is currently the only party member. im sure it is something simple.

Is this the only place you are setting that variable? It won't work, as I explained in my edit. You can't have an event page conditioned by a variable, if the variable has not already been set somewhere else.

VegaKotes said:
Where are you setting this variable to Clevel's level? Is it in another event? A parallel process? It's not inside of the event that already requires the variable to be 3 or higher is it?
Click to expand...

you lost me, im new and kinda dumb. this is a snip of the event page.
Criticism welcome.

Okay so like Shaz said. The conditional variable on that event will prevent that page from showing up unless the Variable Clevel is equal to 3 or more.

Which means that unless the variable is 3 or greater *NOTHING* on that event page will happen. Not even the very top item which is setting the variable to Clevel's level.

Either an autorun event or a parallel event or a common event, an old lady player touch based event, literally anything that will update the variable to Clevel's current level *before* they can interact with this event.

appreciated guys. Follow up question. what would the command to update current level look like?
Id rather not just overwrite it to set @ lv 3, and im at a loss how i can pull this of smoothly.

Edit: i figured it out, in case anyone ever has the same problem i just added a random level variable to a already existed npc that becomes a party member. just made the party member required.
you guys are great.

So one of the things you can do is set a parallel process inside of the Common Events tab.
First you have to activate a switch somehow. Autorun event that erases itself, switch that player clicks to advance, Old lady who runs into the player and then explodes...whatever. I usually name such a switch "BG Checker" because it "checks" things in the "back ground."

In the Common Events tab I have a common event that is set to activate as a Parallel Process whenever "BG Checker" switch is turned on.
And then inside of that Common Event you can simply set "Variable Clevel to Actor Clevel's level."
And it will continuously check it, updating to the new value whenever Clevel's level changes.

Other options include simply setting the variable to the Actor's current level before any interaction that requires it if you don't want too many parallel processes going on at once.

I would also not use a common event. I would simply check what the level is, on the event that needs the actor to be a certain level. Which means don't use it as a page condition.